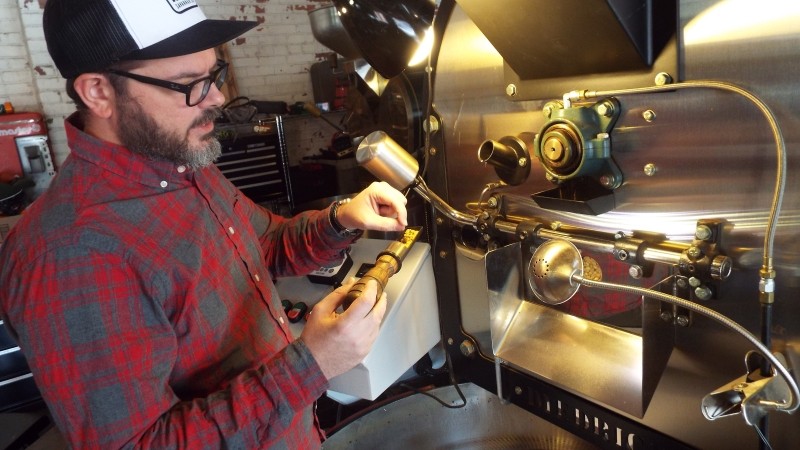 There's something about people with vision. They have an idea. They're not wavering from it. The wind blows. They stand firm.

Often these people are called “too serious” or “snobs.” They need to “lighten up” and “bend a little.”

When these people are doing bad things, we don’t have to like them. But when they’re doing great things, we can celebrate.

And lately, serious coffee man Philip Brown of PERC Coffee has been on a lightly roasted, caffeinated tear.

“We’ve had a lot of great success both in the local arena and lately also stretching out of Savannah,” Brown says. “That’s been really cool.”

Just four years ago, he was roasting, selling and delivering his beans himself (on a bike!) from a small storefront on DeSoto Row. Only a handful of shops were brewing his beans.

Now, PERC is all over town, his beans are in Atlanta and Savannah Whole Foods, he’s working on Florida and North Carolina outlets and he has a spacious shop on East Broad Street. And his coffee’s wonderful.

Still, he seems to worry that people will think that he has a superiority complex because of what he will and won’t do with coffee.

“I want to celebrate where the coffees come from and the differences the coffees have,” Brown says. “And the only way you can achieve that is by roasting a little bit lighter.”

In other words, he doesn’t supply the darker French or Italian styles.

“Initially, I had French roast, I was going to do it,” Brown says. “But I just couldn’t. This is something that I won’t drink and I won’t like. And I don’t necessarily need to do it.”

Of course, you can do whatever you want to his coffee once it’s yours. Chocolate and hazelnut just aren’t his style.

But he’s another visionary beverage seller who has certain “will’s and won’t’s” (specifically, wine regions) that speak to passion and commitment.

“Depken was really helpful because he had gotten some great advice from people and just said, ‘No, stick to your vision,’” Brown says. “I started a business based off of a culmination of 14, 15 years of developing theories about coffee and bringing in these really terrific coffees.”

Brown got these ideas from working his way up from being a barista in Athens to managing coffee shops there.

“You can never just master coffee roasting,” Brown says. “You have a lot of theory and experience and then you fine tune with every batch you roast.”

That’s because many different beans can be roasted many different ways. Brown and his assistant Spencer Perez might roast and brew dozens of coffee samples before bringing one into the PERC family.

“Usually when we slurp the first slurp and it’s ‘the one,’ a lot of times we’ll look at each other and we’re kind of like, ‘Yes! Get the phone!’ We know it,” Brown says.

Brown shares this nerdy coffee enthusiasm in many ways—from barista training to weekly Friday cuppings for the public.

“You establish a bond of trust,” Brown says. “And with that trust, you can ask them to make bigger jumps.”

Brown himself has made many leaps in his business. Here’s hoping he can make his next jump... just the way he likes it.