Barbecue master spills his secrets—well, just a couple of 'em

Hear this and other interviews by Orlando Montoya at savannahpodcast.com

WHEN SAVANNAH barbecue champion Wiley McCrary spilled his secrets in a cookbook earlier this year, many people rightly focused on the cooking techniques shared in its pages.

And yes, Wiley’s Championship Barbecue: Secrets That Old Men Take To The Grave, co-written with his wife, Janet, and Amy Paige Condon, will do you wonders in the kitchen.

But how many times a year do you smoke meat or make barbecue sauce? Me, once, maybe. I’d rather leave it to the professionals.

No, when I cracked open his book, and later interviewed the man himself, I discovered sage advice for more than just aspiring pit masters. 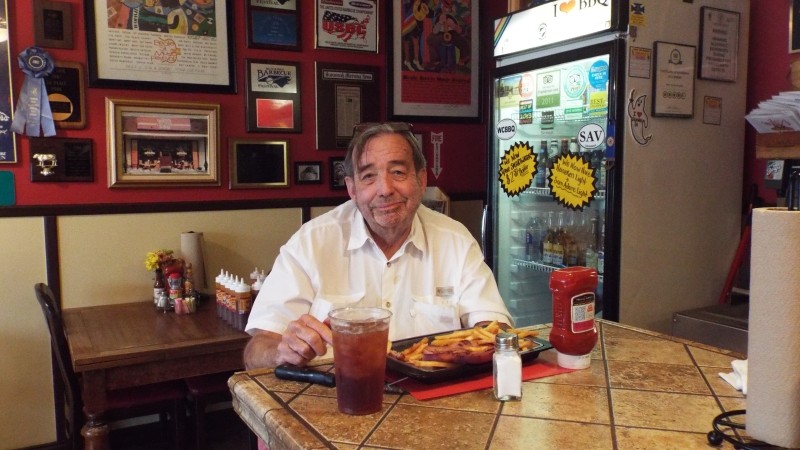 Wiley McCrary: 'We were a bunch of good old Bubbas hauling around a poor old grill. Now it's much more sophisticated.'

“Oh, my goodness,” McCrary says. “Can the restaurant business teach you? Yes, because you’re putting up with other human beings. And it’s not the easiest thing to do.”

A restaurant is often called a performance space. It’s where happy smiles to customers are on one side of a line.  And the high demands of a business are on the other.

McCrary deftly has been dancing that line ever since his father made him the “grill boy” at corporate schmooze events in their backyard on Lake Lanier. He sizzled the steaks.

He later went to work at his father’s food and beverage distribution business until the elder McCrary sold the business.

“It was like giving me a badge of freedom,” he says.

He struck out on his own with a successful Atlanta catering business that he ran for decades. That’s when he caught the barbecue bug. He started entering professional competitions. You now can watch these expensive contests on television.

“We were just a bunch of good old Bubbas hauling around a poor old grill,” McCrary says. “Now it’s much more sophisticated.”

But winning a few early championships made him cocky. He had to lose a whole bunch more to make him take a step back.

“If you’re going to take it to the heights that we’ve taken it, you need a mentor to teach you the ways of the professional,” McCrary says.

So McCrary made friends and decided to travel the country with pit masters Ed and Muriel Roith of Happy Holla BBQ in Kansas City. They taught him the craft’s finer points, like temperature and consistency.

He had other mentors, too. Truett Cathy, founder of Chick-fil-A, and Ray Croc, the founder of McDonald’s, are surprising inspirations that you won’t find in his book.

McCrary likes Cathy because the chicken sandwich king gave himself and his employees a day of rest each week.

And he likes Croc because the hamburger icon knew what the job of a restaurant owner was.

“He built the whole chain but never cooked a hamburger or anything,” McCrary says. “His philosophy was you either got to work IN the business or you got to work ON the business.  But you can’t do both.”

These days, McCrary works ON the business while his kitchen leader, Marion Woodberry, pulls the early and late hours. McCrary actually came to Savannah to retire!

So, forget about getting him back on the competition circuit. It’s too much work.

“Staying up all night long, watching the meat,” McCrary says. “Wow!  It makes me tired to even think about it now.”

And forget about him opening a second location, too. His small restaurant, tucked into a shopping center on Wilmington Island, keeps him busy enough.

“We just finished our sixth year here in September,” McCrary says.  “I look back and I say, ‘Why did I do that?’ But then again I say, ‘Did I really do that?  Did I really accomplish that?’”

Yes, you did. And now others can use your secrets to reach for the heights as well.