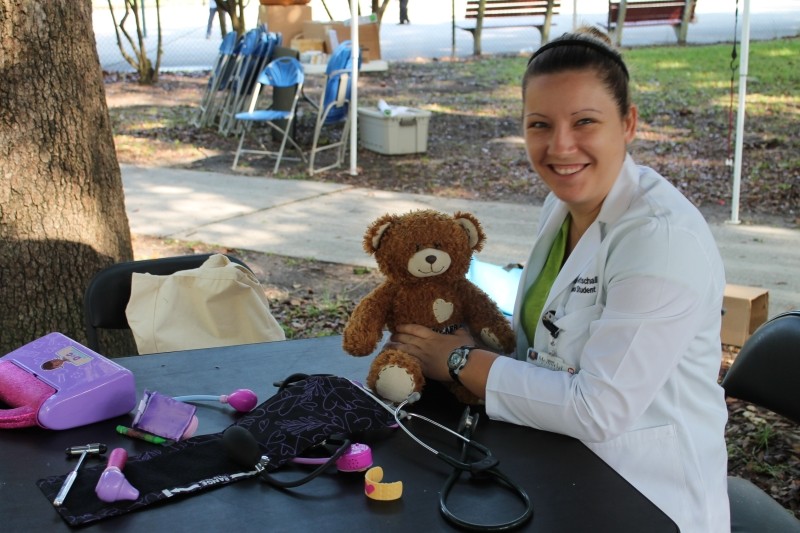 According to her doctor, second year medical student Elizabeth O’Connor, Inzozi needs a visit to the emergency room, where she’ll receive an X-ray and a cast.

The next patient is a floppy-eared dog with an eye infection, followed by a fluffy white bear with the chicken pox.

It’s all in a morning’s work for O’Connor and some of her Mercer University School of Medicine classmates, who will diagnose all manner of stuffed animal ailments at a free Teddy Bear Clinic, part of Forsyth Farmers Market’s Family Fun Day this Saturday, Nov. 15.

Kids can bring their own plush friends for diagnosis while participating in a scavenger hunt and other activities designed to stimulate curiosity about the medical profession and general health conditions.

“It’s a chance for kids to play doctor and learn a little about the diagnostic process,” says O’Connor, who plans to specialize in pediatrics. “They even get to try on our white coats if they want.”

The Teddy Bear Clinic is also a clever way to sneak in education about healthy eating and getting enough exercise as kids fill out “prescriptions” for a half a plate of veggies at dinnertime and limiting daily screen use.

Made possible by a grant from Healthy Savannah, the twice-a-year clinic debuted last summer in conjunction with the medical school’s monthly community health screenings at the market. Free blood pressure checks, body mass index measurements (BMI) and glucose tests are available for all ages.

“Savannah lends itself to health disparities, unfortunately,” points out Jennifer Boryk, Mercer’s Faculty Affairs specialist, referring to the epidemic levels of heart disease and diabetes among the city’s poor.

“Partnering with the farmers market has been great because it’s not a clinical environment. People are relaxed and maybe more open to making changes.”

Forsyth Farmers Market executive director Teri Schell concurs, offering the idea that providing basic health screenings in the park “democratizes medicine” for people who would not attend them at an office or commercial setting. It also supports FFM’s effort to educate the city’ on the connection between food and health.

“When you have the farmers there with the food, and the health professional explaining why it’s actually good for you, that holds weight,” says Schell, adding that assistance with enrolling in Wholesome Wave’s double-dollar SNAP benefits will also be available on Saturday.

Community medicine is built into Mercer’s curriculum as well as its mission, with an emphasis on teaching its students the importance of providing care to underserved areas of Georgia. Based in Macon, Mercer University opened a sister medical school at Savannah’s Memorial Health campus in 2008 and matriculated its first class in 2012. A massive facilities expansion is currently underway, and the student body is expected to jump from 40 per class to 60 by 2016.

Despite of the 120-hour a week workload for Mercer students, there is no shortage of volunteers for the Teddy Bear Clinic.

“It’s just so much fun to see the kids wearing our white coats, holding up a stethoscope to a stuffed animal,” Megan Papierniak, a fourth-year obstetrics student who has finished her coursework and now helps deliver babies at the hospital next door.

“It also gets them curious about going to the doctor, and maybe it helps them be less reticent when and if they have to go.”

The non-clinical setting also benefits the medical students, who practice their bedside manner.

“We get to have patient contact, which you can never have enough of,” explains Andres Montes, in his second year at Mercer with plans to pursue trauma surgery.

“It’s a chance to apply what we’ve learned in a more casual environment,” agrees Haresh Sooma, a third year ER student who will volunteer alongside Montes at Saturday’s adult clinic while their counterparts tend to the toys.

“It’s a great opportunity to interact with the community.”

The med students note that they aren’t able counsel on medication (even for the teddy bears) but can give referrals to the Curtis Cooper Clinic and other facilities. However, many of them feel that the preventative care and nutritional education available at the clinic can help turn the tide of American healthcare crisis.

“This brings it to a grass roots level.”