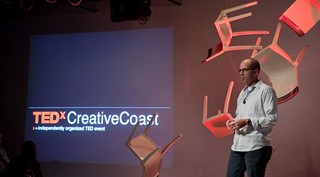 One part symposium, one part lecture series, add some notable community members and a lot of ideas; stir them up and let them marinade all day – that’s the recipe for this week’s TEDxCreativeCoast event being held at the Jepson Center.

While the location changes this year to allow for greater audience capacity, one thing that won’t change is the intellectually stimulating array of guests, who will each make short presentations about a spectrum of topics that fit loosely under the umbrella theme of “Inspiring Innovation.”

Presentations will breach subjects ranging from the virtues of laziness to the effect prescription drug marketing has on medical care.

While presenters aren’t paid, the event provides a unique opportunity for those who take the stage – a venue, an audience and an opportunity to further explore a subject of their choosing.

“It gives you a chance to think deeply about something you care about,” says Tom Kohler, the Executive Director of Savannah–Chatham Citizen Advocacy, who will be presenting during TEDx.

Although Kohler is best known as a community activist, his talk at TEDx will focus on the tradition of hand–painted signs in Savannah.

“My first real fascination was with a garage on the corner of Jefferson and Henry Street,” explains Kohler, describing the wall in detail, which included a woman in a bathtub drinking champagne, a boiled crab, a man playing pinball, and a couple at a table. “I had driven by this over and over and always thought it was so cool, and then one day I drove past it and it was gone.”

The disappearance of that mural inspired him to begin documenting signage all over the city with the help of photographer friends.

Also taking the stage during TEDx is notable architect/urban designer Christian Sottile, who will discuss the relationship between inspiration and the built environment.

“As a society we tend to think that architecture or urban design is some kind of specialty,” he says. “The fact is that the built environment affects every single one of us, regardless of what we do. Our buildings and our cities define who we are.”

Part of his message will be that though cities are often viewed as just the sum of their infrastructure, they should be viewed as a lens through which one can interpret humanity.

“When you read the city as not an infrastructure but as a representation of humanity, then ideas across the board are relevant,” he explains.

Sottile and Kohler are just two of 17 speakers that include photographer Imke Lass, novelist and Moth founder George Green, co–founder of Fuse843 Ian Leslie, and other entrepreneurs, academics, thinkers and tinkerers.

New for this year is also the addition of music to the lineup. In conjunction with the Savannah Stopover team, TEDx will present the critically acclaimed Louisiana band Givers at the Jepson Center on a bill with Little Tybee and General Oglethorpe and the Panhandlers.