THE Owens-Thomas House and Slave Quarters is one of the most historic homes in Savannah, but much of its history has gone untold.

As part of Telfair Museums’ Slavery and Freedom in Savannah project, the home reveals its new interpretive exhibitions on Nov. 17.

“The project started in the 1990s, when [Telfair Museums] started to conserve and restore this building,” says Shannon Browning-Mullis, Curator of History and Decorative Arts. “They realized they had the only really intact urban slave quarters in the city. That asks the question: How do we tell this story responsibly?” 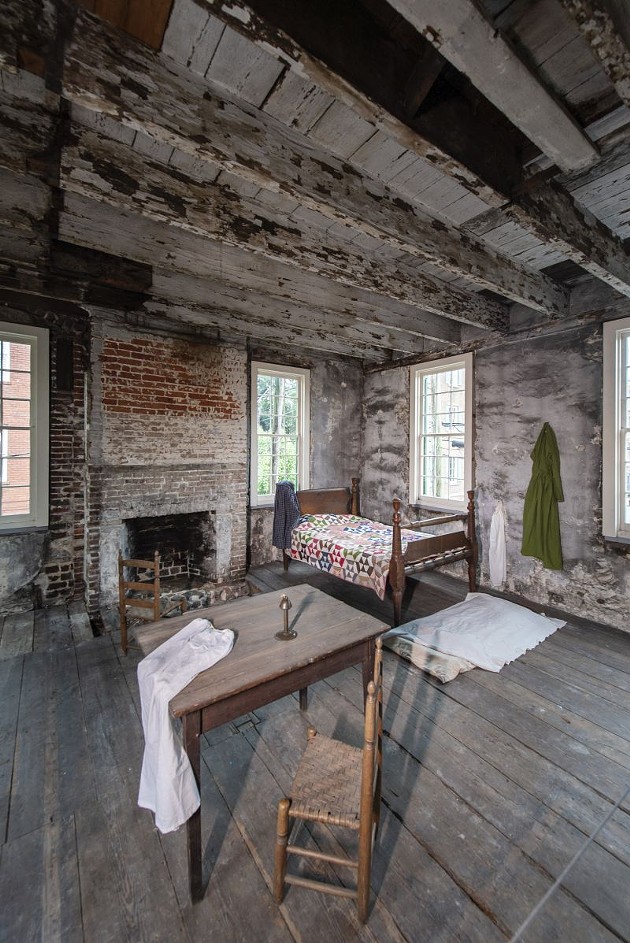 The upstairs bedroom in the slave quarters.

The 2011 Slavery and Freedom in Savannah symposium invited scholars nationwide to investigate that question.

The Owens-Thomas House’s story begins in 1816, when Richard Richardson obtained the Anson Ward lot and commissioned William Jay to design the home.

The Owens-Thomas House itself is an opulent display of material wealth in the mid-19th century.

As tour guide Lacey Wilson put it, the home was William Jay’s “resume house,” as it was his first design job.

George Owens, mayor of Savannah, moved into the house in 1834, bringing his wife Sarah, his six children, and his 11 enslaved servants.

“One thing we want to emphasize is that even though eight to 14 enslaved people were here at any given time, the wealth that generated this lifestyle came from the people that Richard Richardson was shipping out of the port of Savannah and the 400 people enslaved on George Owens’ plantation,” explains Browning-Mullis.

The beginning point of the tour pays homage to those enslaved people with a wall of names. 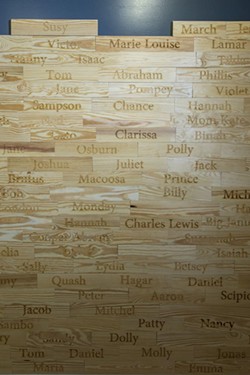 Photo by Geoff L. Johnson
The wall of names of verified enslaved persons who worked in the Owens-Thomas House over the years.

“We have many of the names of about 200 people who were shipped from the port and on the plantation,” says Browning-Mullis. “The blank boards reference the people whose names we didn’t recover. It’s a pretty overwhelming experience.”

The house stayed in the family until the death of Margaret Wallace Owens Thomas. She bequeathed the home to the Telfair Academy, and the slave quarters were in the process of being renovated into office space for Telfair staff when the construction team realized what exactly they were working with.

The slave quarters are notable because they feature the largest swath of haint blue paint in North America.

Haint blue paint was made and applied by enslaved people and consists of indigo, lime, and buttermilk. The blue color refers to the belief that evil spirits could not cross bodies of water, so the enslaved people protected themselves by painting ceilings and doorways haint blue.

“That’s now the conversation we’re having,” explains Browning-Mullis. “We have to share it, so how do we share it and protect it? It’s a constant thing with a historic building. The more you share it, the more it degrades.” 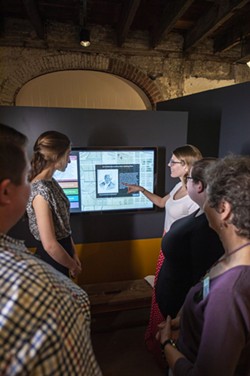 Photo by Geoff L. Johnson
A new touchscreen kiosk explains the history of the house and everyone who lived and worked in it.

Upstairs in the slave quarters, the museum staff recreated vignettes of the living conditions.

“We don’t have an inventory of how this was furnished,” says Browning-Mullis, “but we know they sometimes inherited hand-me-down furniture from the big house, sometimes they made or purchased their own furniture, and sometimes they didn’t really have a whole lot.”

Information on the living situations was pulled from narratives from the WPA, or Work Progress Administration, carried out under the New Deal. Journalists interviewed formerly enslaved people about their experiences.

“There are weaknesses to it,” Browning-Mullis acknowledges.

“These people were elderly and had been enslaved when they were children, and they’re being asked questions about slavery in the Jim Crow South. How open does one feel they could be?” she asks.

“But it’s the best we have. You recognize that some things people may not be totally comfortable answering honestly, but what kind of bed did you have? People will probably say what kind of bed they had.”

It’s reliance on primary documents like these interviews that informs the renovations. Across the courtyard from the slave quarters is the Owens-Thomas House itself, and the basement of the house is where the bulk of the education about the enslaved people happens.

“This space is a working cellar, so it’s where everything that made the lifestyle possible upstairs happen,” explains Browning-Mullis. “Food was cooked, laundry was done.”

It’s clear, touring the space, how hard the staff has worked to make the information interactive and easily understandable. In the kitchen, there’s a touch table that allows visitors to touch the materials that make up the walls and a discovery table with building fragments inside. In the scullery, there’s a digital projection of a slave doing laundry, reenacted by a Savannah Arts Academy student.

“One thing that’s tough is that people are here as part of a trip,” says Browning-Mullis. “They’re not here for their graduate degree; they’re not going to stay with us for days. We have an hour. Can we explain the history of everything in an hour? Yes, we can!” 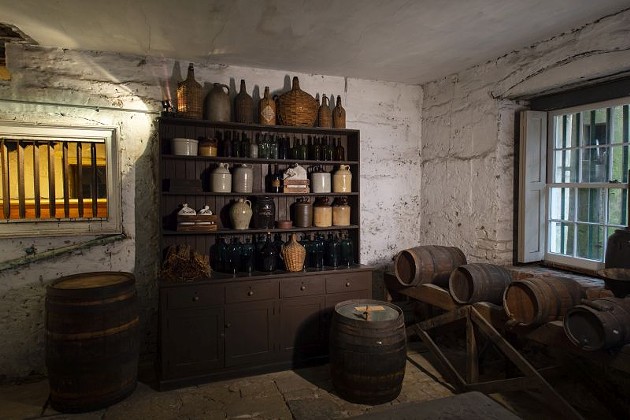 The discovery cabinet in the cellar shows visitors what was stored in the cabinets and what Diane, the enslaved cook, could access.

“They’ll have info here about what Diane had access to,” says Browning-Mullis. “If Diane needed something else, she had to ask Sarah Owens. It gives you a sense of what people had access to and what they did not have access to. You think [from a slave’s perspective] about when you did or did not control over how much food to feed your own children, or what medicine your own children would have been able to get. They had to dictate that to you.”

Previous visitors to the basement will see other new looks; the heating and air ducts which once dominated the ceiling of the space have now been painstakingly rerouted through the building’s chimneys.

One room in the basement stands out for its wealth of knowledge about the enslaved people.

Census records, personal letters, and excerpts from George Owens’ will illustrate the nuance of the relationship between families and the slaves they owned.

“Emma raised multiple generations of Owens children. Both George Owens and his son left her money in their wills. George Owens took her to Philadelphia for medical treatment once, which is insane,” she says.

“I completely believe that if you asked George Owens, he would say Emma was like family. But we also have a record where he sent her to jail for safekeeping overnight and paid $1.50 for that service. I assure you he would not have sent his daughter to jail.”

The complexity of the slave-owner relationship is extensively detailed both in the informational material and in the tour of the Owens-Thomas House itself. It is a relationship we cannot simplify or overlook, even today.

On the heels of the 2008 symposium, a follow-up is already in planning to keep the story going.

“People were enslaved here, and then the Civil War happened. Then you had African servants, no longer slaves, who were still here and still working and still experiencing life in Savannah and their descendants live here today,” says Browning-Mullis.

“It’s not a story that has an end. One of the questions we’ve asked all along is: What is the legacy of the story we’re telling on this site? The original symposium ended with Reconstruction,” she says.

“We’re convening a symposium in 2020 that will look at the legacy of slavery in Savannah, picking up with Reconstruction and going through today.”

That symposium will address everything from the Jim Crow South to the civil rights movement to today. 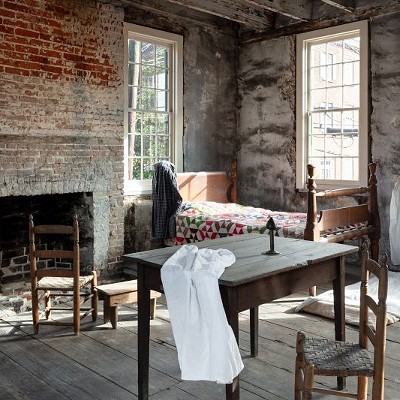