Limited gallery hours will be posted on the festival's website, savannahstopover.com/10th-anniversary-photography-restrospective

IT'S SAFE to say that after ten years, Savannah Stopover Music Festival is a local institution.

Over its decade of programming, the festival has brought performers like Grimes and Mac DeMarco before they made it big, as well as of Montreal and Deerhunter after they were household names.

A dedicated team of photographers, both local and national, were there the whole way, front row at every show, capturing the shots that have come to define the festival.

On Feb. 27, Stopover will present a tenth anniversary retrospective exhibition to run in conjunction with this year’s festival. The exhibition will be on display at 411 West Charlton, in the West Broad complex, through March 7 with limited gallery hours. Sulfur Art Services partnered with the festival team to help make the retrospective happen. 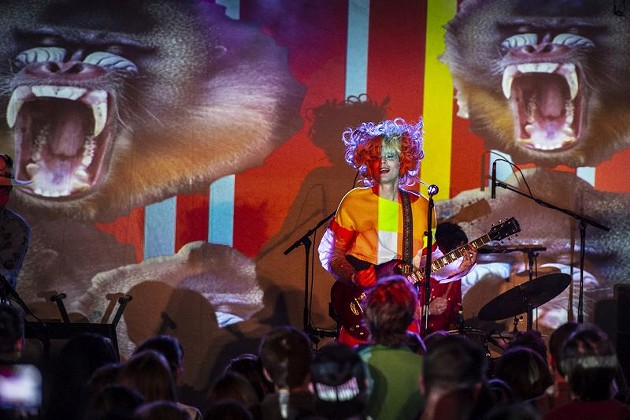 of Montreal by Geoff L. Johnson

When planning this year’s festival, founder Kayne Lanahan originally wanted to have a poster exhibition.

“But this summer as we were looking through old photographs, it struck me how many wonderful images there were, and how hard these photographers have worked over the years to capture the festival,” explains Lanahan. “We started contacting the photographers, and their excitement helped the idea grow.”

“When we think about the past nine years of Stopover, we always think about that quintessential moment that defined the set,” adds Caila Brown, Stopover’s creative services manager, “whether it was Grimes on the stairs at the Jepson Center, human bowling with Peelander Z at the Jinx, or Pinc Louds performing at the Peregrin rooftop. Our photographers have captured those moments perfectly, and we wanted the opportunity to share our—and their—favorite Stopover memories with the world.”

The 46 images for the show were selected by a jury that was comprised of Brown, Emily Earl and AJ Perez of Sulfur Studios, and artist Marcus Kenney.

“We were looking for images that gave the feeling of Stopover,” says Earl, “images that would be fun for people to see who have attended the festival before.”

The photographs in the retrospective are sure to remind attendees of their favorite sets of the past.

“The exhibition will be a nice walk down memory lane for those that have attended lots of shows in the past,” says Earl. “We also wanted to showcase some of the musicians that played Stopover and then went on to become quite well known.”

“It was great to see the photographers’ favorite and most celebrated Stopover moments,” adds Brown. “Some matched up with my preconceived thoughts, and some were completely new. Our first pass-through of the images, we stopped at every shot that made us pause or exclaim, and we quickly realized that we were going to need to be more subjective or we were going to take every single one.”

The photographs themselves are all fantastic shots on their own, covering a wide range of approaches to shooting the festival.

“The exhibition features a nice variety of photographic approach—wide crowd shots and full band shots, as well as more close-up portrait-style work,” says Earl. “The exhibition also has a nice balance of black and white and color work.”

The ten year anniversary is a big moment for founder Lanahan, as well as everyone who’s been involved with it over the years.

“I think it’s a testament to all of the people who have helped the festival grow over the years,” says Lanahan. “We’ve really tried to keep it affordable and true to the original concept of discovering emerging artists.”

Above all, the retrospective is a way to get everyone excited for this year’s festivities.

“We wanted to do something to both commemorate and celebrate the milestone by giving our longtime Stopover fans a way to look back at the festival over the years,” says Lanahan, “and also to give people who are new to Savannah—or new to the festival—a window into what the festival is all about.”