The renowned artist and musical visionary comes to town

THAT 1 GUY has been in a constant state of artistic exploration for as long as he's been around. The renowned bassist and creator, who's known for the use of his homemade instrument called The Magic Pipe, has received critical acclaim and played with a number of legendary artists including Buckethead and Tom Waits.

The musician, whose given name is Mike Silverman, is fittingly performing as part of the upcoming PULSE Art + Technology Festival at the Jepson Center for the Arts on Sat., Jan. 26, and it's another stop in a seemingly endless string of shows for Silverman. He's devoted his life to music and creation, something that started for him at a young age.

"I'm an upright bass player - bass is really my thing. My dad plays and was a professional jazz bass player when I was a kid, so I was super lucky to grow up with a big upright bass in the house. It was a lucky break to have that thing around and have access to it," he tells Connect.

Silverman started playing professionally at the age of 16, but his musical interests started to form as he got older. He started listening to bands like Rush but also immersed himself in 80s hardcore punk like Blag Flag, before discovering jazz fusion and funk. His interest in more experimental music like Frank Zappa and Captain Beefheart, who are both major stylistic influences, happened when he started writing songs.

Silverman cites Beefheart as an important turning point for him in terms of the kind of music he composed and recorded.

"I remember thinking, 'Wow, I write music just like this,'" he explains. "And when I built the [Magic Pipe], it was like, 'Man, that's an extension of what I'm trying to do already.'"

The Magic Pipe was something that Silverman felt was an "extension" of what he'd always done musically, and is similar in construction to an upright bass. He built the instrument using aluminum pipes wired with with triggers and samples - working away at it for several years before landing on something that he could use in a one-man-band capacity. It includes both rhythmic and melodic capabilities and essentially gives Silverman the ability to act as a bass player and drummer at the same time.

"I needed to push my music farther than I could on traditional musical instruments," he says.

"I was trying to create a very acoustic sound with the electronics, a very organic sound out of the triggers. Because I knew nothing about electronic music, I just sampled my upright bass. I put a mic next to it and sampled it, and then triggering that. I was banging on trashcans - all of the sounds I [make with the pipe] is just me banging on stuff. That was sort of the transition, and it's very much an extension of my upright bass." 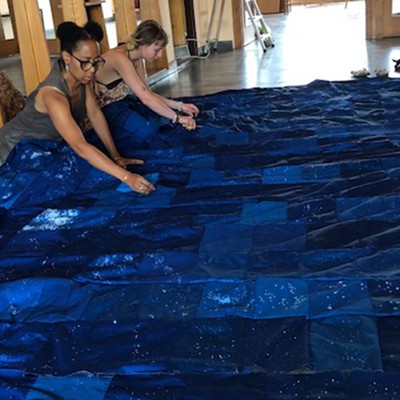