That dude that sings that song 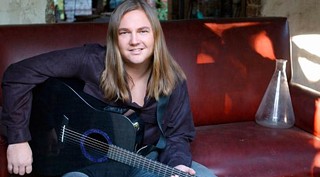 Edwin McCain scored his one and only big hit in 1998 with "I'll Be," an optimistic and heartfelt love ballad. It's one of the most-played songs at weddings all over the country.

The song's success was sweet for the South Carolina-born McCain, whose career was, at that point, veering dangerously close to the skids.

He'd exploded out of the Charleston club scene, signed to a major record label (Atlantic) following the meteoric rise of his friends in Hootie & the Blowfish. For a time, he'd been hailed as the Next Big Thing.

Just two years after "I'll Be," he was off the label, and before you could say "Whatever happened to Edwin McCain?" he was once again an independent artist, still writing great songs, still touring and still thrilling an enormous and devoted base of fans.

These days, the 42-year-old McCain is a contented father of three who loves his wife, drives his kids to school every day and thanks God for getting him off booze, and ego, and far away from the hard-living rock ‘n' roll lifestyle.

"I don't think I can ever look back and say I didn't take the whole ride," McCain says philosophically. "I don't wish for those days at all. It was exactly what we were going to do when we were in our 20s - I had a good time - all of that was part of growing up. Part of becoming who I am now.

"I don't look back on it with any regret, but I certainly wouldn't go back."

He performs two weekends out of every month, more or less, and his 10th album, the well-received Mercy Bound, came out last August on 429 Records.

McCain learned a valuable lesson during his time in the majors.

"Part of the learning process was finding out that more is just more, bigger is just bigger," he explains, "and it's not necessarily more powerful or more valid, as far as visibility and record sales and all those things go.

"The faster it came, the faster it went away. Just in the years we were with Atlantic, I saw hundreds of artists come and go. To me, it started seeming like the quickest way to never be heard from again.

"My intention from the very beginning was to see how long I could do this. It wasn't ever about getting in, making a bunch of loot and getting out. But there were many people whose goals were exactly that. If that's what your goal was, the big label was the place for you."

Atlantic, McCain says, pulled its support of anyone and anything from Charleston following what he terms the "Hootie Backlash": The band was perhaps the biggest success story of the 1990s with its multi-platinum Cracked Rear View album, but starting with its followup, they couldn't get arrested.

"It resonated through the record company once there was a concerted effort to lower the exposure of Hootie & the Blowfish," he explains. "The term ‘overexposed' was being hefted around quite regularly.

"What that meant to us, professionally, was anything that was associated with that was gonna get the turn-down, too. Even in interviews - the universal Atlantic mindframe was dial it down, and that included me and anybody else that was associated. I never did an interview where Hootie & the Blowfish didn't come up. I had to do something to differentiate myself quickly. And as a guy whose first video included Darius Rucker, it was kind of hard to do that.

"It was panic mode for us, because we hadn't sold enough records to be tenured, by any stretch of the imagination. We were on the chopping block for sure. That was it.

But that Top Ten hit wasn't enough to sustain him, and after a few more tries, the label let the air out of Edwin McCain's balloon.

He's justifiably proud of that song, however. "We overthink our position in the world," McCain says. "The truth of the matter is, I'm the guy that sang that song. When people are going out some night, in whatever town they're in, it's like ‘What's going on tonight?' ‘That dude that sings that song, he's playin' over there!' And so 12 people will come to a venue and go ‘Let's go hear that dude that sings that song.' And now I got an hour and a half to play ‘em all this other stuff, and hopefully entertain ‘em enough to the point where they'll come back next year when I come through.

"You know, if you've got that in your catalogue, you've got a life. It almost instantly familiarizes people with the idea that they can come out and enjoy what you're doing."

The arrival of his children gave him the opportunity to re-prioritize things. The first thing he did was cut off the long golden hair that had girls everywhere swooning over the "I'll Be" video. He did it, he likes to joke onstage, after his toddler son looked up at him and said "Mommy?"

Fatherhood, he says, is "the most challenging and rewarding thing I've ever done. The hardest job that you love completely. It puts things into perspective.

"I've been a hundred times more irresponsible towards my career as a father than I ever was as a raging alcoholic. I've prioritized my children above my career - and I never prioritized anything above music before. All I did was work furiously towards this goal in music. And I was putting in my 10,000 hours to try to get somewhere."

So he writes when the spirit moves him - and it moves in mysterious ways. "I'm not a fiction writer," McCain says. "I try to mine the poetry out of what IS in my life, the things that are important to me and are hitting me in a certain way. It's just kinda one of those things. I'm happy to say that I'm still inspired, and still trying to perfect what I'm doing as far as writing goes.

"I don't really force it either. I'm not one of those get up every day and write for four hours kind of people."

Achieving a philosophical perspective might have come at a price, but McCain says he's happier now than he's ever been.

"I have a sense of completion. I feel like I've done everything I can possibly do in the music business. I don't have any delusions that I'm ever gonna have a million-seller again, or have some chart-topping song, or be relevant to ‘the kids.'

"I know where my station is now. I play to the listening rooms, and we have an amazing audience that comes to hear us. They're appreciative, and I'm grateful for the opportunity to play in those environments.

"I wouldn't change a single thing. I'm lucky because I got to learn that for myself."

With Wormsleow, Keith and Ross, Jason and Jared