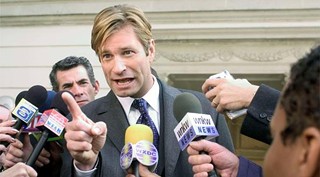 As Harvey Dent in Christopher Nolan's "The Dark Knight" (2008)

With a filmography that includes box office hits (The Dark Knight, Erin Brockovich, The Black Dahlia) and critically acclaimed indies (Thank You For Smoking, Towelhead, In the Company of Men), Aaron Eckhart can pick and choose his projects.

He admits he doesn't always get it right - the big-budget romantic comedies No Reservations and Love Happens, opposite Catherine Zeta Jones and Jennifer Aniston, respectively, were serious flops. Even Rabbit Hole, based on an acclaimed dramatic play and pairing Eckhart with Nicole Kidman, did disappointing business.

But that's OK with Eckhart, who usually got the best reviews in those films, anyway. He understands the mechanics of the movie business.

Although mainstream audiences probably got their first glimpse of his rugged good looks in Christopher Nolan's Batman film The Dark Knight (he played Gotham district attorney Harvey Dent), Eckhart has been in the celluloid game since the early ‘90s.

Next up, he's co-producing The Drummer, in which he'll play the Beach Boys' Dennis Wilson. Eckhart is taking drum, piano and singing lessons to ease into the role.

Because hey, that's what a good actor does.

Considering all the work you've done with playwright Neil LaBute, and the fact that you're in The Rum Diary, from Hunter S. Thompson - how important is really good writing to you?

Aaron Eckhart: Well, good words are better than bad words. You put two words together, three and four and five words, and somehow they make magical sense. It means more for the five senses - not only do you hear them, but you feel them and you taste them and you smell them and all that sort of stuff. In other words, words just aren't random when great people put them together, like Neil, or David Mamet, or, you know, Shakespeare - they have an electricity inside them, and when you put two words together to create an image, it's powerful.

So you can tell, as an actor, good writing. And it really just clips, and it means something. And there's electricity on your tongue, in your body, when you say it. I intentionally simplify this, in terms of good words and bad words, but bad words are just tough to say. You lose energy when you say them, and that translates onto the film.

But you're not always going to get a great script, right, especially with the big studio films? What do you do then?

Aaron Eckhart: It's tough. There's the whole "We'll fix it on the day" or "We'll come up with something on the day," which is never as strong. It's hard to compensate for bad writing. Or bad plot. Or ill-conceived ... you have to live with the consequences. The problem is that good words aren't always rewarded in terms of box office. And I'm not saying they should be, but I think there's less of a demand for that sort of thing today. Certainly in the studios.

So, follow the money. You gotta go where the money is. And if you want a chance to play the game again, you've got to make some money for somebody.

So is the idea that you make the big-money studio pictures in order to allow yourself the wiggle room to do the tastier independent stuff?

Aaron Eckhart: Always, especially because movies are driven by international numbers now. They've overtaken domestic box office now, so you have to make movies no longer for just America but the whole world. You have to balance what you want to do versus what the world wants to see. And make it work with the numbers somehow.

Because people are taking a big risk with money. A lot of the times, I'll do a movie and people have put money into it, and I'll just say "Well, you guys have to expect to lose that money. Nobody's gonna see this movie."

Rabbit Hole was made for a pittance, and it didn't even make its money back. And you had Nicole Kidman in it, and it's a Pulitzer Prize winning play.

When you do something like that, you recoil and then go "I've got to go protect myself," so you go under the studio's tentpole. You run for cover.

No Reservations was a big money studio film, heavily promoted, and it tanked. Do you get to a point during production when you know it isn't going to fly? Or o you have great hopes for it until you see what it does at the box office?

So I don't know if that's the euphoria that you feel, but it's genuine. You always feel like you're doing good work. I mean, not always, unless you're just working on shit.

Because there's electricity on set. Especially when you look at dailies. That's why I don't really see movies that much. I'd rather just stick to my own experience on the film. I don't particularly like to see it.

Regarding The Dark Knight. After Heath Ledger's tragic death, that became the story, not the movie. Did that take away anything for you?

Aaron Eckhart: Not for me, never once. I mean, just because Heath's no longer with us I'm not trying to pump him up: The guy was a genius in the movie. That's one time that we all ... you're talking about Gary Oldman, one of the best actors ever. And Gary's sitting there looking at Heath in awe. Or Chris, or me, or whoever. He was rockin' that part.

I remember when we were in rehearsals, and I rehearsed with Heath. And I said to Chris afterwards "This guy is killing it. This is insane." He changed the whole tone of the picture. I mean, he was responsible for that movie, as far as I'm concerned.

The thing that I regret is A, Heath's not here to do more, and B, that he wasn't there to promote the film and talk about his performance and his process. He was dialed in on that. It was a pleasure to work with him and watch him. So I don't think anybody's throwing him a bone, and I don't think the movie's success was based on his death.

As an actor, what do you think your strong suits are?

Aaron Eckhart: Well, I think people like to see me playing characters that are moving forward, that are pro-active. That don't look behind them or beside them. Who are focused primarily on chewing up the scenery in front of them. I think when I get reflective or passive as a character, I get in more trouble.