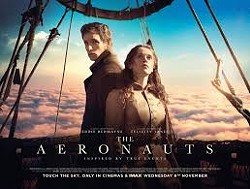 ANYONE who thinks a film about old-timey hot air ballooning would be boring will think again after seeing Tom Harper's thrilling "The Aeronauts," which screened Saturday night at the SCAD Savannah Film Festival.

Loosely based on historical events Harper compiled from the Richard Holmes' book "Falling Upwards," this gripping tale is the story of the hyperfocused scientist James Glaisher (Eddie Redmayne) — a meteorologist before that word was even a thing — and his outgoing, determined balloon pilot Amelia Rennes (Felicity Jones).

It's London in 1862. While America is embroiled in civil war, the English and French are in mild competition to see who can climb highest in a hot air balloon.

Glaisher just wants to read his instruments and fulfill his prophecy that one day people might actually be able to — wait for it — predict the weather.

Rennes is trying to overcome lingering feelings of guilt over the fate of her French balloonist husband.

They come together to try and break the record, and go seven miles high in a hot air balloon far above the clouds — higher than you usually go in a passenger jet today.

Sound dumb? It's not. Tom Harper, director of the first season of Peaky Blinders, brings the same combination of gritty realism and period correctness he brought to that popular series, also set in Britain.

The movie partially relies on the device of setting the narrative in real-time, documenting the (largely embellished) record-setting flight of Glaisher and Rennes more or less as it happens, with room for flashbacks.

As Harper said at the Q&A, while coming up with the story "I was fascinated with how these balloon flights all tended to be about ninety minutes long — which is also the perfect length for a movie."

Not to give away too much, but there are some wild and expertly filmed action sequences when their flight runs into trouble with weather and the effects of sub-freezing temperatures at high altitude.

Moviegoers sometimes frustrated with Redmayne's habit of whispering and slurring his words will be happier with his clearer enuncation in this film. Felicity Jones is a marvel in the role of the seemingly reckless, but actually remarkably competent pilot.

The filmmakers had an actual, working hot air balloon specially constructed for the movie. It was period-correct except for one thing: It used helium. Back in the day, hydrogen was used, which is quite flammable, as you might remember from the famous film of The Hindenberg exploding.

The sequences in the sky are truly stunning, rife with cloudscapes and panoramic views, and very little reliance on CGI.

Harper explained that while green-screen was liberally used, "the vast majority of the time, the backgrounds are real. We went around the world looking for the best clouds. We went to New Orleans, we went to South Africa, we went all around the UK."

Redmayne and Jones spent a good deal of time in the sky for some sequences, to fully achieve the effect of this kind of daring, open-air flight with no oxygen masks.

"Spare some care for the poor actors who had to go up there," joked Harper.