The Army of Awesomeness answered the call 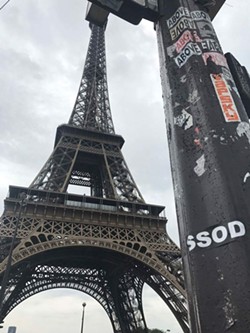 IT ALL started over a couple of beers between a buddy and me. He had taken it upon himself to order a box of SSOD bumper stickers.

Our initial intent was to simply annoy City Council members (one in particular) by placing these stickers all over town, inconspicuously dropping stacks off at random bars, restaurants, etc., in hopes that these clowns would spot them as they went through their day of doing... whatever it is they do.

Well, a few more beers into it and our conversation turned towards doing something more beneficial for the community. So I took to my Facebook page, and asked the thousands of followers for recommendations and advice on some worthy causes.

And man, oh man did they come pouring in! It was almost overwhelming, because there were so many amazing organizations to choose from.

However, I researched every one of them and decided on the one that I liked best, which was the Coastal Children’s Advocacy Center.

Let me tell you a little about them:

“CCAC offers a confidential, child-friendly site for video recording forensic interviews with children who have been sexually or severely abused or have witnessed violence. Recording interviews prevents children from having to talk about their abuse repeatedly, reducing the trauma of disclosure, and preserves the child’s initial statement for criminal justice purposes”, says Rose M. Grant-Robinson, Executive Director of Savannah’s CCAC.

How awesome is that???

They also provide continued counseling for the children and non-offending family members, as well as crisis intervention and court assistance. All services are free.

Nobody at the CCAC is getting financially rich, you understand?? Do you???

So, with my decision made, I headed on over to Pinkie Masters with a stack of stickers in hand, and asked if I could make donations available there, which they happily agreed. As soon as Anthony over at The Collins Quarter heard about it, he graciously offered to help.

Shortly after that, Chris over at Barrelhouse South/Rogue Water contacted me to offer assistance as well. From there, The SSOD Army of Awesomeness donation drive for CCAC was on.

The response far exceeded my expectations. One of my favorites was how people started sending me pictures of the SSOD stickers as they took them on travels, not only all over the country, but all over the world: Ireland, Scotland, England, France, Italy, Mongolia, South Korea, Costa Rica, just to name a few.

My personal favorite was from someone that has ran in countless marathons, including 13 consecutive Boston Marathons. She sent me a photo of her sticker that she permanently placed... ON HER PROSTHETIC RUNNING LEG!!!

What an inspiring badass.

The Army of Awesomeness really jumped on board with support for this extraordinary organization as they help these brave children warrior through the horrors of what they have been victimized.

At last count, we have raised $4475, including extremely generous donations from The Collins Quarter, Barrelhouse South/Rogue Water, and DX Marketing.

And, of course, thanks also to everyone that has helped me take up this cause. Not only for raising money, but more importantly, for raising awareness of the atrocities these children have endured.

By the way, I STILL hope these stickers annoy the shit out of City Council.