ONE OF our city’s most famous sites gets a closer look in an exhibition up at the Jepson Center.

“Bonaventure: A Historic Cemetery in Art” was curated by Senior Curator of Education Harry DeLorme as an exploration of the cemetery’s influence on art.

“My take on this was not just a history show,” DeLorme explains. “I thought I’d look at the history of Bonaventure as represented in art.”

Bonaventure began as a plantation in the 1760s, run by John Mullryne and his son-in-law Josiah Tattnall, Jr. The plantation was sold in 1846, which is around the time it transitioned into a private burial ground. 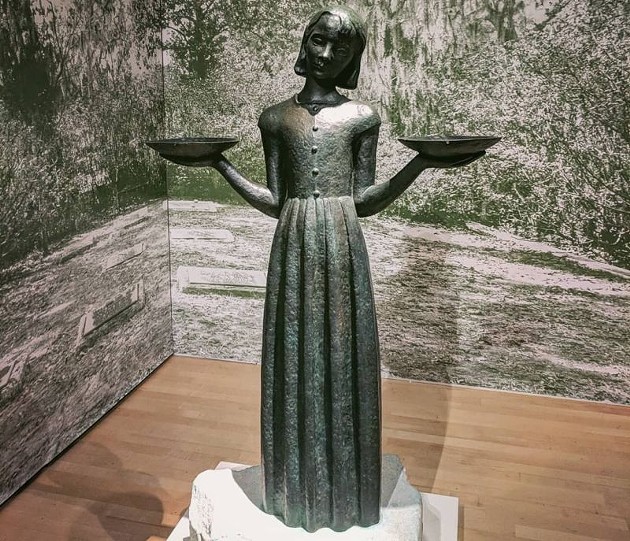 The first people on record to be buried in Bonaventure were from wealthy families.

“There’s this period in history, the time of the rural cemetery movement in America,” DeLorme explains. “Cemeteries are starting to be built outside of cities, since it’s more sanitary and more reflective of the landscape. During this time, Bonaventure’s name was changed to Evergreen initially and it stayed that way until the early 20th century.”

The city of Savannah purchased Bonaventure in 1907 and the adjacent Greenwich in 1937.

DeLorme traces the history of Greenwich, from a plantation owned by Samuel Bowen to a German rifle club after the Civil War to a sprawling mansion owned by Spencer P. Shotter, the president of American Naval Stores.

“He was immensely wealthy, so he commissioned this huge mansion and got a New York architecture firm to design it,” DeLorme explains. “He bought original works of art, including Roman antiquities.”

Included in the exhibition are two Roman sculptures of Janus, or double-sided, heads that served in ancient Rome as boundary markers.

After Shotter sold the property to a doctor from Detroit, a fire broke out on the property, burning the mansion and all the ancient art inside to the ground—excluding the Roman sculptures still on the cemetery grounds.

“When the property sold to the city of Savannah, the sculptures went to the city, and these have been on view at the Telfair since,” DeLorme explains.

Of course, Bonaventure’s rise to fame is largely thanks to Midnight in the Garden of Good and Evil.

“John Berendt recommended Jack Leigh to Random House to take the cover image for the book,” says DeLorme. “He only had two days to make the photo, so he got the keys and stayd out there past midnight to get the feel of the place. The next day, just as the light is fading, he came across the Bird Girl.”

Leigh and his studio assistant spent hours in the studio and manipulated the image by dodging and burning the photo in the darkroom. Leigh was so confident in the image that he sent only that image to Random House for cover consideration. (For more on Jack Leigh, see page 23.)

“The sculpture itself was created by Sylvia Shaw Judson, who made this as a garden sculpture,” says DeLorme. “It was done as a commission, not intended for something in a cemetery. When Jack ran across it, it seemed to sum up this idea of good and evil, like the scales of justice. It’s funny how the meaning of a sculpture can change over time.”

The exhibition will remain up through Sept. 23, leaving you plenty of time to dive into Bonaventure’s storied history.