The ballad of Val Halla 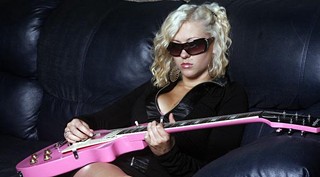 A guitar player is a guitar player, and whether he or she prefers to wail on electric or strum on acoustic, a certain amount of cross–pollination is always good for keeping things healthy.

Val McLeod grew up, music–crazy, in the chilly Canadian prairie town of Regina, Saskatchewan. She’s 26 now, so she cut her teeth playing Nirvana songs – on a nylon–stringed classical guitar – in the early 1990s.

By 17, she’d discovered that steel strings – for her beloved rock ‘n’ roll – were the way to go. It was then that she changed her name to Val Halla, moved to Vancouver and began to write songs, sometimes ballady and countryish, sometimes tough–nut blues and attitudinal rock. Whatever she felt like.

A self–imposed induction into “songwriting boot camp” in Nashville helped her fine–tune her craft, and led to the critically acclaimed No Place album and a 41–city American tour opening for Midwestern rock hero Ted Nugent.

No Place was so titled because Halla knows her music and lyrics don’t fit into any existing format. The album is equal parts Joan Jett, Sheryl Crow and Faith Hill, from the crunchy “The Bad Girl Touch” and “Whiskey Evening” to the flowing acoustic ballads “Black Butterflies” and “Coming Home.”

She plays the Live Wire Saturday as one–third of a power trio.

Are you a rocker, or an acoustic person, or have you found a comfortable place in the middle?

Val Halla: I grew up listening to people that did both, and did both really well. Most of my influences were classic rock and stuff, guys like Neil Young, even Led Zeppelin: Led Zeppelin III is way different than II and IV. But these people were able to do both, and show these folky or rootsy ballads, and also just go balls–out.

Nobody wants to let you do that now, because the marketing guys have sort of taken over the whole music industry.

The first two albums I ever did were acoustic albums. And then I did two rock ‘n’ roll albums. I hold them both pretty dear. And my whole quest is finding a way that I can do both of those things. Because it seems like a lot of people want to get in my way when I want to do that.

What do you want to happen for yourself? What are you looking toward?

Val Halla: The thing I hold as epic, as the “You’ve made it” kind of thing, I want to play a sold–out show at Wembley Stadium by the time I’m 30.

What was the Ted Nugent tour like? I first saw him in the ‘70s, when he was a screaming maniac.

Val Halla: Well, he’s still a screaming maniac! It was awesome. I feel so lucky that I even got to be a part of that, because a lot of acts, they don’t get that any more. Because there’s no development – they’re not trying to break younger acts so they’re not giving anyone a chance.

But I needed that so bad because he’s been doing it for years and years, and he knows how to put on a great live show. He’s got killer stage presence and he’s got everybody’s attention the entire time. The first show was in Boston, and by the time we played Detroit, his hometown, there were 15,000 people there. All the things that I learned over this past summer – just about putting on a good live show, and reaching to the back of the room. Developing as an act.

He’s a crazy guy, he’s an opinionated guy; he definitely speaks his mind. He either gets people riled up loving what he’s saying, or he pisses people off big time. He’s got lots to say.

Do you feel as if you have a barrier to cross? When people say “Hey, a hot blonde chick playing electric guitar,” do you have something to prove: “Wait, I’m a musician”?

Val Halla: I’m conscious of that, and I think I almost did it on purpose. I don’t naturally have blonde hair; I grew up kind of like this tomboy with long, brown hair. I never was the kind of person like “I want to be a pop princess, and use my looks to get what I want.”

I know that I put a lot of effort into actually doing music, playing guitar and songwriting. But I changed the way I look when I went to Nashville. I liked the juxtaposition of it – people do assume certain things about you when you look that way.

Especially like Ted’s crowd this summer – it’s all dudes, it’s all guys. I’d walk onstage and get the catcalls, people yelling things. And then we’d open up with this ripper song, and suddenly people were like “Oh. Well, crap. She actually plays that guitar.”

I kind of like playing on people’s preconceptions, and just obliterating them. It seems to have an effect.