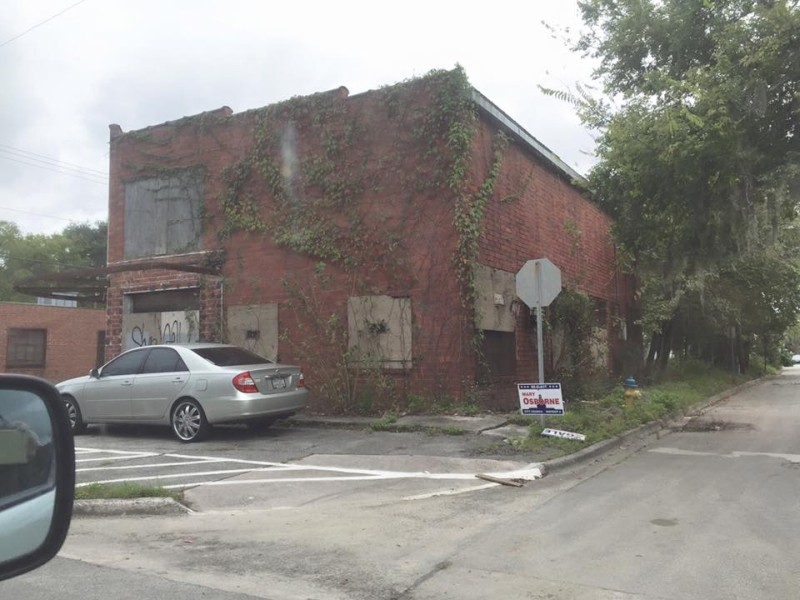 Many Savannah residents note the ironic symbolism of incumbents’ signs, such as this one encouraging you to vote for Mary Osborne, often being placed on or near derelict properties.

IN A whirlwind move done with surprising speed for anyone used to their usual glacially slow pace, City Council approved spending $3 million of your money to purchase the old fairgrounds site on Meding Street on the Westside.

The lightning-quick election year purchase comes at a time, incidentally, when the police force is still understaffed by about a fifth. The price of the fairgrounds is roughly twice the amount of the most recent, minimal and long overdue raise for local police.

The purchase joins a long list of previous local government land acquisition/development projects, almost none of which have seen much notable success:

* The cost-overrun plagued and still largely mythical Cultural Arts Center, which was relocated from a previously planned site which itself was purchased for a million dollars, now idle.

* The million dollar-plus purchase and razing of historic African American homes to make way for the new Central Police Precinct – which itself was originally set to go on a parcel the City purchased for a million dollars on Waters Avenue at top dollar that it still can’t figure out what to do with.

* The half-million dollar purchase and later $200K demolition of the old historic African American pharmacy on MLK—basically three quarters of a million dollars down the toilet.

* The desolate Savannah River Landing, which while not a City purchase per se, represents significant taxpayer exposure.

* The Westside Arena, set for Stiles Avenue, has $120 million in SPLOST money earmarked for it -- equivalent to a third of the entire annual City budget -- and no clear plan.

* The long-running debacle of the Savannah Riverwalk.

This is not even getting into the Ellis Square/Whitaker Garage mess, which seems to have been a magnet for legal problems, not to mention apparent graft, from its inception.

The City of Savannah, to put it simply, has an extremely dubious real estate track record—unless of course you owned the land the City bought, sometimes at prices higher than fair market value.

The fact that the fairgrounds purchase is being ramrodded through in an election year should cause us even more concern.

Supposedly the purchase will provide the site for another mixed-income planned community development on the model of Savannah Gardens—which depending on who you talk to is either an amazing example of government helping people, or a shoddily built and rapidly decaying magnet for crime.

That is, if the “environmental issues” at the fairgrounds can be sorted out within the 90-day due diligence window....

So tell me, do you think this City Manager and Council will perform their due diligence so as to avoid a debacle if the cost of environmental abatement might dramatically raise the actual price of the site?

But what I found most cluelessly bizarre was that the proposal for the fairgrounds site includes “Youth Baseball Fields”—in a time when inner city youth baseball in the U.S. is all but totally dead—and multi-use playing fields.

I don’t see the “private” part of the public/private partnership envisaged for the new development as likely having much to do with paying for those fields and for their upkeep, do you?

Meanwhile, as the City continues to get deeper into the real estate and landlord business—some would say slumlord is a more accurate term—blight continues unabated throughout the already-established neighborhoods of Savannah.

I keep hearing that Savannah doesn’t have enough low-income housing to meet demand.

But I drive through some neighborhoods where every other residence is boarded-up or otherwise vacant.

I suspect that 90 percent of occupied blighted properties are rented out, rather than owned by the people living in them.

There is clearly no shortage of housing stock in Savannah, affordable or not. But much of it is in an extremely blighted state.

And the City seemingly does little to nothing about the slums, nor about the slumlords. In some ways they seem to encourage them.

The usual excuse is that it’s difficult to do anything where private property is concerned. But I think it’s just easier—both in process and in politics—to make large real estate deals and dole out contracts for new construction, rather than address the extraordinary state of blight in already-established neighborhoods.

But it all makes sense when you realize that More Blight=More Money.

A community “stricken” with blight—note the false disease analogy, as if there is no known cause—is a community eligible for grant money to “fight” it.

Savannah has evolved a government one of whose prime functions is attracting and spending not-insignificant sums of cash from Community Development Block Grants and the like.

Savannah’s blighted neighborhoods have received these funds, at least in theory, for generations, literally as long as I’ve been alive. People have grown up in neighborhoods generating these grants, had kids. Their kids have had kids.

Yet the blight never seems to decrease. Does it? And the money keeps rolling in. Doesn’t it?

Where does the money go? Because it damn sure isn’t eradicating any blight.

And so we’re reduced, again, to just hoping for the best, despite a track record to the contrary.