Will this be the best-ever Picnic in the Park?

Did someone say ‘1812 Overture’ with real cannons?

Picnic in the Park

ONE OF Savannah’s most beloved annual events, Picnic in the Park, always offers great music and fellowship.

This year, however, might be the best one ever. Why? Five words: “1812 Overture” with actual cannons.

Tchaikovsky’s immortal piece —commemorating a Russian victory over Napoleon in the Battle of Borodino— famously calls for artillery to sound off in conjunction with the bombastic finale, in which the composer liberally sprinkles passages from “God Save the Tsar.”

“The score calls for very exact timing of the cannon. In the old days of course they literally had to light a fuse and hope it burned all the way down at the right time,” laughs Shannon.

These days, it’s easier to fire a cannon, but no less impactful in person.

This year’s Picnic theme, “Under the Stars and Stripes,” was chosen through a Facebook contest in which users were encouraged to submit patriotic ideas. The winner, Wallace Blackstock, wins six tickets to the family matinee of the Philharmonic’s Holiday Pops in December.

“Of course anytime you involve the military in a town like Savannah you can’t go wrong,” says Shannon. “But our goal is to always spread the music across the board, to have something in there for everybody.” 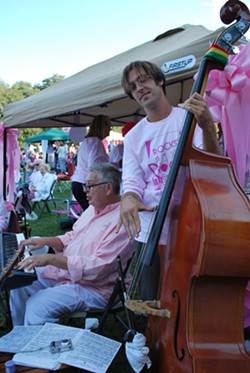 With that in mind, expect a wide ranging repertoire from the usual “pops” classical numbers on through to some more modern styles.

“The first half is more kind of ‘classic pops, I call it,” Shannon says. “There’s a piece from The Thieving Magpie, which few people have heard of but as soon as they hear it they’ll go, oh I know that one.”

No Picnic in the Park is complete without some John Williams.

“We’ll be doing an excerpt from his unbelievable Jurassic Park score,” says Shannon. “I know a lot of people are like, ‘Oh no, not more John Williams.’ But that really is such a beautiful piece of music.”

Other staples will include Copeland’s “Fanfare for The Common Man.” The latter of course has become “sort of synonymous with 9/11,” says Shannon. “As soon as people hear the percussion and horns, they know it immediately.”

If classical music’s not your bag, daddy-o, there will be the jazz sounds of Savannah’s own Jeremy Davis and Clay Johnson of the Fabulous Equinox Orchestra.

“You don’t have to be a rocket scientist to say, ‘Let’s get Davis up there to play.’ And we’ll just let those guys be the rock stars,” laughs Shannon.

In keeping with the “1812 Overture” finale, there will be plenty of upbeat, patriotic music.

“People say pieces like ‘Stars and Stripes Forever’ are sort of hokey. But there might be a 90 year-old WWII vet in the audience, and it just makes his whole decade to hear these kinds of songs,” says Shannon.

“There’s so much history out there you can’t really know. Then you realize you’ve put tears in the eyes of somebody for whom this really means an awful lot.”

An Irish native who also conducts the Jackson, Tennessee, symphony orchestra, Peter Shannon famously disdains any kind of elitism. Sunday night will feature one of his own personal favorites.

“Anyone who really knows me knows one of my favorite musical moments is actually Elvis singing the ‘American Trilogy,’” Shannon says of The King’s medley of “Dixie,” “All My Trials,” and the Battle Hymn of the Republic.

“Every time I see a video of Elvis doing that I get chills,” Shannon says.

“If you ever want to know anything about performance and music and how to tie the two together, this is it, buddy. It’s overpowering and so real.”

Shannon says while he knows Savannah well enough to know that many folks come to Picnic in the Park just to talk, nibble, and relax, he promises a high-energy show for everyone.

“I wouldn’t be chewin’ on chicken for a lot of this concert,” he laughs.