Although the Coastal Heritage Society probably isn't responsible for the recent streak of freezing temperatures, the opening of their new exhibit exploring quilts and coverlets, which takes place this Thursday at the Savannah History Museum, is certainly timely.

"When you quilt a fabric it makes it warmer, and that was used in a lot of different aspects," explains Rita Elliot, Curator of Exhibits and Archaeology with the Coastal Heritage Society. "Quilting wasn't just for bed clothes, it was for people clothes as well."

Featured in the exhibit are a range of items from clothing to quilts, and a massive loom that is over 200 years old. The items are a mix of things from the CHS's permanent collection and items on loan from local collectors.

"We're trying to show good examples of Southern textiles that were pretty common in Savannah and pretty typical to the region," says Elliott.

Although the items were typical, and functional, they also demonstrate some amazing artistry through intricately stitched patterns, or with the coverlets, tightly woven designs. They are the epitome of form meeting function.

"It was also art, and that's what we're trying to highlight when the exhibit opens," says Elliott. "Even the functional ones are artistic in their own right."

While quilts may seem more like an old necessity rather than a modern luxury, Elliott explains that they are not as old as one might think.

"Even though everybody thinks of quilting as very 1700s, it's actually more 1800s," she says. "Early on they didn't quilt because there was no scrap fabric. The way clothing patterns were cut out of fabric, you didn't have a lot of waste."

Several of the quilts on display are early examples of recycling, and utilize not only scrap pieces of fabric, but also materials like feed sacks, or even other, older quilts that had fallen into disrepair. Waste not, want not.

Some of the quilts also have an interesting social aspect to them as well. Displayed alongside several others is what is known as an album quilt, and although from a distance, it appears to be a quilt with a basket motif, there is much more to the story.

"In honor of someone, a bunch of people would get together and each make a square," says Elliott. "This one is fun because if you look closely you can see the signatures above each basket. They individually signed the quilt, and then they'd give it to the friend.

The Quilts and Coverlets exhibit is one of several special exhibits planned for the Savannah History Museum, which is located off to the side of the Visitor's Center, next to the parking lot that sits just below the street level of MLK Blvd. Elliott and others have been hard at work trying to revamp the museum's exhibits, and hope that the new series of special exhibits, including an upcoming look at Mary Musgrove, will help attract the interest of more locals to come and visit.

Included among the recently refurbished exhibits at the museum, which occupies what used to be the passenger depot of the old railroad station, are new areas exploring the history of dentistry, the restoration of the Pulaski monument in Monterey Square and a social history of the railroad in Savannah.

"Monumental Pulaski" explores both the history of the famous Polish-born Revolutionary War hero as well as the monument honoring him. An interactive portion allows visitors to explore the mystery of whether Pulaski was buried at sea or actually interred in the ground, something that is still being debated several hundred years after his death in 1779.

Opening of "Under Cover: Quilts, Coverlets and Creativity" 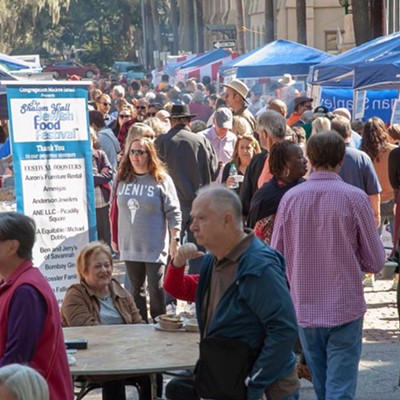