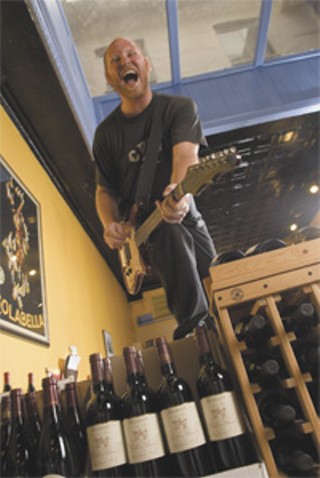 OVER THE PAST FEW YEARS, the greater Savannah area has slowly but surely begun to re-establish itself as a worthwhile destination for touring popular music acts. Much of that long-overdue and welcome progress has resulted from the efforts of a handful of locally-based, independent concert promoters.

Despite numerous hindrances (such as an aging Civic Center whose arena is too small for many top-drawing artists and a regressive alcohol ordinance barring minors from nightclub shows and concerts), these disparate individuals, businesses, colleges and organizations have enriched the cultural quality of life for natives and tourists alike.

SCAD, for example, has thrown ticketed shows by the likes of They Might Be Giants and Cat Power — and will soon present Citizen Cope. Wagatail Presents (an L.A.-based outfit with strong ties to our city) has brought Hanson and The Dropkick Murphys — and in a few weeks welcomes Cowboy Junkies. Tiny Team Concerts (which I am affiliated with) has booked such diverse talent as Daniel Johnston and the Pixies’ Frank Black (The Fleshtones headline their next event), and I Scream Entertainment has nabbed Chronicles of The Landsquid and soon welcomes Zach Deputy back to town.

Not surprisingly, each of the above entities routinely hold their events in bars and large theaters. The only place in our area that would qualify as a “listening room” (a place where the crowd is expected to give their undivided attention to what’s happening onstage) would be Randy Wood’s Concert Hall, a 100-seat showcase venue in Bloomingdale specializing in acoustic bluegrass, country and jazz.

That’s all about to change, however, as this Friday night the married duo of Jake and Miriam Hodesh present the first installment of what they hope will be a regular, monthly concert series — one designed to offer serious music lovers a new and relatively unconventional (around these parts, anyway) manner in which to enjoy live shows.

Since the young couple relocated to Savannah a couple of years ago, they have worked hard to provide the city with cultural —and economic— options they felt were lacking — such as a monthly outdoor Market Bazaar (a cross between an eclectic flea market and handmade arts & crafts fair) and an alternative to gasoline (through Refuel Savannah, their company which manufactures and sells locally produced biodiesel).

Now, these energetic and passionate community activists have set their sights on the local music scene in hopes of providing a viable, family-friendly option to late nights and loud, smoky bars.

“Personally, I like to go see music at a club where it’s dark and smelly,” admits Jake with a laugh. “But there’s a large population that doesn’t go hear music because of those attributes. I’ve seen shows on PBS and VH1 where there were closed sessions of live music in front of an intimate, quiet crowd of people. That’s another way to enjoy concerts.”

It’s that intense and reverential vibe the couple (using their New Moon of Savannah imprint) hope to replicate in the City’s own Black Box Theater at S.P.A.C.E., near Forsyth Park. Their monthly series, entitled The Listening Room, is geared toward kids as well as adults, and is smoke and alcohol free (although refreshments will be available for purchase). In other words: it’s all about the music.

In line with their outspoken commitment to championing local artists, Friday’s show features two Savannah-based acts which should appeal to a wide variety of listeners — both of whom are relative unknowns in our market, despite years of professional experience.

Dare Dukes got his start in the same early ‘90s Minneapolis rock scene that begat The Jayhawks, but moved here from NYC, where he’d forsaken a music career for work in theater. After his muse struck again unexpectedly, he devoted himself once more to songwriting and recently released the highly impressive DIY album Prettiest Transmitter of All. The ingratiating record delivers rewards repeat listening and has earned almost unanimous praise in the indie-rock underground.

Currently, Dukes juggles no less than three part-time backing bands (one in Athens, one in NYC and one here), which allows him to tour with unusually low overhead. For this gig, he’ll welcome local guitarist Kevin Rose (Superhorse, GAM) into his fold for the first time.

Jake says Dukes was a fitting choice to help inaugurate this series.

“We met Dare at one of our Market Bazaars as a community advocate and a shopper. After I looked into his work, I realized we had a gem of a musician here in town that we could help to showcase. We kept in touch and he gave us a lot of valuable insight into the way music scenes in a lot of major cities work, as well as offering a nice perspective on the Savannah scene. He’s a great representative of some of the outstanding artists that are quietly living here.”

Here's Dare Dukes playing an acoustic version of one of his original tunes at the Tantra Lounge's Open Mic night:

Rounding out this double bill will be Stan Ray, a transplanted Nashville singer/songwriter who accompanies himself on acoustic guitar and a variety of looped and sampled percussion and harmony tracks.

A couple of years back, Ray had actually launched an occasional showcase of local and regional songwriters at his now-defunct wine shop on Broughton St., but unfortunately could not sustain the endeavor.

According to Jake, Ray’s infectious enthusiasm (the wine and music aficionado does not shy away from his deserved reputation as a tireless self-promoter) played a key role in he and Miriam deciding to give this series a try.

“We’d heard that Stan was a musician who’d moved here but didn’t play much anymore,” he explains. “So, we talked him into playing at an art show we held last year and people were kind of overwhelmed by his talent. He’s a super high-energy guy who’s become something of a local personality. I think people get a certain impression of him when they first meet, but when he sings and plays his songs, he’s like a totally different guy.”

“This current project of ours is kind of a combination between his energy and New Moon’s organization. I think he’d be the first to admit that it seems like a good match. (laughs) When he’s able to harness his madness, it’s invaluable. He’s really dialed into some different genres and artists in this region that will hopefully lead to this being a welcome series.”

One of the most unusual aspects of this privately-run concert series is the fact that it’s being held on city property. That’s no accident, says Jake.

“We’ve tried to work with the City of Savannah in everything New Moon of Savannah and Refuel Savannah have done. The Savannah Market Bazaar was started on private property and then we moved it to city property. I don’t know if it’s exactly like co-branding, but we’re working with the city and they support what we want to do. It’s the same thing with this outreach. We didn’t want to do this in a bar. We wanted to show people that this is a wonderful space the city has — so let’s bring 100 people a month to gather and celebrate another facet of the arts there.”

Jake readily admits that he and Miriam have been more than a bit frustrated with what they feel are impediments to our local music scene prospering. They hoped that by utilizing a space that was not known for serving alcohol, they might avoid some of those roadblocks to success — although they acknowledge the lack of adult beverages at their Listening Room shows may wind up keeping some music fans away.

“We’d read every day in the paper about the turmoil going on surrounding the idea of drinking and live music in the downtown area,” he says. “Now, we come from towns like D.C. and New Orleans, where people are actively encouraged and invited to go see live music! There’s always tons of ALL-AGES shows going on — even in places where alcohol is present. It’s regulated, there are rules and laws that are enforced, and by and large, everything works out just fine. Unfortunately, here it seems it’s not gonna work out anytime soon, and so we didn’t even want to jump in that mess.”

“Plus, we thought this might be a unique way to approach music here locally. We want to make it family-friendly, but lively enough that 20 and 30-somethings are still interested in coming out. The trick is: how to draw a large crowd without alcohol. We feel the answer is great music and a great environment. I’d like to think that combination can trump not having alcohol for sale.”

The couple’s drive for this concert series to succeed is palpable in the way Jake Hodesh recounts the numerous times he and his wife have found their proposals met with indifference or outright disdain since settling here.

“People have doubted much of what we have done here in Savannah,” he says.

“They told us we couldn’t —or shouldn’t— do an art show in the summer, that no one would come. Yet, we had over 1,000 people and huge sales. People told us our Market Bazaar wouldn’t work, and it’s been both fun and successful — with over 50 vendors working each time out. The same with the Biodiesel project. It took us two years, but we’ve converted many of the city’s large vehicle fleet to run on Biodiesel.

“I want great local and regional acts, and I want to (be able to) pay them well. I want an intimate setting where people can enjoy music without coughing because of cigarette smoke. I want a place where kids and parents can enjoy live music without drunks bugging them.

“I think this can be that place.”

He and his wife estimate that with all the expenses they are incurring, they’ll need to sell an average of 60 seats to each month’s show in order to break even, and Jake notes that they have “already sold tickets” and that he’s heard from several people who are excited about this debut installment.

“Our goal isn’t lofty: 100 people, once a month. With persistence, I think we’ll eventually pack the house.”

In the end, however, he says this entire effort is really all about adding to the diversity of cultural options which are available to Savannahians, and that it reflects he and his wife’s desire to see their new home meet its full potential.

“I know it’s a little cliched,” he allows, “but the main thing for us is, this is our community. We feel strongly about that. We love living in Savannah, but there are certain things that are still missing here.”

“Groups like the Tiny Team are doing their part to help improve the situation, but there needs to be an army of people putting on music shows. This is our small attempt at filling that void. We’re excited about it and hope it goes strongly.”

Cost: $15 ($10 for kids/students/seniors) cash at door or charge online