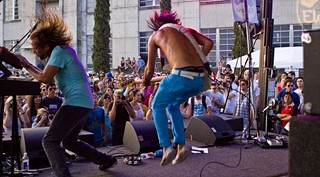 You are hereby advised to run, don't walk, to see this killer rock ‘n' funk band, in their second local appearance since January (and the Hang Fire walls are still reverberating from the group's mighty wallop that time around).

The Bright Light Social Hour is from Austin, where there's a musician lurking around every corner (and they're all good, and the competition is rightfully fierce). And how's this for a recommendation: At the 2011 Austin Music Awards, held during the SXSW conference in March, the Socials took Band of the Year, Album of the Year, Song of the Year, Best Bassist, Best Keyboard Player and Best Producer.

This was all for the CD The Bright Light Social Hour, a breathtaking showcase of rock ‘n' roll musicianship, R&B-infused white-boy funk, psychedelia, solid songwriting and inspirational four-part harmony.

Another cool thing about the band members is their irreverent sense of humor - despite making such solid musical statements, they don't seem to take things too seriously. To finance their self-titled album, they created a series of online videos offering their services - everything from washing cars to scrubbing bathrooms to baking cookies - to anyone who'd be kind enough to send money. The album was promoted with another series of irreverent videos, entitled The Vagina Dialogues. Who could resist? See thebrightlightsocialhour.com

Fresh from his stellar performances - four of them - at the Savannah Music Festival, Ike Stubblefield returns to town for a Saturday go-round at Live Wire. Drummer Jorel Flynn and guitarist Grant Green Jr. make up the rest of the band, and they're monster players, but the night belongs to the Atlanta-based Stubblefield, who's a globally-acknowledged master of the Hammond B3 organ.

The roster of big names with whom he's played is impressive: B.B. King, Rod Stewart, Curtis Mayfield, Ike & Tina Turner, Boz Scaggs, Al Green, the Jerry Garcia Band and every single musician (apparently) who's laid down a groove on the Georgia jam band homefront. Oh, and he filled in for Billy Preston on one of Eric Clapton's world tours. Is that cool enough?

American Aquarium - a band that needs no introduction, but here's one anyway: The best Americana rock ‘n' roll south of the Mason-Dixon - makes its semi-annual pilgrimage to the Jinx Saturday (that's May 21, if you're searching for a calendar) ... it's also a good week for live music at Hang Fire, what with the Bright Light Social Hour and all: On Monday, check the electronica dance/pop duo Parallels, consisting of eccentric-throated vocalist Holly Dodson and composer Cameron Findlay (former drummer for Crystal Castles) ... Making their debut with a show Friday at the Congress Street Social Club: Cee Cee & the Creeps, an ‘80s-style classic rock band fronted by vocalist Cecelia Arango, who played the irrepressible Yitzhak in last fall's Hedwig and the Angry Inch at Bay Street Theatre ... Quintron and Miss Pussycat return to the Jinx Monday; the New Orleans duo combines hypnotic electronic weirdness ("swamp tech") with giant day-glo puppets and infectious theatricality ...