The Chathamization of Collin Moulton

COMEDIAN Collin Moulton actually does cast off his flip-flops at his Barefoot Comedy Club on Tybee Island. But apart from that—and the appearance of some live blue crabs at the end of his show—you wouldn’t say anything about his gig is on Tybee Time.

And that’s just in the past month. “That sounds exhausting!” he says as I rattle off a list of recent cross-country gigs. “I think I have to nap now. I’m out and done!” But Moulton isn’t going to be napping anytime soon. He has two kids and a third on the way.

Parents might understand how that absolves him from any violation of our speed limit of life here. He also just got his 31410 last year. Before that, he had a Los Angeles zip. And entertainers of all sorts generally operate at a Hollywood pace. 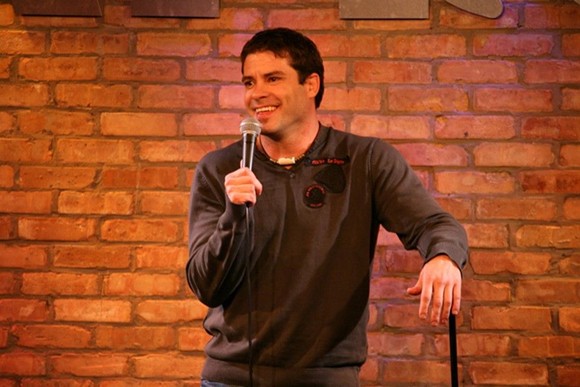 Which is one reason he moved to our neck of the marsh to begin with—to slow down while at the same time hauling that career up. He’s bringing top-class talent to the beach.

On the night that I attended his monthly show at the Tybee Post Theater, he had Conan and Ferguson alumnus Bengt Washburn along for ride. It was well worth the drive to Tybee Island. And I’m a Southsider.

“In a place where you spend so much of your money on just your general overhead and resources, you tend to batten down the hatches and stop living as much,” he says of his decision to Chathamize, to coin a term. “I engage fully and live.”

That means taking his kids to the beach—a warm-water beach where you actually can swim. They also can explore the wild—a much kid-friendlier wild than high desert LA.

And he travels so much, heck, we have an airport here! Entertainment’s all online these days, anyway. So Savannah it is! There’s also an excellent martial arts community here apparently. I had no idea! But this fit comic rolls with a purple belt in Brazilian jiu-jitsu.

“As an animal, the human being needs to be challenged,” he says. “Like at our core of what we are, we have to be physically challenged or something goes wrong inside of us.”

He’s not content to run or bike his way to fitness. Moulton fights on the ground like an animal with prey beneath him. You wouldn’t want to challenge him on the mat or mic.

That’s because his show is hilarious. And his four podcasts—yes four, plus a new one recorded at his Tybee shows—display curiosity, depth and adventurousness.

In “World of Friends,” he laughs with his comedian friends. In “Post Roll,” he talks about martial arts. In “Ridecast,” he chats with taxi drivers. And in “Loss,” he indulges in some philosophy and psychology to help us get over our personal and existential grief.

“We’re all processing loss,” he says. “That’s what life seems to be about, these pivotal moments when we redefine ourselves based on how we’re impacted by these losses.”

Yes, I’m sure this barefoot comic has lost something in leaving LA—and not just traffic. But he’s gained and we’ve gained. So take off your flip-flops with him. His show really is no-BS funny.