The sands of non-attachment (or: Spring, you filthy slut) 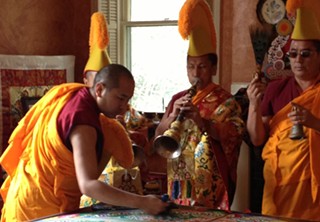 It always sneaks up on me: One day, the evenings are chilly and dark; the next, sunlight floods the kitchen as we're clearing the dinner dishes.

Everything else seems to have gotten the memo. The daffodils have been bursting out their yellow trumpets for weeks. The azaleas are gleefully fulfilling their annual chromatic spectacle. Cardinals and bluebirds whistle and flirt from dawn 'til dusk.

To quote the mystical Bohemian scribe Rainer Maria Rilke, it is spring again, and the earth is like a child that knows this poem by heart.

Unfortunately for us humans, Daylight Savings makes the turning of the season feel less like a gentle nudge by a beneficent Mother Nature than a sharp bludgeoning about the head by the Lannister hound in Game of Thrones.

Add in the shimmer of golden pollen coating our cars and nasal passages, and the epic majesty going on outside could be entirely obscured by spring cleaning and snot bubbles.

For me, the Spring Equinox on March 20 also brings on an inner anxiety. Not only does it mark the unsympathetic march towards another sweaty southern summer, it's a reminder of life's inescapable ephemerality.

I don't need any more reminding, with my children sprouting into full-grown people and another set of tires going bald. Frankly, I could use a nice coping shot of denial, but that only increases suffering. Or so I've heard.

"Let go of your attachments," counsel the Buddhist sages, making me clutch my daughter a little tighter. (I keep trying to sit on her head so she'll stop growing so fast, but she's a biter.)

There are books full of the wisdom from these bodhisattvas, some ancient, some working for the enlightenment of all beings via their own YouTube channels.

"Make friends with impermanence," they enjoin, presumably inhaling deeply through their clear nostrils, immune to the effects of pollen dust.

Please. Constant change may be an existential fact, but she is not such a fabulous friend when you're looking for a shoulder to cry on. Or say, someone to go out on the town with, since she'll totally ditch you for the cute barista guy while she's holding your wallet.

No matter how much I'd like to party with impermanence or meditate on the noble truths, I remain hopelessly attached to people and my iPhone and the belief that I will be shopping in the juniors department forever.

Still, I sense that embracing non-attachment — or even just giving it an airkiss once in a while — is the path to a serene and fulfilled life (barring the always-imminent possibility of winning the lottery and buying my own Polynesian island.)

I had the opportunity to observe non-attachment in action a few weeks ago, when the monks of the Drepung Loseling Monastery came through Savannah to create a sacred Tibetan sand mandala. As part of their effort to bring their gentle teachings to the world, these serene robed ones tour from city to city, sprinkling colored sand into a circle of intricate symbols in a breathtaking combination of performance art and spiritual divination.

But anyone who saw these fellows doing their thing at the Jepson a few years back may recall that things do not end well for the mandala.

The monks will return for another public demonstration at the Jepson this fall; this time, however, only a handful of people were there to watch. Gary and Greg Butch of Elizabeth's on 37th occasionally host these low-key rituals in their famed restaurant to help raise awareness and funds for the displaced monks and their leader, His Holiness the Dalai Lama, and the brothers have been quietly supporting the cause of the Tibetans for a decade. They were nominated for a Nobel Peace Prize in 2012, though they are quick to duck any recognition, standing unobtrusively in the back of the small room where the monks prepared the mandala's closing ceremony.

The air almost crackled as the seven monks filed in, clad in their signature saffron and maroon garments and identical pairs of plain brown oxford shoes. The mandala itself — the product of hours upon hours of work — sat on a square wooden table, its small piles of colored sand precisely tapped out into lotus flowers, complex knots and the eight-spoked wheel representing the path of the Buddha.

Each mandala is created with a particular intention, this one meant to draw the universal compassion of the Green Tara, the Sanskrit goddess of salvation. Green Tara also governs earthly cycles, so I think we can hold her responsible for all the pollen.

Donning enormous fringed yellow hats, a couple of monks lifted cymbals and drums, while others unfurled a pair of telescoping horns not unlike a daffodil. One began to chant in a deep glottal tone that reverberated off the walls: Om mani padme hum. The others joined him in the mantra: Om mani padme hum Om mani padme hum, a sonorous symphony of meditative devotion.

Just when I thought I might levitate with the vibration, the chanting stopped. In the sudden silence, one of the monks smiled and bowed, walked over to the mandala and calmly shoved a knuckle into its perfect beauty.

With a little broom, he methodically swept every last grain into a spiral-shaped pile, giving as much deliberation to the destruction of this labor of lovingkindness as to its creation.

It was at once humbling and liberating to witness, a visceral lesson that though our efforts at immortality are hopeless, they are inextricably part of the grand cycles of birth and death, growth and decline.

I hope to remember it the next time three days' worth of writing disappears into the void of my MacBook.

I left Elizabeth's with a tiny souvenir packet of the mixed-up mandala sand in my pocket, a little less attached to my own gerbil-wheel need to wring my hands over another season. Life will happen no matter what, and it'll be over before we know it. May as well smell the flowers than curse the darkness, or something like that.

Instead, I walked out into this unbelievably opulent spring, where — to quote Mr. Rilke again — everything was blooming most recklessly.

With an open palm, I wiped off my windshield, smiling at the yellow handprints I left on everything I touched.