NEXT to the Publix, as it seems most everything on Whitemarsh Island is, sits a quaint little spot that I am positive many people have passed without even realizing.

The Corner Grill, truly a hidden gem, is one that I was lucky enough to notice while heading through the parking lot one day.

As the story goes, co-owner and Chef, Paige Harris, worked as a landscape architecture for over a decade before deciding to take the leap to follow his dream. His wife and co-owner, Terry Harris, has supported him every step of the way and works on the business side of the restaurant, allowing Paige to do what he does best— cook. 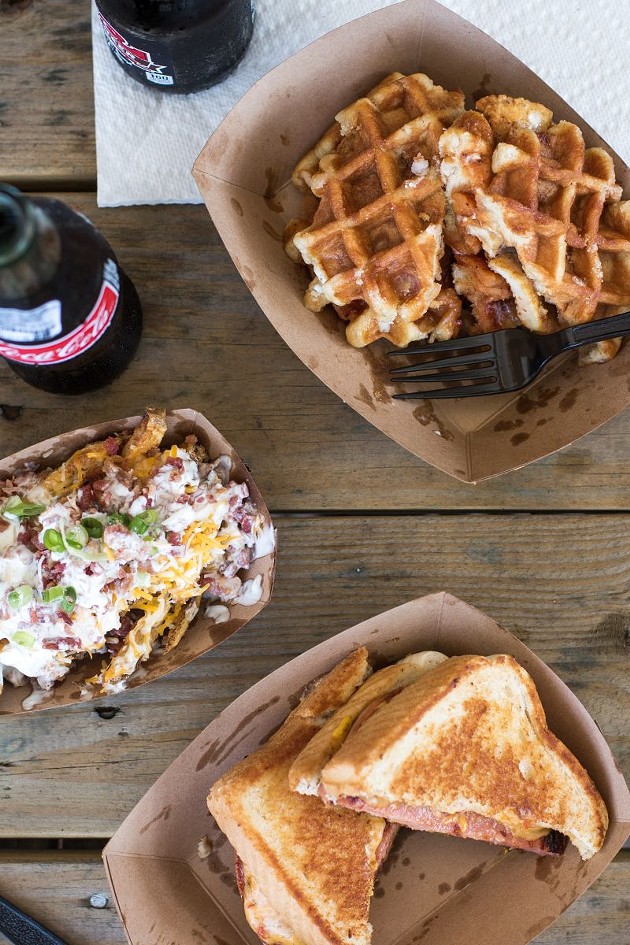 Originally Paige did not set out to create a “burger joint,” but the menu “organically came to be,” Terry told me.

This is the dripping, gut warming, you-are-going-to-need-a-hundred-napkins kind of food that everyone loves. It is good for brunch, lunch, dinner, to eat while watching sports, late night, to cure a hangover, or when you just feel like being naughty.

You better go on the verge of death due to starvation, because Paige is not playing around with the portions he serves up.

Crowd favorites change from week to week, which is understandable when your menu is overflowing with decadent and unique creations — most of the time it has been the Gyro or a burger.

Paige told me that this week her “favorite is the Caesar Chicken Sandwich,” partially because she loved the burgers so much she was eating too many.

As for Raine Morrison, the young student working the counter, she suggested I try her current favorites: the Melt and the Gyro.

The most unique sandwich I have ever put in my mouth is called the Brunch. Two thick, chewy Belgian waffles are used as the vessel to carry a juicy piece of fried chicken. 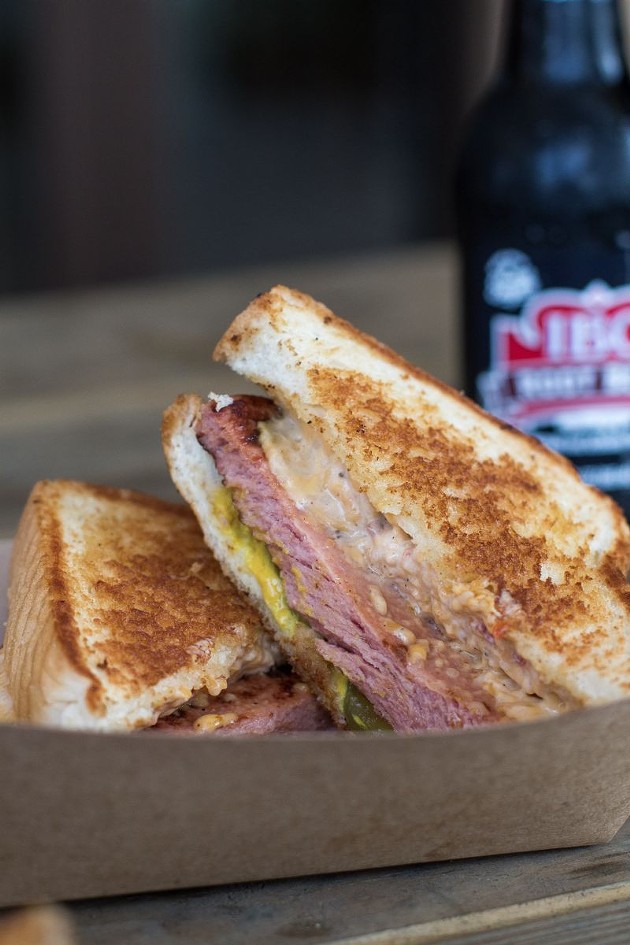 That is right! A chicken and waffles sandwich, and it is one that would be named best in show. You do not become best in show by simply being made of two waffles stacked together with some fried chicken and a little syrup.

Something more has to happen—the je ne sais quoi. Paige was kind enough to tell me exactly what the little something was that he adds to make the sandwich magical: dried onions.

Mopped onto the canyons of the golden brown waffle top is a chipotle sweet and sour sauce and ranch. Before wolfing down the sandwich, rather quickly I may add, I would have never imagined ranch and sweet and sour could work so harmoniously together. A punch to the palate is the best way to describe the flavor of the sandwich and is followed by the sweet flavor of sugar and the cooling effect of creamy ranch.

I would compare the Wade, another out-of-this-world sandwich, to a Southern version of a Hawaiian spam sandwich. This time us Southerners out did our Pacific surrounded distant cousins to the west, which is not surprising when you top a sandwich with pimento cheese.

I believe this sandwich would make Paige’s father proud, and not because it is named after him. With bologna cut that thick, the taste brings a nostalgia that makes anyone smile.

First the bologna is seared on the flattop, giving it a nice crunchy crust. It is then layered between two slices of buttered toast along with a mountain of pimento cheese, pickles, and mustard.

Each ingredients has its own role, working together like an army of ants to devour your taste buds as their next prey.

For the side, the options are as vast the number of bachelorette parties that can be found in City Market on any given weekend. And I can assure you, eating any one of the Corner Grill’s mouthwatering side items is much more fun waking up after a long night downtown.

If it is your very first time eating at the Corner Grill, I would suggest the Feta Fries, which you could think of as their signature side item. Crunchy hand-cut fries are heaped among chunks of feta and fresh green onions. The feta brings the right amount of salt and tang to the party, and the green onions brighten the soul-filled hearty taste of the dish.

Just as indulgent are the Potato Skin Style Fries, not to be confused with actual potato skins. Those same hand-cut french fries are paired with all the ingredients that you know and love in a potato skin: melted cheese, bacon, green onions, and of course ranch that has oozed into every pore of this cavernous dish.

The mountain of fries is nothing short of sinful, but who can resist a revamp of a classic American dish.

A man after my own heart, “Paige has always been a fan of sauces...[he] couldn’t even stand plain chips growing up as a kid without some sort of sauce to dip them in,” Terry told me.

I am not going to list every sauce available, mainly because it may take up the rest of this article, but I will tell you the list includes the classics like ranch and honey mustard and more unique artworks like feta dressing and something called boss sauce.

What I will suggest is getting almost every sauce possible, stopping short of looking like a crazy sauce lady, so you can dunk every single bite into a different sauce and create different flavor combinations.

Wilmington Island and all of Savannah may be lucky enough to see what the Harris’ come up with next. Terry elaborated that they “would like to be able to expand into multiple locations or even try to open some other style restaurant.”

Speaking of The Corner Grill