17-YEAR-OLD LaTanya "Taye" Williams was killed by a bullet not intended for her.

There were four people in the house on Staley Avenue: Taye, her 27-year-old cousin Akeem and two male acquaintances ages 30 and 38.

As ten bullets shot through the dusk, one hit and injured Akeem and one fatally struck Taye. During the golden hour on June 10, 2020, Taye’s carefree life as a rising junior at Beach High School was stolen from her, just as if she was nothing more than a casualty of a war that was not hers and one that Savannah Police Detective Kevin Toliver still does not understand. 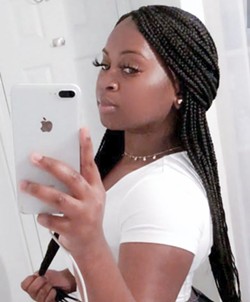 Toliver, a five-year veteran of the SPD, was only about three months into his stint as a detective in the homicide unit when he was called to this crime scene that served as his first and currently, only case. He had just recently transferred from the aggravated assault unit, so he was no stranger to shootings and drive-bys.

Taye’s case was not a far cry from Toliver’s acclimation to reckless and vengeance-fed gun violence, but it did possess one distinctive contrast: This go-around, his victim wasn’t dodging his inquiries from a hospital bed at Memorial Health University Medical Center, they were flatlining on a table after medical staff worked frantically to save yet another young Savannah life.

Unfortunately, on that day, their efforts were no match for the feeble and indiscriminate harvest of death that for Taye, happened at the conclusion of a three-minute drive in Akeem’s rented Ford Fusion from Westlake Apartments to the house of one of the car’s occupants on Staley.

Afterwards, someone was supposed to buy her candy at the store, which was the only reason she was in the car in the first place. It was a fairly typical request from a teenage girl looking for a sugar fix.

However, upon pulling into the home’s driveway, an unknown vehicle driven and occupied by an unknown number of individuals who presumably recognized the Fusion and followed it, opened fire without so much as halting the hiss of their tires over the busy avenue.

Why? Toliver doesn’t know for sure, but in reality, the reason can only be deemed insignificant when accompanied by death.

What he does know from looking at the labyrinth of impact marks at the crime scene, is that there was no precision and they didn’t stop moving, not even to verify the presence of their target(s) nor to assess the lives in the car that they had no conflict with, but regarded as dispensable.

Another certainty: The shooting, like most in Savannah, was not random. Maybe it wasn’t planned and maybe it was executed with the fidelity of passing a fruit stand and deciding you wanted a bag of peaches, but it was 100 percent deliberate.

Guns on the streets multiply as if they can breed and descriptions from witnesses, or more accurately, lack thereof, have almost taken on anthropomorphic characterizations because rarely does anyone ever attribute an actual person at the end of the gun.

However, for Taye, something like this wasn’t even on her radar. Friends and family described her as kind, introverted, well-liked by most and loved by all who knew her. Akeem and the Fusion’s other two occupants, however, vaulted out of the car and ran to the back of the house as if the response needed to survive was a carefully choreographed dance.

Taye never made it out, except after the family inside the house called 911 and Savannah police and paramedics arrived on-scene to attempt to revive her.

As I began to write this story, it occurred to me that there are two tragedies in this case. The first and most obvious, is the murder of a young girl who never got to dip her toe in adulthood, but died in what were really adult matters, never matter how naïve their resolution.

The second is that this shooting occurred before the sunlight just barely melted into night. On this particular day, while the light from the sun was partly clouded, it still had the clarifying depth of discernable vision.

It also happened on an avenue that while usually busy, was particularly bustling that evening, so much so, that when authorities had to hold the crime scene for three hours and block off the road, it caused a considerable amount of backup.

Yet, when Toliver questioned witnesses, no one would state anything beyond what was already known. There was a car, there was a gun and there were some gunshots.

Taye’s cause of death was being in the wrong place, at the wrong time. Her killer(s) walk free, but they are not the only ones who must carry the burden of her death. Those who saw the car, recognized the people in it, know what the shooting was about, know who the target was, or who have information but have not reported it, must also bear the weight of this unredeemable tragedy.

Understandably, crimes like this can carry grave consequences for those who step forward and speak to police. That’s solely why Crime Stoppers of Savannah-Chatham County exists.

When you call the 24/7 crime, tip-line at 912-234-2020 or submit an online tip to SavannahChathamCrimeStoppers.org, you will remain completely anonymous. You will also qualify yourself for a cash reward up to $2,500, but that is nothing in comparison to bringing justice to the most unjust of circumstances.

Taye was buried on Saturday, June 20 at Woodville Cemetery, just one day before the summer solstice, which marks the longest day of year. It was as if the hours of the day were made to extend just for her.

A nod to a very full life of love and innocence that deserved to be lived, but was instead callously punctuated with a period that with this article, I am so desperately trying to turn into a semicolon. This story enrages me and I want to write the conclusion that it deserves, but right now, all I have is a plea, and the following period.