IT'S THE earliest hours of Saturday morning, and you and your squad are famished from a Friday happy hour that turned into an all night party. (I mean, this is Savannah. Isn’t this every Friday?)

One of you wants to tear into something meaty on bread, someone else is feeling a crunchy salad and the full-out vegan with gluten-free tendencies just missed her Lyft. Your best bet to avoid a bar brawl is to head to the Diplomat Luncheonette, where pleasing everybody is the aim.

“We want to meet different needs and tastes in the same place with a limited amount of space,” explains Chef James Levens, who preps and bakes behind the counter of the 400 square-foot former hair salon next to the Original Pinkie Masters.

“We’ve got that go-to hearty stuff, but it’s great to see people getting excited about vegetables and salads.”

The Savannah native opened up shop in early September during Hurricane Irma’s evacuation and cooked through the storm, and the Diplomat has been finessing palates with its signature sandwiches and flavorful sides ever since. While the proximity to Pinkie’s makes for wild weekends, Chef Levens holds it steady for the lunch crew from 11am to 6pm Tuesday through Sunday, offering eat-in, take-out and downtown delivery to businesses and residences. On Thursday, Friday and Saturday nights, he opens back up from 10pm to 2am.

The eponymous offering is described as the love child of a French Dip and a Philly cheesesteak, a generous stack of sliced beef and cheddar served warm on a housemade Dutch Crunch roll ($12). Like the giant mattress of the same name, the California King ($11) is a massive bed of soft focaccia laid with layers of turkey, bacon and avocado, and the breakfast-themed Champ ($6) is hardcore bacon-egg nourishment no matter what time of day.

The vegetable-inclined will find a delightfully robust option in the Beet Bahn Mi ($9), a shockingly purple mountain of shredded beets pickled with satisfying crunch and zest, presented on the aforementioned Dutch Crunch roll leavened by Chef Levens himself. (All the breads are miraculously made in the tiny kitchen except for the gluten-free slices.)

While the luncheonette moniker means business, some of the best items on the menu aren’t sandwiches at all: The Samurai Salad ($10) mixes fresh-from-the-ground lettuces from Canewater Farm with julienned onions, carrots and cukes tossed with a lip-smacking nori vinaigrette and topped with sesame seeds. The Grain Bowl ($9.50) sparkles with spicy pickled radishes and nutty brown rice; the tahini and avocado give it a creamy decadence that you won’t regret in the morning.

Sides ($5 or three for $12) include crisped sweet potato steak fries seasoned with pomegranate and sumac, and the soon-to-be-world-famous Burnt Broccoli, an addictive amalgam of roasted spears, cubed eggplant, feta chunks and a veritable garden of fresh herbs (mint, parsley, tarragon...there’s too many to list). Grab a Mexican Coke, Jarrito’s or a Topo Chico sparkling water ($2.50) to wash it all down, or duck next door for an adult beverage from Pinkie Master’s. 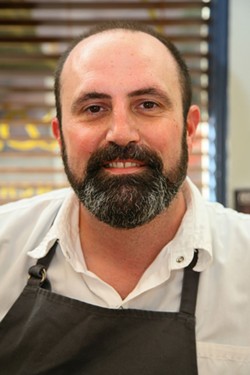 Instagram followers already know to be on the lookout for specials like a fat meatball sub and tomato pie, and the fleet-footed can grab one of A Squad Bake Shop’s vaunted donuts and sweet rolls on Fridays before they sell out.

It’s true, the Diplomat is tiny, but there’s still plenty of counter space to eat in and watch the pedestrian parade along Drayton Street. During glorious weather, it doesn’t get much better than enjoying your meal on a bench in nearby Madison or Lafayette squares.

Pinkie’s owners Mike Warren and Matt Garappolo partnered with Levens to build out the space and had a say in the menu (you can thank Matt for the New Jersey-style pork roll), but the chef describes their collaboration as more than just an investment.

“We have a symbiotic relationship,” he says of their shared aesthetic and adoration for downtown Savannah. “We’re looking out for this part of the block. It’s good grassroots business development.”

Levens ought to know, as he grew up here and holds a business degree from Georgia Tech, which led to a bunch of “officey-salesy”-type jobs around Atlanta until he chucked it all at 27.

“I finally paid off my student loans and could afford to not make any money,” he explains with a laugh. “I’d always loved food, so I decided to go for it.”

After passing around his lacking resume, he landed a gig as a “salad boy” at Highland Bar & Grill in Birmingham, AL under Executive Chef Frank Stitt.

“Frank was very strict, real gruff, of the Alice Waters school of using local ingredients to create French, Provence-style dishes,” he recalls. “I mostly got on his nerves but I tried hard to learn everything I could.”

A few years later, he bounced back to Savannah for short stint at Local 11 Ten, then moved with then-girlfriend-now-wife, Kate, to New York City. After staging around at different restaurants, he lucked into a spot at the Spotted Pig, learning the nuances of acidity and texture at the elbow of Chef April Bloomfield of Mind of A Chef fame. A few years later, he found himself on the line at one of Manhattan’s most storied restaurants, Gramercy Tavern.

The cold and constant hustle of the big city began to wear, and the couple came back to Savannah, where Levens made his piquant mark in the kitchens of the Sparetime, the Florence, and Smith Bros. Butcher Shop.

“I think starting late and working hard to catch up made up for my lack of schooling,” he muses of coming by his culinary education through the back door. “I learned how to get the baseline down so I could start adding my own thing.”

That “thing” includes combining traditional and Mediterranean flavors in unexpected ways and not being afraid to push his work ethic to the max. Catering to both the downtown lunch business and late night party people can mean 16-hour days, but Levens plans to keep the Diplomat Luncheonette open at all hours to satiate the masses.

Even if the masses show up at 1:30am with their heels in their hands shrieking about extra orders of Burnt Broccoli.

“Everyone who comes in at that hour seems drunk or overjoyed,” laughs the chef. “But they all seem happy.”