I KNOW, I know, you probably thought I’d forgotten about it.

It’s been so long since I’ve kvetched about the Savannah River deepening, I’m sure it seems that way. But I was merely taking a break from worrying about my most unfavorite civic project to wring my hands over other things.

I promise, it’s still there, gnawing away at the back of my mind like a rat burrowed in a sock full of peanuts. And a few recent updates have chewed a hole in the toe.

Some of you may be new to my nutty metaphors, so in the words of the inimitable Inigo Montoya, let me ’splain. No, there is too much. Let me sum up:

Last fall, after 15 years of plotting and planning, the U.S. Army Corps of Engineers finally began The Savannah Harbor Expansion Project (SHEP), a 38-mile dredge that will take the current shipping channel from 42 to 47 feet so that the Georgia Ports Authority can welcome the gargantuan new ships passing through a newly-widened Panama Canal (a project beset with its own problems and delays).

Heralded as an economic savior and job creator for the state, SHEP will cost taxpayers $706 million—with nearly half of those dollars applied to environmental mitigation and ancillary measures to keep the river alive and ocean salt out of our local drinking water. The price of progress, you understand.

Over the years, I’ve spent a lot of words (here, here, and also here) pointing out how few permanent jobs SHEP actually creates and the weak logic of spending that kind of bank and destroying that many acres of wetland for what ultimately amounts to less ship traffic.

Not to mention how totally lame it is that the 97 million gallon freshwater reservoir built by the Corps will have to be maintained with City of Savannah—not state—funds, even though the city receives not a single dollar of direct revenue from the tax-exempt port (though of course it does benefit indirectly from port-related private enterprises).

Other than making me extremely unpopular at certain cocktail parties, such criticisms have had absolutely zero impact. Not that I ever expected they would. That wasn’t even my motivation; it’s just that the hunky-dory spin given to this project makes me uncontrollably obnoxious.

Progress always plunges on: The Savannah River will get deeper “come hell or high water,” Vice President Joe Biden told us when he came to call back in ’14, and his truth has come to pass. The Big Dig has had its shovels in motion off Tybee Island for quite a few months now, and all is going to according to plan. Well, almost.

Last month, President Obama released his 2017 budget recommendation, and it only contained $42.7 million towards SHEP—less than half of what Gov. Nathan Deal has demanded per year to keep the project on track.

Deal, who has already put up $262 million of state funds to fire up the dredges in the outer harbor, railed against the paltry allocation, which he says underfunds the “most critical dredging project in the country.”

(The other 17 U.S. port projects seeking federal help might disagree.)

No matter, SHEP will continue to move through fiscal 2017 full steam ahead—aided by a $24 million infusion from the Corps’ own discretionary fund. However, the 2018 budget is anyone’s guess—along with what new President will administer it.

If the infantile insanity about the size of candidates’ genitals is any indicator, the U.S.’s lack of cohesive strategy around its disparate state ports will not be a priority.

It also surfaced in February that several endangered species had been killed by dredges in the Savannah River. Sammy Fretwell first reported in the Columbia, SC newspaper, The State, that two Atlantic sturgeon and a green sea turtle had been churned up by the SHEP hoppers since Jan. 1, and a loggerhead turtle had died during routine maintenance of the channel. The severed flipper of a giant leatherback turtle was also recovered around the same time, though NOAA biologists determined the animal was more likely hit by a ship rather than sucked into the hoppers.

The “incidental take” limits in the biological opinion of the National Marine Fisheries’ Service (NMFS) allow for a loss of a total of four Atlantic sturgeon over the entire three years of the dredging—which means SHEP has already reached half its limit in the first few months.

The project maxes out at three green sea turtles, 16 loggerheads and 11 Kemp’s Ridley sea turtles, a highly endangered species that migrates past the Georgia Coast to its nesting grounds in the Gulf of Mexico.

It’s something for activists to watch, though it must be noted that in addition to other precautions, the Corps has implemented a trawling net in front of the hopper in order to catch and relocate wildlife. In its biological opinion, NMFS estimates 51 turtles and 20 Atlantic sturgeon will be moved out of harm’s way during the project.

“We regret the taking of any species; however, some adverse impacts are an unavoidable result of keeping the waterways open for commerce,” writes the infallibly polite Billy Birdwell of the Corps’ public affairs office. “We assessed those potential impacts to endangered and threatened species as part of [SHEP’s] Environmental Impact Statement.”

But even if kills exceed NMFS projections, it’s not like SHEP will be shut down over turtle soup. The limits would likely just be amended, as there are bigger fish to fry here, as it were.

Over the summer, the Corps awarded a $100 million contract to Florida-based CDM Constructors, Inc. to build the dissolved oxygen systems on Hutchinson Island and upriver in Effingham County that are supposed to mitigate dangerously low oxygen levels caused by the deeper channel, especially during the summer. (There’s that “mitigation” word again. To invoke Inigo again, I do not think that word means what you think it means.)

The DO systems will consist of a dozen domed bubblers called Speece Cones that periodically saturate water with oxygen to prevent the suffocation of fish and wildlife. Such technology has never been used in an open water environment on this scale, but don’t worry: The terms of a 2013 lawsuit settled with the Southern Environmental Law Center dictate that the Corps has to prove they actually work before it can start digging down into the inner harbor.

Yet...no matter what, we end up with a river that can’t survive without iron lungs. Take a deep breath and think about that.

Birdwell says contractors will break ground on the Speece Cone farms very soon, along with another $40 million “mitigative” measure: Thalle Construction Co. of Hillsborough, NC was recently tapped (tell me again how this creates local jobs?) to build us Savannahians that tidy freshwater reservoir upriver at the Abercorn Creek intake, so that when the deeper channel pushes the ocean even further upriver, we’re not drinking saltwater.

“The city’s treatment plant can use water from the impoundment on occasions when high tides and low stream flow result in higher chloride levels,” explains the Corps’ Savannah District’s website.

The concern isn’t just salt in our sweet tea. Studies indicate that high tides are getting higher, and increased chlorides in the water will make it more corrosive, increasing the the risk that it could leach lead from some of Savannah’s 750 miles of aging distribution pipes. The Corps assured in a 2011 report that this would probably never happen. But it’d be real nice to check again, considering Flint just poisoned its entire population—with river water that corroded old lead pipes.

I don’t doubt that the hard-working engineers and scientists are doing the best job they can to meet their objective: Get ‘er done regardless of drinking water hell or tidal high water. But I still just don’t get the cost/risk benefits, no matter how many times that vague “$5.50 returned for every dollar spent” flag gets waved. It’s always a shock to find out I’m not the only one.

“I’ve been in the shipping business for over 40 years, and it doesn’t make sense to me either,” a high ranking executive in a local import/export business recently told me after swearing on my grandmother’s grave that I would not reveal his name.

“The amount of ships that will come to call may be bigger, but there will be less of them—there are only so many to go around, ya know,” he says.

“What captain wants to snake their way up the Savannah River when they can just sidle up oceanside in Charleston or Jacksonville? Plus, if the federal money doesn’t come in, which it probably won’t, the state of Georgia cannot afford to do this without a major tax increase.”

There’s also the matter of the proposed $4.5 billion Jasper Ocean Terminal, to be built on the South Carolina bank of the Savannah River. In November, the Georgia Ports Authority signed an agreement with the State Ports Authority in South Carolina to build the 1,500-acre shipping terminal, which could open as early as 2025.

But why would Georgia want to compete with itself with another, more convenient port right downstream?

Our friendly anonymous source opines that it’s a stalling ruse to appease the people of Jasper County and the joint venture will never happen.

“The whole thing is smoke and mirrors,” he laughs ruefully.

“The whole world is going off shore anyway, and more and more ports are becoming automated. So ultimately, that won’t create more jobs, but less.”

Look, it’s all speculation, whether you’re betting on the risks or the returns. No one can make the case that the Port of Savannah isn’t a vital economic anchor for Georgia, and most folks around here seem to believe that if its growth means some sturgeon get chopped up and our coffee tastes a little salty once in a while, it’s worth it.

So I fully accept that nothing can or will turn the SHEP ship around, and that the peckings of this mouthy columnist are just flotsam under the hull.

But it’s still a free country, and I can holler into the spray if I wanna.

Westside Arena: Contaminated, with a chance of flooding 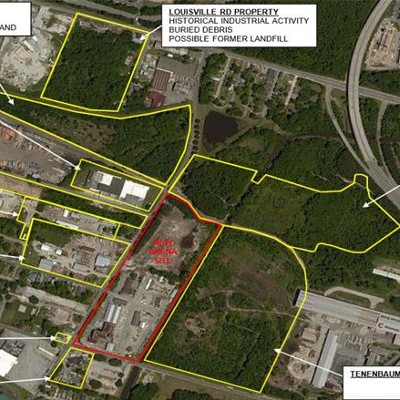