The end of the road (for a while)

Widespread Panic is about to take a much-needed 'summer vacation' 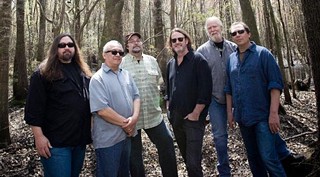 After 25 years in the top tier, Widespread Panic is about to disappear for a while.

For bassist Dave Schools, who co–founded the hard–playing Panic in Athens, then watched the band enter (and remain firmly ensconced in) the upper echelon of road–warrior jam bands, 2012 can’t come soon enough. The group’s intention is to remain inactive for the 12 months.

Of course, Panic will ring in the New Year with a “see ya” blowout, in Charlotte.

The band’s pair of sold–out shows this week in the Johnny Mercer Theatre will be the last Savannah sees of them for a while, but Schools – who now makes his home in Northern California – is almost always involved in one side project or another. Who knows – he might turn up next summer, sitting in with some other incredble band at Live Wire Music Hall.

That’s the nature of jam band players – no matter how long they’ve been at it, they’re always restless and itching to play.

Are you concerned that you won’t know what to do with yourself when you spend a year off the road? Won’t it be like The Shawshank Redemption – you’ve been institutionalized to life on the inside?

Dave Schools: It’s really funny, I’m in my hometown of Richmond, Virginia, and yesterday a friend of mine quoted Shawshank Redemption and asked me the same question. As far as bring institutionalized, I think that’s true to a certain degree for me personally. Because any time we’ve ever taken any amount of time off, I’ve pretty much filled it with some other musical project. And I’m sure that I’ll be doing the same thing.

It’s like summer vacation, when you were in elementary school. It’s like, it’s over and you have this huge, blank canvas of free time. And it feels great, but you’re gonna get bored with the swimming pool and the BB gun after a couple of weeks, most likely. And that’s when you get the paper route!

You’re a newlywed, though, right? So more family time?

Dave Schools: Well, we’ve been married about three years now. But it’s tough, because out of those three years we’ve probably spent about a year of concentrated together–time. That’s something that wasn’t present the last time I took any major time off. Obviously, I want to be a good husband, and I want to work on our yard and our gardens.

But also, living in the Bay Area there’s also a lot more opportunity to do studio work and production.

So I’m really not so worried about being institutionalized. I know that other guys in the band are definitely looking forward to spending more time with their kids, who’ll be going to college in a year. John Bell has a Wellness Center and it’s a valuable part of his life, and his wife’s life. So everybody’s got their own thing they want to do.

I imagine your fans think you guys are machines and believe you’ll keep gigging till you drop. Why did you decide to take this year off?

Dave Schools: Because it’ll keep us from dropping sooner. Everybody needs to recharge their batteries, spiritually, physically and creatively. And I think that whatever all of us do as individuals with our time off is gonna reload us with great ideas when we do re–convene. It’s more than just trying to push yourself into thinking out of the box. You’ll BE out of the box by then. A year off, you’re definitely gonna crawl out of the box.

Obviously, for you, Panic is the mothership. But why all the side projects? Is that just to keep the juices flowing?

Dave Schools: I can’t not play. And playing with other people is definitely better than playing with yourself!

I’ve listened to music all my life. Music and records and books were my best friends growing up, and I’m constantly seeking out new sounds and new ways of doing things. I want to keep evolving as an artist, and I want to do my part as one–sixth of Widespread Panic to push that evolution of the whole thing.

What has having Jimmy Herring in the band full–time done for you guys? He’s a killer guitarist. When somebody new comes in, does that take you to different places musically?

Dave Schools: Absolutely. It definitely pushes the flow of the stream into another direction. And that’s good for a band. You know, we were really lucky to get Jimmy on a number of levels. First and foremost because he’s been a family member for so long, due to his tenure with Aquarium Rescue Unit and all the shows we did together with them. And he’s a sweetheart. And he’s an excellent player. Even if you don’t know who he is, you’ve heard his name.

And so, what the excellent player brings to the picture is a learning opportunity for all of us. A new sound. And someone who really did their homework as far as the old Panic material goes. He really went to town on the books. And he knew it well enough to get to the point where he put his own spin on it.

In tandem with that was his ability to fit into the band and work in new material. And be a part of the writing process, which is basically always pretty collaborative. And that’s something that isn’t like flipping a switch. That just comes with the hang. And the hang is good.

Phil Lesh told me that the telepathy that happens between musicians is like the Wallendas walking the wire – you’re all walking the tightrope together, moving together, going on a journey together. “The wire is life,” he said. Do you know onstage where the other guys are going to go?

Dave Schools: You don’t really know where they’re gonna go, and that’s part of the fun nightly experience. But as far as reading each other’s subtle cues, body twitches, musical twitches, you can’t get that unless you get out on the tightrope, and you do it for a long time. Some people have more of a telepathic gift right off the bat. But it always has to be constantly exercised and massaged. You do that by getting out onstage every night and taking chances.

You never play the same set twice. Wouldn’t it be easier – if that’s the word – to always play a couple of fan favorites, at least, and structure them into each night’s set?

Dave Schools: There are a lot of things to take into account. And as in a highwire act, it would involve balance. And balance is the key that allows us to play something new, or very, very rare, to satisfy the most hardcore of your fans. You balance that out with something that everybody recognizes and hopes that they hear.

We would never get into the position of sort of punching the clock. If you do something like the Stones or Pink Floyd, where you have a lexicon of hits that are demanded of you, and you have such a huge production involving props and computerized lighting cues, you basically are handcuffed to a set that you play every night. That would be OK, you’re out there with a purpose, doing a spectacle.

But we’re not that kind of band, and we’ve never had a “hit,” so what that affords us is the chance to do something different every night. And that’s how we would keep from ever feeling like Aw, are we going to play “Space Wrangler” again? Not again. Really?

As it stands, we play “Space Wrangler” every four or five nights and we can breathe some life into it. Do something different with it.