The evolution of an activist

'Bidder 70' is a civil disobedience parable for our times 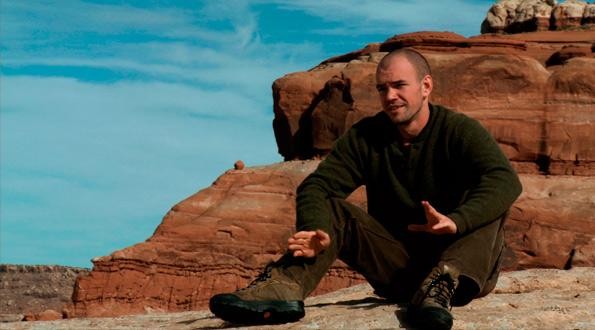 In December 2008, Utah college student Tim DeChristopher placed more than $1 million in false bids at an auction for oil and gas rights to parcels of land in some of the state’s most pristine wild areas. He never intended to purchase them, even if he had the money, which he didn’t.

DeChristopher’s act was the result of an epiphany: He’d realized, literally in the blink of an eye, that Utah’s Bureau of Land Management would destroy areas around the Arches and Canyonlands National Parks by selling the rights. He understood that the BLM action was just another link in the chain of events that would carry global climate change to its devastating conclusion.

What happened during the auction, and in the years that followed, is the subject of the documentary film Bidder 70, the Saturday night feature at this year’s Mountainfilm on Tour at the Trustees Theater.

Shortly after President Obama took office, the auction itself was declared illegal and invalidated. But the government was, by no means, through with Tim DeChristopher.

His was an act of civil disobedience, and as he awaited his inevitable trial in federal court, DeChristopher was embraced by a vast community of environmental activists, including scholars, lawmakers and even a former head of the Bureau of Land Management. He quickly learned the power of conscience, and about the ripple effect that can spread such power and connect it with similarly positive energy all over the world.

Bidder 70 is a beautifully–made film, and even if you don’t agree with Tim DeChristopher’s actions, it sends a strong message of hope to those who care and believe that change starts with just one person.

The film was made by Telluride–based Beth and George Gage, who’d made their name as Clio–winning creators of television commercials and fictional films.

Twenty years ago, the Gages gave up the pursuit of the almighty dollar to focus on real–life people and important conservation issues. Their 2009 film American Outrage documented the efforts of Utah government to take historic lands away from two Western Shoshone sisters. It won an incredible 17 film festival awards.

Beth and George Gage will attend, and speak after, Saturday’s screening of Bidder 70.

How did you find out about all this?

George Gage: In the local paper, Beth came home one day with this story about Tim DeChristopher basically disrupting this auction and saving these lands in southern Utah. Beth said “What an ingenious act to stop this exploitation on these wonderful lands.” And she said “Gee, I think this would make an interesting film, George.” On out way to the Wild & Scenic Film Festival in Nevada City, we had to find a land line to call into NPR. And as we piped into NPR, the previous person being interviewed was Tim DeChristopher. At the end of his interview they asked him what was next. And he said “Well, I’m on my way to the Wild & Scenic Film Festival.”

A lot of people wanted to do a film on him. He had just come from Sundance. I thought “This is going to be a longshot.” But at Wild & Scenic, he saw our film American Outrage, and he was impressed with the fact that three years later we were still friends with the Native American women in that film.

Making the film, then, was a matter of staying with him as everything unfolded. How far are you from his home in Salt Lake City?

Beth Gage: We’re about 350 miles from where he lives. So we made about three times the number of trips as we had planned. In the beginning, we thought this would be a short film: Well, he’s done this sort of ingenious act, and now we’ll see what’s going to happen. When the Secretary of the Interior invalidated the auction, and said that the people who were protesting were right, we thought well, they’ll probably just let him go now. But a couple of months later, they indicted him. And so we just kept following the different developments.

It sort of became the evolution of an activist. He’s a very serious and determined young man, and right from the beginning he was very honest about what he had done and why he had done it. But he was still pretty naive. He had still been looking for an environmental leader to follow, and finally figured “Well, maybe it’s got to be me.”

So the final length of the film was dictated by how long Tim’s legal journey, his story arc, turned out to be?

Beth Gage: Once he was indicted, we knew that we would carry it through to the trial, and to the either conviction or exoneration, depending on what happened. We wanted them to drop the charges, but at the same time we thought “Well, that’s not going to be a very good story ... if we follow this for two years and then they just drop the charges, how do we build the arc?”

I came away from the film having heard Tim’s message loud and clear: We’re not alone. Every person who believes in something like this is a link in a bigger chain. It’s not just a story about this guy who did something brave.

George Gage: That was our whole motivation, to inspire people, and for people to take whatever action they feel comfortable with. In other words, to make people do an action that’s more than they would normally do, because they’re inspired by this. We’re not going out and saying everyone should be arrested, or do as extreme an action as Tim did. But everyone should do something, because our planet is in major danger.

Beth Gage: American Outrage was about these elderly Native American sisters who had been treated pretty badly by the government, and continued to be. People came away from that very inspired, very sad at what had happened to these women, but there was not really an action that we could direct people to. There’s only so much you can do in certain cases. And that’s true, of course, with Tim also, but what we wanted to do is show that one person can make a difference. And that if we start joining together, being concerned about the world in which we’re living, that’s a really important thing. We’re trying to motivate people with this.

For all Mountainfilm details, see the story ‘Inspiring Audiences’ in this issue.