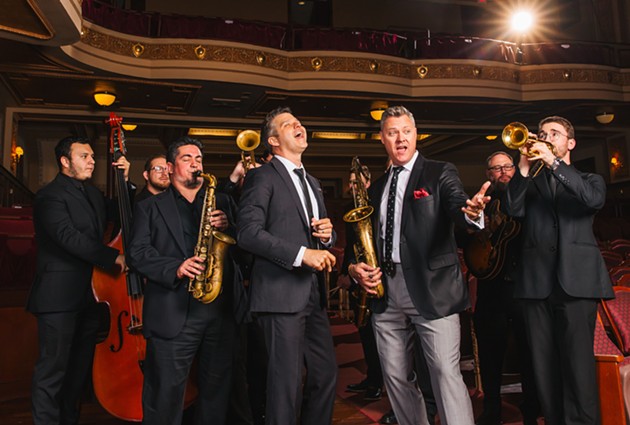 Courtesy of the Fabulous Equinox Orchestra
The Fabulous Equinox Orchestra is hosting their “Valentine’s Party Gras Movie-thon and Album Release Show” on Feb. 11.
The excitement in Jeremy Davis’s voice is evident as he bursts with information about his upcoming show. “It’s a whole lot,” he said. “It’s almost too much, to be honest with you.” But how could one limit enthusiasm when it comes from the prospect of experiencing live music again with friends at one of Savannah’s top venues? Especially when that experience brings about the fun and excitement of multiple holidays ruined by the pandemic. The Savannah-based Fabulous Equinox Orchestra intends to do just that when they perform their swing-music favorites along with new tunes live on Feb. 11 at Victory North with their “Valentine’s Party Gras Movie-thon and Album Release Show,” providing a now-rare opportunity to celebrate amongst their fans while debuting their eagerly anticipated new album, Bridge. Led by Davis and his best friend Clay Johnson, this big band is celebrating four special occasions that are close to the members’ hearts: Mardi Gras, Valentine’s Day, the release of a new film featuring their music, and the debut of their new album, which is the first in a trilogy of albums to be released in 2021. “People in Savannah know us, and we travel all over the world,” said bandleader Davis − nicknamed “The Kingpin” – who also sings and plays tenor sax. “This is just a chance for us to really reconnect with Savannah, people that we haven’t seen in a long time. And, we want people to feel comfortable, to come out and celebrate with us and just enjoy life.” The combination of all the liveliness of Mardi Gras and the romance of Valentine’s Day would already make it a big-time party, but then combining that with celebrating the movie premiere and the debut of their album make it all the most “over the top” thing the band has ever done, Davis said. “One of these alone would have been enough to sell the show, and we have four of them that are all kind of crazy,” Davis said. “You’ve got that fun New Orleans festive music, all the way to wonderful Sinatra love songs.” They will be playing new music from the album as well, Davis added, with T-shirts and CDs available at the show. Of course, the pandemic won’t take a pause for this concert, so Davis said that guests will be asked to wear a face mask and practice social distancing while the show is underway. “It’s one of those things where we’re in the middle of all this, and all we can do is be careful and respectful and gather together in a way that makes sense and just celebrate music and life,” Davis said. “So, that’s what we’re going to do, and we’d love to see all our friends and fans come out and support the show.”

“We have so much to celebrate,” Davis said. “It’s just so much fun. We’re just about as excited as can be.”

Davis said the venue has taken special precautions to allow for a safe show, and for guests to remain healthy. The venue can hold about 500 people, but for this show and for the safety of their guests, that number will be limited to about 150. Tickets will be sold for separate-table seating to allow for social distancing between different parties. The venue has also installed a new GPS air-purification system, which cycles air rapidly to keep guests safe, according to Davis. “We’ve done our best to kind of take away some of the natural hurdles one would face when you’re trying to do any sort of public gathering,” Davis said. The movie featuring the orchestra’s music is called Courting Mom and Dad. Davis said the film’s director and producer, Anna Zielinski, who went to high school with Davis and Johnson and now lives in Los Angeles, contacted Davis and requested songs to go in her film. “Over the course of four days, we wrote four songs … and she loved it,” Davis said. “It just happened that we were doing our recording session for all these tunes that we were set to record the next week, so we just added those songs to the session.” Davis said the opening and closing songs are theirs, as well as a song played during a meet-cute in the movie. “If it had worked out any other way, there is no way we would have ever pulled it together,” Davis said. “It’s a big deal.” Davis and Johnson − the voice, the trombone, and nicknamed “Mr. Showtime” − are both from Louisiana but have been based in Savannah for 15 years. The orchestra has traveled the world performing their music, and are currently scheduled to go back to Israel, Davis said. “I am truly blessed I am able to do what I love,” Davis said. The remaining albums in the trilogy are set for release later in the year: the second album, Davis said, will be Victory, to be released in April, and the third, Charade, will be available in summer. “We have so much to celebrate,” Davis said. “It’s just so much fun. We’re just about as excited as can be.” The “Valentine’s Party Gras Movie-thon and Album Release Show” begins at 7 p.m. on Feb. 11 at Victory North (2603 Whitaker St., Savannah). Visit equinoxorchestra.com for more information and tickets.