WHEN Jeremy Davis and Clay Johnson squinted into the tinsel and glow of Times Square, searching out The Iridium jazz club, they realized how far they were from the marshes of home.

In seersucker suits with smiles shining like Moon River, the childhood friends have come a long way in their musical careers. From school band beginnings to founding The Fabulous Equinox Orchestra, Davis and Johnson have entertained swing and big band lovers from Louisiana to Poland. The New York gig was a major moment.

“I was scared to death,” co-founder and vocalist Johnson confides. “We were going into the belly of the beast. All the greats have performed there. I was thinking, ‘This is the stupidest thing ever!’”

The band set up and waited for their audience to arrive.

“We went in there, and I was convinced they were going to boo us offstage,” says Johnson, a Louisiana native. “Just chew us up and eat us alive. We’re just a couple of country bumpkins. We have no business being on Broadway!” 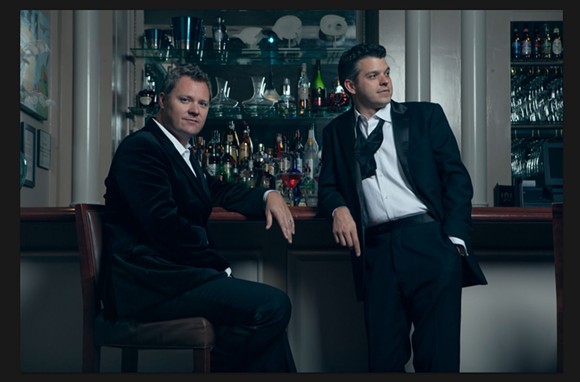 After the show, the club owner approached Davis and Johnson.

“He said, ‘I’ve been here for 11, 13 years, with music six nights a week. This is the best show we ever had in here,’” band leader, vocalist, and tenor sax player Davis quotes. “It wasn’t the best music they’ve ever had, but it was the best show. We’re going to entertain you. We’re having fun and entertaining audiences and making friends from the stage. That’s a Southern thing. People love it.”

Davis and Johnson met in the seventh grade when their mothers discovered the boys were in every class together.

“They decided we should be friends,” Johnson laughs. “It wasn’t our decision! And that was 25, 28 years ago.”

The duo have grown from their school band nerd days into charismatic leaders and big band bosses. As their Fabulous Equinox Orchestra, one of the most in-demand party bands on the East Coast, continues to blow up, the team has turned an eye on the Coastal Empire.

Davis discovered Savannah’s magic while on vacation with family.

“We just fell in love,” he gushes. “It’s different. There’s an appreciation of the arts here, there’s affluence here.”

While their home state of Louisiana has a thriving arts and music scene in hot spots like New Orleans and Lafayette, Davis was drawn to the Hostess City for its beauty and touring convenience.

“You’re four, five hours to Atlanta, and there’s just hundreds of places all the way down 95, all the way to New York,” he remarks. “We just knew it would be better for us. We started over with the whole big band here.”

Davis moved his family to Savannah the day Hurricane Katrina touched land. Johnson followed soon after, and the besties set to work planning their very first Savannah show—a concert bigger than anything they’d ever done in their home state.

“The first show we did was a Fourth of July show that sold out the Lucas Theatre,” says Davis.

“We ended it with a big, New Orleans-style street parade, leading 1,500 people from The Lucas all the way to River Street. It was the coolest thing. We knew immediately that we had found a cool place to be.” photo by Jabberpics
Enjoy the glamour of the swingin' '60s with fun, modern twists.

For people like Davis and Johnson, who have over a dozen professional jazz musicians to pay at the end of the night, Savannah provides an interesting challenge.

“It’s kind of unique in the fact that there’s no live music venues for this style of music,” says Davis. “Touring acts don’t stop here unless it’s something special. We’ve created our own thing—we’ve had to. We’re part of the scene, but there’s not a club that really focuses on jazz, the American Songbook, that kind of stuff.”

The Orchestra created its own program, Big Band Mondays, at the Westin Savannah Harbor Golf Resort & Spa. Now, they’re excited to bring the show across the river to the Historic District.

With an esteemed PBS special of their very own, a live album and DVD ready for release, and a string section to invigorate their sound, the Orchestra has a very unique evening in store on September 3.

“This show, we can firmly say, is the most ambitious thing we’ve ever done,” says Davis.

The 17-piece orchestra is joined by a small string section to create an electrifying jazz experience for the audience.

From Motown to swing to jazz to the American Songbook, the Orchestra’s program contains something for everyone. With the concert falling on Labor Day weekend, Davis and Johnson hope folks of all ages will join them for the party.

The Fabulous Equinox Orchestra exists to entertain, and the show will be all about the people viewing it. “We try to make it very punctual,” says Davis. “Lots of improvisation. The same thing happened with big bands: you think of the ‘40s, Glenn Miller. That’s a part of the history of big band. Where we live, it’s the swingin’ ‘60s, but not just that. The Rat Pack, they were just having a blast. That’s what we do. We add in anything from Ray Charles to Johnny Cash to Elvis, plus original music. Sometimes, we’ll even throw in a tune from the ‘70s or ‘80s, or a brand-new song.”

Equinox’s community-minded style isn’t limited to their live show. The band is always engaging in missionary work and community outreach. The band just returned from Poland, where they performed for patients in nursing homes, children in orphanages, and teen campers.

Proceeds from their Trustees Theater performance benefit Xcel Strategies, Inc., a Savannah-based mentoring network targeting young men between 15-25. With its mentorship team, Excel empowers youth and helps them find a sense of purpose and passion.

“It’s our big ‘thank you’ to the city of Savannah,” Johnson explains. “If Jeremy hadn’t made the decision to move his family out here 10 years ago, me and my wife would have never moved. Savannah embraced us, and we’re carrying the flag of Savannah around the world. We fell in love with the haunting beauty and stories, and we just want to say thank you to this city, and thank you for what Savannah has been for us.”