Mandolin virtuoso Mike Marshall on why he loves Savannah 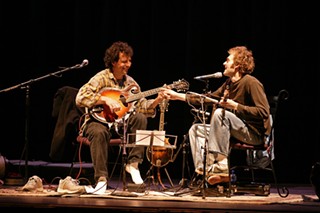 Marshall and Chris Thile. “When a kid like that bubbles up out of nowhere, word spreads right away.”

Musician, composer, teacher, mentor. Not only is Mike Marshall one of the most innovative and revered New Acoustic musicians in the world, his annual Mandolin Symposium—a summer camp in Santa Cruz, California co-produced with longtime pal David Grisman —has turned out many of the era's finest players.

Chris Thile, with whom Marshall performs March 22 at the Savannah Music Festival, attended the camp. As did rising acoustic star Sarah Jarosz.

Marshall has been a part of the SMF family since director Rob Gibson turned everything around, for the better, 11 years ago. He’s performed here with just about everyone, from Darol Anger to Bela Fleck to Edgar Meyer to Joshua Bell—and he is the driving force behind the Acoustic Music Seminar, which brings 16 young players from around the country to Savannah for a week of intense learning (and much more) on mandolin, fiddle, banjo, bass and everything else from the wide realm of acoustic instruments.

The seminar winds up with a concert, the Stringband Spectacular, April 5 at the Lucas Theatre.

We spoke with Marshall, on the road in Germany, and asked him some SMF specifics ...

“It could be, arguably, the finest festival I’ve played, hands down. Just because it plays to all of my musical interests so well, and it represents my philosophy about music. Rob Gibson and I are really aligned on that front, that there’s just music. It’s one thing. You can have a string quartet playing Mozart one night, a blues band the next, and a Brazilian band the next. I think what it does is it elevates all of the art forms, and reminds people that there is greatness in all of them. It’s what I’ve been doing for 35 years, playing so many different kinds of music and thinking about music from a global perspective. And not putting up any fence posts around any of it.”

“To have that broad and deep of a breadth of styles, and different kinds of venues where it’s appropriate for them, that’s difficult for some festivals to pull off. As cool as the festival at Telluride is, you don’t have a venue for a chamber music concert to play a string quartet to play acoustically in a beautiful church, for instance. That’s the kind of experience that you can only have in that environment. Telluride’s incredible, of course, but it’s all basically Americana, roots-based, with other things thrown in here and there. Savannah is something really spectacular, what Rob’s doing. And to have that many days, too, gives him a leg up.”

“A big part of it is this idea that we take the kids to shows every night. The whole point is to drag these kids who are mainly coming from a traditional Americana background and drag them to a string quartet, or Zakir Hussein’s percussion ensemble. Last year we saw so many great shows. To open up these kids’ minds in the course of a week like that. And then to have the artists come in and speak, after the kids have had a chance to see them play, brings this whole other level of understanding and open-mindedness to their world that I’m really proud of.”

“These kids already play great. They all have incredible technique, and they handle their instruments well. The point here is to create ensembles. We’ve got 16 students, so I can create three and four ensembles each session, working on a piece of music. One session you’ll be a leader, and the other sessions you’ll be a sideman. They have about 2 ½ hours to work up an arrangement of this piece—most of them haven’t even heard it before. It’s often an original piece. That session starts at 9 o’clock, and at noon they’ll all brought together into this big room. Each of the ensembles play for the whole group – and whoever the special guests are that day. It might be Chris Thile or Bela Fleck or Zakir Hussein sitting in front of them. After the piece gets played, the guests offer comments—usually elation and jaw-dropping. And they might suggest things to try out. By the end of the week, these kids have learned 50 tunes. And their heads are spinning, they’ve been to concerts every night, and they’ve gotten to hang out with and ask their heroes all kinds of questions.”

“He was one of the whiz kids that by age 8 or 10, he was already showing tremendous skill. He was in a band making their way to some of the festivals. So when a kid like that bubbles up out of nowhere, word spreads right away. So I knew about him before he ever knew about me. And that’s what I’m trying to do with this camp, this seminar, is to pluck these kids out from wherever they are. Often they’re in out of the way places, but you hear about them. I’m asking all the people I know on the scene who they’ve heard about a year before we pick the people. Usually the good ones are heard about way in advance, like a Sarah Jarosz. I knew her when she was 10 years old and she came to the RockyGrass Festival with her mom, and she was already playing and singing traditional tunes great.”