The golden rules of blackening

A local expert weighs in on the misunderstood culinary art

Andrew Trice is the former owner/operator of Angel's BBQ in downtown Savannah.

WHILE MANY of us are just recovering from our Thanksgiving Day feast, many others are wondering "What am I going to do with all that used fry oil?"

One answer is, that’s not one use oil you have. And it is football season.

With proper temperature management and a little straining, the oil should be good for a few more go rounds while the weather is still nice.

Hint on good homemade potato chips: In a restaurant we use a tool called a mandolin to cut the potatoes in uniform thickness. These tools are expensive and a little dangerous, but don’t worry, they sell cheaper home versions that range from “safe” to “call me Lefty.”

The side of your box grater will work too. Peeled or not, thin or kettle cut, that’s entirely up to you. What’s important is to soak the cut potatoes in cold water for at least an hour to wash away the excess starch. If you don’t take this step, the excess starch will burn before the chip gets crispy and will taste, well...burned.

You can do this a day before, hours before, or the hour before, just do it. After you fry them it’s a good idea to have a large metal bowl on hand to put them in and season them while they’re hot. You can use kosher salt, fine sea salt, or popcorn salt.

Table salt is too coarse and will make them too salty. If you want to go upscale, there are some spice shops on Broughton Street that sell some interesting choices or the fixings to mix your own creation.

Now that you’ve gotten your all from that oil, let’s talk about that gas ring. Provided you have enough propane in the tank, this gas ring will allow you to get up to restaurant BTU/temperature, unlike your home stovetop.

The other thing is, you’re outside. You don’t need an expensive hood system and you’re not going to set off your smoke alarm. This is what you need to do some real blackened fish (yes, you can do it for steak and chicken too but those need to be par cooked).

“Big deal! I can get blackened stuff all over town,” many of you will say.

Over the decades since its inception, it has been successfully corrupted from a cooking method to a seasoning. I’m very sensitive to this bastardization because it keeps being foisted on us in the BBQ world: A little BBQ rub, a little BBQ sauce and presto-chango, you’ve got BBQ. Not by a long shot!

What blackening is: The Method. Fire up your gas ring outside. Using a large cast-iron skillet, heat it on the ring for about 10 minutes so the pan has enough time to get uniformly hot, and I mean HOT!

While you’re waiting, melt some UNSALTED butter. Dredge the fish fillet in the butter so it’s coated on both sides.

I love grouper for this but any firm-fleshed fish will work that isn’t over 1/2-inch thick.

Evenly season both sides with your spice blend. Remember, this isn’t a batter; too much seasoning gives you an over-seasoned product.

Now lay the filet into the HOT pan and stand back. There is going to be a lot of smoke!

What is happening is the water in the butter has almost instantly turned to steam and the filet is floating on that bed of steam. The intense heat is browning the butter solids, toasting the spices on the fish to a rich, complex-tasting crust and steaming the filet.

By the time you’ve thought this, it’s time to carefully flip the fish and repeat. This is a rapid cooking method and can go from blackening to burning very quickly.

Another word of warning! The intense heat on the cast iron skillet will remove the cure on your pan. Don’t use your great-grandmama’s pan that has a finish like black glass and has been treated with loving reverence for over a century!

Think of it as an opportunity to go out and get a new cast-iron for your collection, a 12-inch skillet is ideal. Don’t try this with enameled cast iron or aluminum pans.

The result of a properly blackened fish filet is night and day compared to the stuff many places are calling blackened. Your filet is moist with a slight nuttiness from the caramelized butter solids and the exotic flavor of toasted spices — unlike the overcooked, dry, gritty, super salty, raw spice flavor from the “TGApple Garden” menu that’s been indifferently festooned with “blackening seasoning” from a 5 lb. plastic container labeled ACME.

Really, this is an American classic worthy of all that it entails. Not a salty,dry, over-seasoned bar food choice whose only merit is it can compete with a well bourbon and Diet Coke. 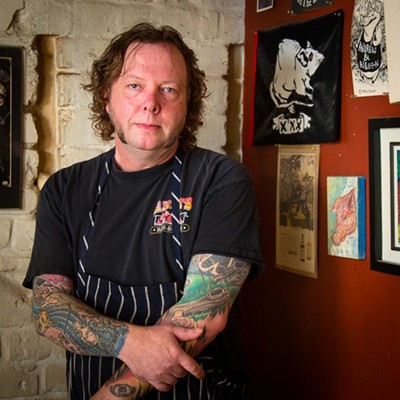