I READ social media responses to coverage of Savannah’s Global Climate Strike event, held Sept. 21 in Forsyth Park, so you don’t have to. You’re welcome!

As you might expect, the “experts” in the comments section arrived right on schedule to remind us that climate change is a hoax. I suppose it’s nice to have some things you can depend on in this world.

Not content with denying climate change, some also attacked event participants, calling them hypocrites. How many of them walked to Forsyth Park, one commenter wondered. Not many, they assumed.

Another speculated that some probably flew (yes, in airplanes) to the park. The signs carried by participants also drew ire. How many trees were sacrificed to make them? 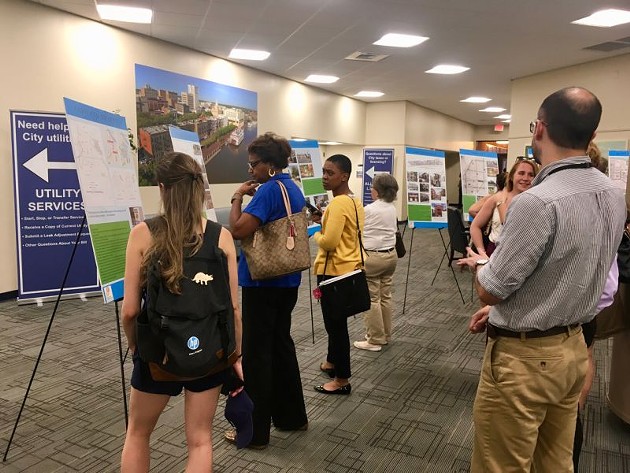 Citizens gathered at the Coastal Georgia Center Sept. 17 for a presentation on the Savannah Development and Renewal Authority’s Downtown Savannah 2033 Masterplan.

All this grumbling is intended to suggest that those who are concerned about climate change must completely divest themselves of fossil fuel use in order to be taken seriously.

These demands for climate purity are interesting in that they represent an admission that, yes, humans do cause climate change. What’s more, the very same people who chastised Climate Strikers can be relied to oppose investments in bike lanes, sidewalks, trails, and transit.

As a result, in much of Savannah it remains difficult and even dangerous to walk or ride a bike to work, school, church, and other important destinations, and to participate fully in civic life.

It’s easy to become discouraged in the face of all these bad faith arguments but I’m here to tell you 2019 is on track to be the best year for people who walk and ride bikes (and everyone else who lives in or visits Savannah) in almost a decade.

The bike lanes on Lincoln and Price street were upgraded earlier this year with green surfaces, which established our city as a leader in the state for green bike lanes.

Meanwhile, construction of the long-awaited Truman Linear Park Trail continues. When complete, it will link Lake Mayer Park with DeRenne Avenue and will serve as the first segment of the Tide to Town network.

The next phase will bring the trail north, connecting it to Police Memorial Trail.

It’s not just projects that are cause for celebration, it’s policy, too. In July the Savannah City Council adopted a new zoning ordinance, known as NewZO.

While some have suggested it’s not perfect, it’s a dramatic improvement over the ordinance it replaced and should yield gains in walkability and bikability. ‘

As I have written before, NewZO will allow Savannah to be Savannah again, or as the executive summary of the ordinance describes, “In the older parts of the City, there is a clear desire to re-embrace the area’s mixed-use, walkable roots, but the current ordinance often mandates suburban standards. Providing parking is an important goal, for example, but it can be a considerable impediment to rehabilitating and re-occupying historic buildings.”

But it’s about more than just parking.

“NewZO allows much greater areas of mixed-use development, which benefit from a greater pedestrian presence and more ‘eyes on the street.’ By emphasizing walkable/bikeable neighborhoods, it also increases safety for both drivers and pedestrians alike.”

More recently, citizens gathered at the Coastal Georgia Center last week for a presentation on the Savannah Development and Renewal Authority’s Downtown Savannah 2033 masterplan. (Disclosure: I am an SDRA board member).

The presentation received an enthusiastic response, which is remarkable since many Savannah residents suffer from what I call “chronic planning fatigue syndrome.” Symptoms including wariness of plans, especially those advanced by out-of-town consultants.

The plan was creating using mostly local talent, which probably accounts for its positive reception. During its development, five priorities were identified.

Among these is connecting the greater downtown area with the rest of the city via “active transportation” infrastructure. The rationale?

The plan is based on “community values and an understanding of time-tested and proven ideas,” such as this appraisal of transportation planning:

“A city that plans well for its citizens plans for a variety of mobility options, not just for driving. Whether it’s walking, biking, taking public transportation or driving, the goal for all citizens should be meaningful and safe options for getting around. Planning only for driving and traffic relegates all citizens to the most expensive form of transportation, and ultimately hurts the poor the most.”

Planning only for driving and traffic also makes it more likely that citizens will feel compelled to drive to events in Forsyth Park, even if they would rather walk, ride bikes, or take transit.