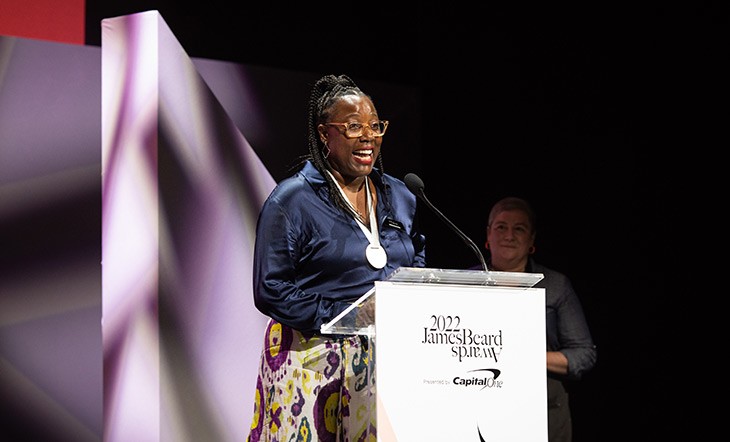 A James Beard Award is to chefs what the Oscars are to actors, and what the Grammys are to musicians. One of the most prestigious accolades in the food world, a James Beard Award recognizes restaurants and chefs for excellence in the field of culinary arts. On June 13, the James Beard Foundation announced its 2022 award-winners. And Savannah’s very own Mashama Bailey (The Grey/The Grey Market), took this year’s award for Outstanding Chef.

Known for her port city Southern cuisine, Chef Bailey has been serving thoughtful, artful dishes at The Grey since the tail end of 2014. Over the years, Bailey and her business partner, John O. Morisano, have taken the fine-dining world by storm, firmly etching an indelible spot for Savannah on the national culinary map. With numerous accolades and awards under her belt, she also received the James Beard Award for Best Chef: Southeast in 2019.

Echoing the sentiment held by many, that the culinary field hasn’t always been a place where chefs of color can thrive, Chef Bailey spoke of the significance of the award in her acceptance speech.

Bailey is a New York City native, born in the Bronx and raised in Queens. Her maternal roots hail from Waynesboro, Georgia, where she spent many summers learning to cook from the matriarchs in her family.

She attended the Institute of Culinary Education, studied in France, spent a dozen years cooking throughout New York and has traveled far and wide for food. She is also chairperson of the Edna Lewis Foundation’s Board, working to preserve and celebrate its namesake’s legacy.

“I’m here because I want to demystify Southern food,” Bailey said, when speaking of her popular online cooking classes at masterclass.com. “I want to show the limitless and rich layers of cooking Southern food through my experiences and what I’ve learned sharing meals around the world. As a Black chef in America, sharing these meals can help establish a generational continuity for a community, and I want [others] to learn that through cooking."

After winning Best Chef: Southeast in 2019, Chef Bailey told Connect Savannah: "One of the pieces of advice that I received was to make sure that you love it. I didn’t know what that meant. When I first decided to cook, I think I was very interested in it and I thought I was very capable of it. It took me until I really had to work hard to fall in love with it. So, making sure that you love it is something that you have to ask yourself. No one else can tell you that. Know your history, read, know who the chefs are, know what the competition is, learn from people. And be kind."

Reservations will, no doubt, be harder to obtain at Chef Bailey's The Grey, which is located at 109 MLK Blvd. in the now iconic renovated Greyhound bus station. To learn more visit thegreyrestaurant.com

- Chantel Britton was the key contributor to this story. Watch a video trailer for Chef Bailey's MasterClass below.