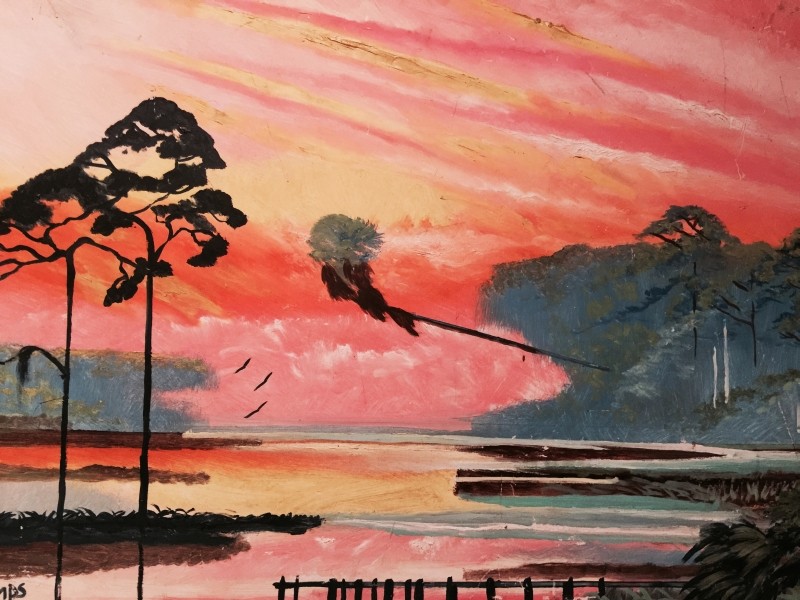 "THE HIGHWAYMEN are probably the most famous artists nobody has ever heard of," Ron Mosca says.

Mosca, a south Florida art collector, first encountered the Highwaymen on the side of the road near Fort Pierce, Florida. The year was 1976 and the group of young African-American men were carrying out the practice that earned them their name: selling $15 oil paintings out of the trunks of their cars.

The paintings were of splashy Floridian sunsets, sun-soaked beach waves, palm trees fading like dreams into the dusk – the sort of thing you see on a postcard and file away in your memory under the word “paradise”.

The Highwaymen (25 men and one woman) were active from the early 1950’s through the late ‘70s, selling their work on the side of the road, door-to-door, and sometimes outside of gas stations. Segregation and racism prevented them from exhibiting in galleries.

Today their work is highly sought-after, sells for tens of thousands of dollars, and is currently exhibited at The Beach Institute through January 2016 as an important piece of African-American history. The works come courtesy of Mosca; over half of his forty-piece collection is on display.

The twenty-one paintings at The Beach Institute demonstrate one side of the Highwaymen’s appeal: a remarkable ability to capture the idealized southern landscape. But that’s not enough to have saved them from the obscurity that swallows up so many outsider artists. It’s their unique backstory that truly sets them apart.

“They were selling their paintings for food, to live,” Mosca explains. “They were working in packing plants and citrus groves around Fort Pierce and Indian River county.”

While their mentor, A.E. Backus (a white, classically trained painter) would produce a painting every two or three months, Highwaymen artists like Alfred Hair, Willie Daniels and Sam Newton couldn’t afford to wait that long. They adopted an assembly-line strategy and were able to create ten paintings in a day. 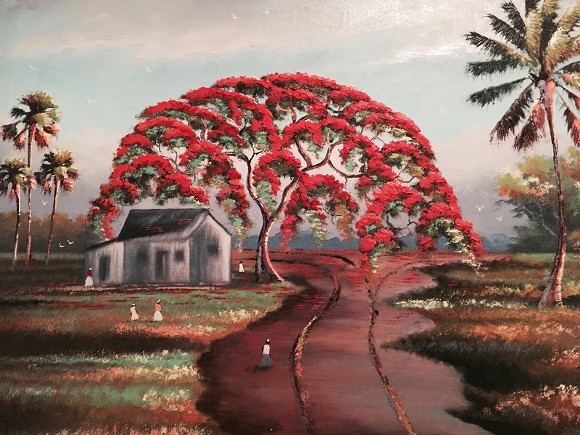 'Under the Royal Poinciana' by Willie Daniels

Occasionally the painters would compete with one another to see who could paint the fastest. Oil paint would be shared between them to save money on mixing too many colors and frames were quickly fashioned out of leftover crown molding from building sites.

The paintings would then be packed into the trunk of a car—often they were still wet—and driven up and down the eastern coast to be sold for no more than fifty dollars each.

Despite working the roads of an area notorious for its racial tumult, Mosca says the Highwaymen were always welcomed with open arms. “Their style of painting was something that everybody understood, so they had no problems when they were traveling,” he says. “Even though it was during segregation, I think that people recognized the art. It was something they could associate with.”

The group’s serene landscapes speak across generations—their work was rediscovered by Florida curator and art critic Jim Fitch in the ‘90s and has seen a resurgence in popularity since then. There’s even a documentary currently in the works about their story.

Perhaps it’s also the sheer prolificacy of the Highwaymen artists that has helped them gain the cultural recognition they’re now receiving.

Collectively, the group produced between 100,000 and 300,000 artworks during the thirty-year period in which they were primarily active. In his recent book “Highwaymen: Florida’s African-American Landscape Painters”, author Gary Monroe credits them with originating the “postcard image of Florida”, so ubiquitous was their portrait of the southern landscape.

The Florida real estate boom of the 1950s and ‘60s gave the Highwaymen a steady tourist clientele, ready to help disseminate their vision throughout the United States and Europe. Maybe that’s why you’ll recognize many of the landscapes on display at the Institute as the kind of archetypal scenes familiar to you from suburban living room walls and cushy offices.

For Darlene Wilson, executive director of The Beach Institute, the appeal of the work is simple: “They capture the pure essence of nature,” she says.

Though she recognizes the aesthetic significance of the Highwaymen paintings, it’s their cultural gravity that Wilson believes truly has an impact on the Institute. “This exhibit sheds new light on what this facility has the ability to be,” she says. “It shows people that we can display high-quality, classical art by African-American artists.”

There are several other remarkable exhibits up at the Institute currently (including a show of works on loan from the Hurn Museum), but none provoke the imagination quite like the Highwaymen do.

In any case, I believe Wilson herself offered the best recommendation you’ll get for this show: “Sometimes,” she says, “you just need something nice and beautiful to look at to take you away from reality for a few minutes.”

‘When we feel alone, art connects us’

The Roving Listeners are coming!

More »
More Art Beat of Savannah »
All Arts & Entertainment »
Comments (4)
Add a comment
Subscribe to this thread:
By Email