Tickets: $10 (includes choice of snack or candy from the concession stand) via brownpapertickets.com

BEFORE Muse Arts Warehouse is gone for good, things are gonna get a little surreal.

Psychotronic Film Society of Savannah has utilized Muse as a venue for years now, and founder Jim Reed is eager to bid farewell to the multipurpose arts space with a classic: Alejandro Jodorowsky’s 1973 masterpiece The Holy Mountain.

“The Holy Mountain is one of the very, very few truly infamous cult movies of all time,” Reed shares. “It shocked and bewildered audiences when first unveiled at the 1973 Cannes Film Fest, and later played for an amazing 16 months straight at New York City’s iconic Waverly Theatre.” 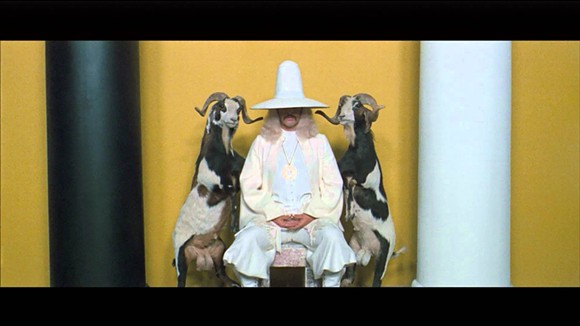 The Holy Mountain follows the mind-altering journey of an alchemist leading a Christ-like figure and seven materialistic figures, each representing a planet in the solar system, to The Holy Mountain, where all aspire to achieve enlightenment and attain immortality.

The preparation for filming The Holy Mountain is as infamous as the film itself. Before the principal photography began, Jodorowsky and his wife spent a week with no sleep, guided by a Japanese Zen master.

Jodorowsky had his primary cast members spend three months doing Zen, Sufi, and yoga exercises under the instruction of Oscar Ichazo of the Arica Institute; after the training, the group lived together in Jodorowsky’s home for a month.

Ichazo also recommended the director take LSD for spiritual exploration, and Jodorowsky administered psilocybin mushrooms to his actors during the shooting of a particularly iconic scene.

“It is an unqualified masterpiece of extremely personal filmmaking from one of the most visionary and challenging artists and spiritual figures of our time,” Reed praises. “Acolytes of Jodorowsky’s work in film, comics and the metaphysical realm find illumination and joy in his unique blend of the avant-garde and what Joseph Campbell termed ‘The Power of Myth.’ He is a true one-of-a-kind genius, and his individuality and ceaseless promotion of the notion of radical self-examination merged with an abiding fixation on the absurd and the extreme are a gift to the world.”

In years past, it’s been difficult for film buffs to get their paws on a copy. After its famed run at the Waverly Theatre, The Holy Mountain was locked in a vault and removed from circulation due to a bitter feud between Jodorowsky and the film’s distributor. Naturally, the film’s reputation and notoriety grew over those 30 years in hiding.

“All most anyone who heard of the film could find of it were a handful of still images, a brief plot synopsis and a few handfuls of reviews by critics lucky enough to have seen it,” Reed recounts.

“This was in the pre-internet days, which made it nigh on impossible to even track down such things. It took money and time and diligence to do so, which meant only hardcore, adventurous film enthusiasts and collectors such as myself would even attempt such a task.”

And attempt Reed did. About 20 years ago, he nabbed a used Laserdisc copy of the film—the only official home video release it received anywhere in the world at the time. Unfortunately, most of the nudity was censored, as was Japanese custom at the time, and the whole film boasted giant, non-removable Japanese subtitles.

“Despite those impediments, it was everything I had hoped it would be and more,” Reed shares. “It was mesmerizing, phantasmagoric, hilarious, confounding, self-indulgent, violent, grotesque, provocative, beautiful, transformative and, ultimately, unforgettable.”

Fans of the film are eager to catch the beautifully restored Holy Mountain on the big screen. If you’ve never seen it, the first viewing is unforgettable.

“I first saw it quite by accident,” Muse’s JinHi Soucy Rand recalls. “I was recovering from surgery around thirteen years ago, and was instantly mesmerized. It was unlike anything I had seen before, and there was no telling which way it would go. I kept thinking, ‘This can’t be happening,’ and ‘How did they do this? How did they get away with this?’ Which, I suppose, are all unusual things to say about a film that is ultimately kind of funny and sweet. It may have been my fevered state, but I immediately became obsessed with Jodorowsky, I watched his first three films in this order: The Holy Mountain, Fando et Lis, and then El Topo. All backwards and out of order of production, really. But by doing that I felt that I could see more clearly one artists take on the maturing and vulnerabilities of a man at different ages in his life. I would recommend seeing them and his films since in order.”

She thinks the film is a perfect cinematic farewell to Muse.

“I think Jim Reed knew this would be a film that I would be thrilled to have shared on our big screen,” she says. “There really are some impossibly beautiful shots. Jim and I have become great friends over the years, and I am a strong supporter and happy member of The Psychotronic Film Society of Savannah led by Jim. One of the first things I said to him when we started hanging out is, ‘Are you familiar with Alejandro Jodorowsky’s The Holy Mountain?’ It may have been one of the initial and lasting things that click with us.”

When Rand acquired the Muse space, she knew she wanted to screen unusual, hard-to-come-by films. She immediately called Reed in to create a screening space and show indie films and rare picks.

“I would not have been able to bring so many wonderful and important motion pictures to town for special, exclusive engagements were it not for that support, encouragement and co-sponsorship,” Reed says.

“Knowing this would be the final film shown in that space, I wanted to not only present something I thought folks would really appreciate having the chance to experience, but something that would also hold personal resonance with myself and Muse’s indefatigable leader JinHi. I wanted to ‘go out with a bang,’ so to speak—and what better way to do that than with one of the greatest examples of both psychedelic and psychotronic cinema ever made?”