The horror... the horror 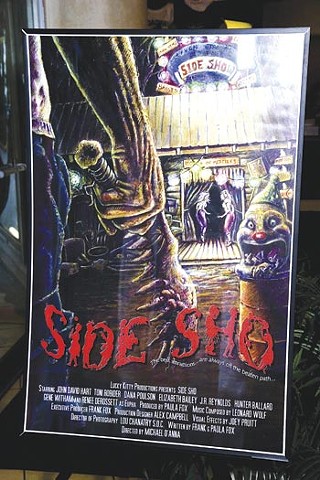 A cynic might say that if a low-budget, straight-to-DVD slasher flick is the best Savannah could do over the past few years to attract the film industry, we’re in pretty sad shape.

And Side Sho -- filmed mostly in Walthourville but relying on a Savannah-centric cast and crew -- is indeed that: a low-budget ($500,000), straight-to-DVD (by plan) slasher flick (lots of slashing going on).

But in this sterile era of all-CGI all-the-time, I have to say it’s refreshing -- if anything this gore-splattered could be called refreshing -- to see a film that’s A) not a sequel, B) not outsourced to an effects lab, and C) not about frickin’ penguins.

Make no mistake, despite its frequent forays into camp, Side Sho is first and foremost a good old-fashioned genre film: Minivan full of travelers finds itself in the rural South, minivan breaks down, travelers find themselves in deep doo-doo, etc.

As evidenced by an almost-final cut of the film at last week’s local premiere at the Savannah Theatre, writer/producer Frank Fox delves deep into the compendium of horror film cliches for this one:

• Much running of said babes through dark forest while screaming, check;

• Death by device run by two-stroke internal combustion engine, in this case a boat propeller, check;

• And chilling, charismatic villain that you secretly root for (the Side Sho barker played by local actor J.R. Reynolds), check.

Indeed, the only slasher flick cliche missing is the black guy who gets killed in the first 20 minutes. Otherwise, it’s all here.

While the script won’t win any Best Screenplay awards anytime soon, I have to say this is one of the best-storyboarded and best-shot half-million dollar films you’ll see. For this credit must go both to director Mike D’Anna and director of photography Lou Chanatry, D.P. on Frankenfish. The camera work is active but not distracting, inventive but not gimmicky.

While at times the lighting is too clever by half -- are so many characters shot in deep shadow to enhance suspense or because their makeup isn’t HD-ready? -- still, you have to say that for its low budget, this is an exceptionally well-shot and well-edited film.

Side Sho is in a sense one filmmaker’s ode to analog. No computer effects are used, so if you pay attention you can spot the point at which the film was edited to introduce a gory effect. This will either annoy the crap out of you or bring a smile to your face in memory of how all filmmakers had to practice their craft in the pre-PC age.

If there’s one serious complaint I have, it’s the sound. The levels vary wildly, with half the dialogue muffled and the other half harshly overdriven. Either way, it’s a major distraction, and I hope the rumor’s true that D’Anna is taking Side Sho through one last run of post-production to tweak it.

Savannah residents will take delight in the performances of several locals, including the previously mentioned Reynolds, the always-engaging Renee DeRossette (who also did some animal wrangling on the film), and Gene Witham, who turns in a savvy performance as Reynolds’ hilariously disgruntled henchman.

Other talents of note include the perfectly cast John David Hart as the Dorky Dad. His daughter is played by Toni Robider, bikini model and one-time Hooters girl who transcends her role as eye-candy to show a real talent for cinematic acting. And Hunter Ballard displays a remarkable onscreen calm as the young son.

For more info go to

Speaking of Side Sho