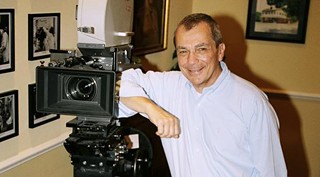 Last week, when the bronze statue of Savannah boy–done–good Johnny Mercer was unveiled, everyone who’s anyone was there. Except, that is, for Stratton Leopold, another of the city’s great success stories.

And boy, was he miffed that he could not attend.

But Leopold, the eldest son in Savannah’s ice cream–making family, was busy in California with his other job: Producing Universal Pictures’ upcoming big–budget Wolfman re–make. And planning the next Marvel Pictures superhero blockbuster, Captain America.

For more than 30 years, Leopold has led something of a double life. Although he makes his home in Savannah, and delights in doling out sundaes at the family business, he’s also a Hollywood player. His producing credits include, among others, Mission: Impossible III, The General’s Daughter, Paycheck and The Sum of All Fears.

It all started with Johnny Mercer, who was a family friend.

“I first met Johnny was I was 10,” Leopold says. “I saw him, of course, after that quite a bit. When he came to Savannah, he would generally get his niece Nancy and they’d make a beeline for the store. He’d see my dad, and they’d have ice cream and talk.”

What would they talk about? “Savannah, of course,” Leopold says.

“Johnny grew up a block away from us. He was on Gwinnett and Lincoln, and we were on Gwinnett and Habersham. Nancy and I have known each other our entire lives. My mother used to appreciate the fact that Nancy would walk with me to Greek School, to make sure I went there.”

Between his regular excursions between Los Angeles, where he was writing for the movies, and the exotic, far–flung corners of the globe, Mercer returned often to his hometown – and to Leopold’s Ice Cream.

“That store had booths – and there was a deuce, a small booth between the front room and the back room, which was his favorite. He would sit there and people–watch a lot.”

The great songwriter’s favorite flavor was tutti–frutti. And in Savannah, there was no one who tutti’d up the fruiti better than Peter Leopold, a Greek immigrant who’d opened the shop with his brothers Basil and George in 1919, and who made the ice cream himself from “secret” family recipes.

According to Leopold family legend, Mercer had even done a bit of behind–the–counter scooping himself, as a teenager.

He was, says Leopold, “just a down to earth man. When I was 10, he seemed like he was 10 feet tall. I knew from my dad that he was famous and that he was from Hollywood, but he was a very pleasant and wonderful man. Even later on.”

Peter Leopold passed away in 1963, preceded by his brother George. Basil ran the family’s second store in the Medical Arts Building, while Stratton held down the fort at his dad’s place. Mercer, older, wiser and a lot more famous, still dropped by when he was in town.

As a young man with big dreams, however, Stratton closed Leopold’s in 1969. After discovering that medical school wasn’t his cup of mint chocolate chip, he took a job with the Loew’s Corporation in New York City, and began to learn about the movie business.

And he was hooked.

“I started setting goals for myself,” he recalls, “thinking ‘I want to produce movies. So how do I do that?’ I started learning as much as I could, meeting people up there, and after that I moved to Atlanta, which was just starting to get going in the movie business.”

He had no interest in directing, and even though he (with Nancy) had done a little acting with the Little Theatre of Savannah, he wasn’t angling for stardom. He enjoyed the behind–the–scenes, nuts–and–bolts work of a producer.

He started out doing whatever jobs were asked of him, and moved up the movie–making food chain from there. Juliet Taylor, who later went on to become one of Hollywood’s most successful casting directors, was an early friend. She helped him stumble through his first professional job, casting locals for the 1975 TV movie Judge Horton and the Scottsboro Boys.

The first film Leopold produced was the low–budget horror non–classic Dead as a Doorman, aka The Doorman, aka Too Scared to Scream. The writer, director and editor were all the same person: Gary Youngman, the son of comedian Henny Youngman.

“I was the producer, production manager, first assistant director, location manager, and anything else,” Leopold laughs.

Doorman marked the first film appearance of actor Bradley Whitford, later an Emmy winner for his work on The West Wing.

After 10 years in Atlanta, networking and learning the ropes, Leopold was beginning to think of himself as successful.

“I started working a lot in the southeast,” he says, “and a friend who had access to studio heads said ‘You’re good at this. You’ve got to move to L.A.’

“I said ‘No, I’m happy here.’ I avoided it for years, because I was working as much as I wanted. Everything was great.”

Eventually, though, he began to crave the “next level.” So off to California he went. His first west coast producer credit was Terry Gilliam’s The Adventures of Baron Munchausen, filmed in Spain and Italy.

In 1991 Leopold met Mary Poulos at a party in Los Angeles. Like him, she came from a Greek family, and it turned out she was also a Savannah native, although they’d never met.

Stratton and Mary were married in 1996, and almost immediately moved back to Savannah together.

He continued to work as a freelance producer, jetting between the coasts, and at one point was Paramount Pictures’ executive vice president of production.

But the past kept calling.

“Every time I’d go to Savannah – when my mom was alive, especially – people would recognize me and stop me and say ”We miss the ice cream so much.’ Ultimately I just said ‘Let’s do it,’“ he says. ”So I took a year off and we did.”

There are movie posters, props, equipment and signed photos hanging from every wall – nods to Stratton Leopold’s “other” job.

“The store is an homage to my father,” Leopold explains. “He worked his tail off. I’d saved everything – the soda fountain and the back bar and the phone booth – because I’m a pack rat. And in the back of my mind, I knew I was going to do something with it. I just didn’t know when.”