The Impossible Dream comes to Asbury

General admission is $20, or $15 seniors 65+. Tickets can be purchased at the door or online at www.asburymemorial.org/theatre/.

MARKING 55 years since its Broadway debut, the perennial favorite Man of La Mancha will again be performed on a local stage — this time by the musical mavens at Asbury Memorial Church Theatre Company, who are back with a new show after a two-year break.

Famous for its high-quality shows and pro-level singing and acting talent in the congregation, Asbury’s version of the popular show will be directed by local theatre veteran Travis Spangenburg.

“The folks at Asbury laid out a few different options for shows when they were searching for directors. As soon as I started looking into Man of La Mancha, I was hooked,” Spangenburg tells us.

“What really got me excited was the reaction of so many people in the local theatre community when I said I was interested in directing it. Several of them were almost shaking with excitement when I told them!” 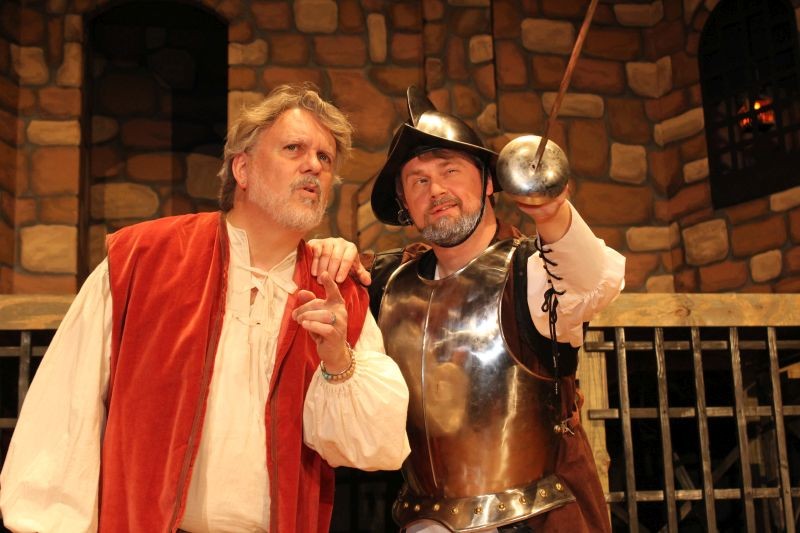 While its signature tune, “The Impossible Dream” is one of the most recognizable songs ever written, Spangenburg is quick to say that “all the songs move the plot forward.”

The plot itself is interesting, and tends to be overlooked: Almost all the action takes place during a mock trial in a prison during the Spanish Inquisition.

Playwright Dale Wasserman settled on the plot device knowing full well that many adaptations of the tale of Don Quixote had failed. Based on a previous TV script he’d written, Man of La Mancha is a fanciful embellishment, not intended to portray either Cervantes’ life nor the story he immortalized in Don Quixote.

For Spangenburg, one secret of Man of La Mancha’s more than half-century of success is that “It has an overwhelming sense of optimism, one that’s especially welcome right now. It’s easy to let go of optimism sometimes, especially when it’s not cool to be hopeful about anything, when cynicism is in. But Cervantes, by way of Don Quixote, lets us know that you can always have hope.”

Interestingly, this is Spangenburg’s first-ever directorial gig on a musical.

“I was a bit petrified at first!” he admits. “But when I was slated to do it, I’d already had the chance to meet with some of my director friends about it. And all the folks at Asbury are such a wonderful support system, from our musical director Warren Heilman to Cheri Hester, and of course Ray Ellis, who plays our Sancho.”

Having so much support on the music end, Spangenburg says, “has enabled me to focus more on the storytelling aspect, which is really what I’m best at anyway.”

As Cervantes/Quixote, Spangenburg cast Justin Kent, who some will remember from his role as Banquo in Savannah Shakes’ recent production of Macbeth.

“Justin Kent brings so much comic energy to the stage. He just oozes funniness so naturally. He’s so easy for audiences to like,” Spangenburge says.

“And you have to like Quixote. He’s a bit crazy, but you still believe in him. Justin has us laughing constantly during rehearsal, even at things we’ve already heard dozens of times.”

Of local theatre legend Ray Ellis, playing Sancho Panza, Spangenburg says “His ability to take a role and constantly work to improve on it is a gift.”

The question the production team faced in this production was, “Do you go all out with a full costume show, or really go with the plot device of it being a play within a play?” according to Spangenburg.

“To me, the whole thing screams like it’s a show being done out of a trunk. So we tried to keep the focus on the prisoners.”

For Spangenburg, there was a personal reason.

“I once did a playwright’s workshop in Kentucky, that was literally in a prison, for the prisoners to participate in,” he says. “I got to see firsthand the power of theatre and storytelling. Inmates used it to confront what they’d done, or how they’d affected their families, things like that. They found hope to heal in some way.”

As a director, what Spangenburg like about musicals is, interestingly enough, one of the things he likes about Shakespeare.

“There’s not a lot of subtext. The characters tell you what they’re thinking, and in the case of Man of La Mancha, it all goes along with the music. The characters never lie to you.”