The Jinx: 10 years and counting

American Aquarium, Murder By Death to play for the party 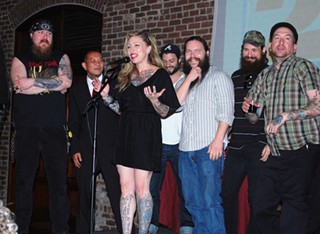 Susanne Warnekros and the Jinx staff at a Connect "Best of Savannah" event. The club wins, in several categories, pretty much every year

How time flies when you're having fun.

October 10 marks an even decade since the Jinx rose from the ashes of the semi-legendary Congress Street nightclub known in the day as Velvet Elvis. "I just didn't want Savannah to lose that spot," said Susanne Guest Warnekros, a hardcore music fan who was working as a tattoo artist in 2003, when she took over the lease and changed the name to the Jinx.

"We have such a huge music and art scene here, I wanted those people to have a comfortable place to go, that they felt good about."

The great Ellis Square location — in the center, literally, of everything — has doubtless played a role in the Jinx's ongoing success as one of Savannah's longest-lived and best-attended music bars.

More than that, though, is the all-inclusive vibe that's been there since Day One. A lot of metal bands have thundered on Warnekros' stage (let's not forget that Baroness, Kylesa and Black Tusk more or less started at the Jinx), there are happening DJ dance nights and boozy Karaoke events. And Tuesday, Hip Hop Night, has been a steady favorite for a few years now.

And the monstrously good Raleigh Americana band American Aquarium, whose most recent album was produced by none other than Jason Isbell, always plays the Jinx when it's coming-to-Savannah time. Singer, songwriter and guitarist B.J. Barham wouldn't have it any other way.

The band co-headlines the club's 10th anniversary show Thursday (that's right, celebrating 10 years on 10-10. It doesn't get much more auspicious than that).

Warnekros is proud that, after 10 years, the Jinx is still booked entirely in-house. She knows her audience because she IS her audience.

"I don't think people really realize how demanding it is to be in charge of the party six nights a week," she said. "But as far as doing it differently? I probably wouldn't."

Roy Swindelle has five stringed instruments made from cigar boxes at home. As of three weeks ago, he only has one kidney, too – but the medical issues have happily all been resolved, so let’s turn our attention to what this beloved local legend is up to with those cardboard stogie-holders.

This is the third annual such event – the previous shows took place outdoors at the Ships of the Sea Museum, but this year, the timing couldn’t be worked out. Dub’s stepped in, and the proceeds will be donated to the museum for the benefit of its ongoing music programming.

Swindelle’s got a three-string CB guitar, a four-string ukulele, a four-string bass (with a wooden box for a body), a one-string (!) something-or-other and a Turkish autoharp called a saz.

“One on level,” he says, “a cigar box instrument is very simple to play – you don’t have to be a guitar player.”

Swindelle, however, is a guitar player – and a damn good one – and although he found playing primitive instruments something of a challenge, he was open to it. “As a musician, the clue to learning any new instrument is to just make up a song,” he says. “Then you go ‘Hey look, I can play this!’ That’s what I did with this ukulele thing last year. I just wrote a song.”

The instruments were all made, from kits, by Ships of the Sea director Tony Pizzo.

“I think I’ve become the test cigar box dummy for these things,” Swindelle laughs. The idea behind the concerts, he believes, is “just to show people that it isn’t all just blues. There’s all different types of things you can do.”

It’s rootsy, it’s unusual, and in the right hands, it’s a glorious mechanism for making music.

“They make one with six strings,” Swindelle points out, “and I’m thinking ‘Well, that’s just a guitar now.’

“But I will say this – and Georgia Kyle will swear on a stack of bibles – you can sit there and play guitar all night long, but when you whip this out, all of a sudden people are excited and interested – ‘ooh, look at that, look at that.’ I guess because it’s different.”