The lessons of ‘tactical urbanism’

A complete schedule and more information is available at sdra.net.

"EVERY CITY thinks it has a parking problem. Or a traffic problem," Tony Garcia told attendees in his presentation at the Georgia Walks Summit in Rome last week.

His response to civic leaders who make these claims might surprise them: “You don’t. You have a car problem.”

This involves a “city, organizational, and/or citizen-led approach to neighborhood building using short-term, low-cost, and scalable interventions.” Creating a pop-up park with picnic tables in the middle of a parking lot or demonstrating a protected bike lane by using traffic cones and temporary paint are examples.

Perhaps the most famous tactical urbanism project was the 2009 deployment of 376 lawn chairs in New York’s Time Square, which led to the establishment of a permanent pedestrian zone.

Tactical urbanism, according to Garcia, creates wider public engagement, expedites the delivery of a public benefit, and allows people to see what alternatives look like. The approach permits cities to experiment with ideas before committing to infrastructure changes.

Garcia said cities must understand that they must make adjustments and follow-ups as the effects of the project are documented.

Most importantly, they should expect for things to go wrong. However, when cities “test before they invest,” they can avoid making bad ideas permanent.

For instance, a city might temporarily close a lane of traffic on a street to evaluate whether the change will improve pedestrian safety, provide additional parking, and make the street more visually appealing. By experimenting with temporary measures and making changes as they go, city officials could determine if a permanent lane reduction is feasible. 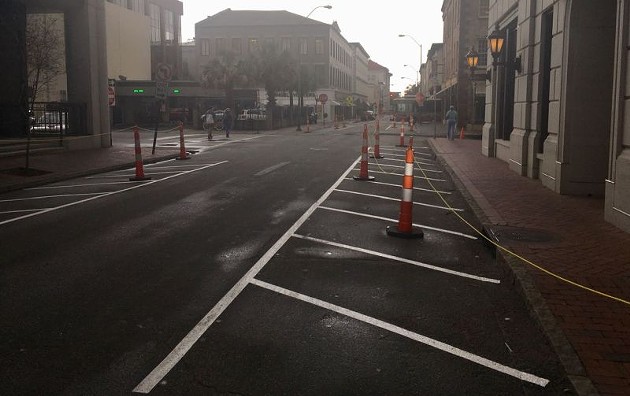 The Whitaker Street Pilot and similar temporary demonstration projects provide an opportunity to "test before we invest" in infrastructure changes.

If this example sounds familiar, that’s because it describes the Whitaker Street Pilot Project between Bay and Broughton streets. For using this prudent and practical approach, city officials have been called morons, idiots, incompetents and worse on Facebook.

When the public does not understand this process — which Garcia explains with three words: build, measure, learn — it’s easy for projects to be derailed. That’s why public engagement is critical.

Officials must make sure citizens “know about it before they see the flyer,” or in this case, the Facebook posts. And they must go beyond traditional methods of communicating with the public about projects.

“Ten people in a cafeteria at 6 p.m. is not public engagement,” Garcia said “It’s checking a box to say you did something.”

Savannahians got a taste of a more meaningful form of engagement earlier this month, when the Congress for the New Urbanism sponsored two “Legacy Project” events intended to “empower local leaders, advocates, and residents to implement New Urbanist principles and build places where people and businesses can thrive and prosper.”

Citizens were invited not just to final presentations, in which planners unveiled visions for East Savannah and the Southside, but to visit with the teams creating the plans as they were creating them.

Architects, urban planners, and other professionals worked at folding tables set up at the W.W. Law Center on East Bolton Street and the Crusader Center off Coffee Bluff Road, so the public could see and participate in the process.

Residents will have access to an another immersive experience, March 21-26 as the Savannah Development and Renewal Authority is leading an effort called Downtown Savannah 2033. (Disclosure: I am chair of the SDRA Board of Directors).

In 2011, the City of Savannah adopted portions of a Downtown Master Plan, the first cohesive vision of the downtown’s future since Gen. Oglethorpe laid out the squares in 1733. SDRA is updating that 20-year plan, which expands the boundaries of Savannah’s downtown growth potential and accounts for the effect on its people.

Through a series of public design charrettes, citizens may drop in to review what has been done in the past, share potential ideas, review maps, and ask questions. The sessions are being held at the former New Covenant Methodist Church at 2201 Bull St.

The goal is to gather input from “every corner of the community” about “what should (or should not) be part of the Savannah of tomorrow. The more citizens that participate, the stronger the outcome.”