The livin’ is easy at bô biên hut 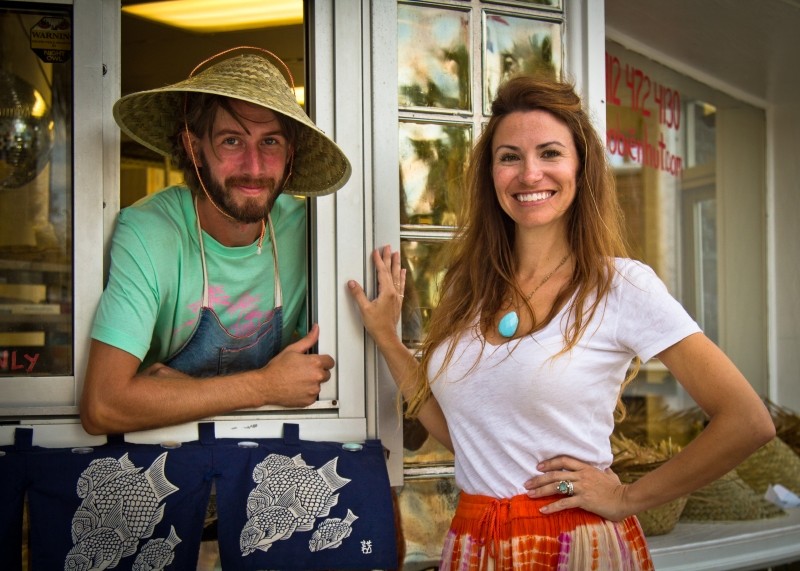 They changed up the beach food game in 2010 with the casual and classy Tybee Island Social Club, and their fine dining sanctuary, Fish Camp, continues to entice foodies from far and wide since it opened last year.

Last week brought the “silent open” of their latest island venture, bÒ biên hut, and while the pressure of a third kitchen might diminish another restauranteur’s summer glow, Sarah and Kurtis appeared as tanned and relaxed as ever.

“Everything’s going really smoothly so far,” reported Sarah cheerfully as she arranged menus and grass mats outside the sliding glass order window. “It’s just been word of mouth, and we’ve had customers walking up all day.”

bÒ biên hut offers outdoor seating, take out and eventually on-island delivery, but this is the Schumms, so don’t expect fried fish fingers to go. The name is a nod to the couple’s adoration of culture and travel: bÒ biên (pronounced “boh bee EN”) means “beach” in Vietnamese, and the new venue embodies a whole different kind of coastal vibe—and taste. 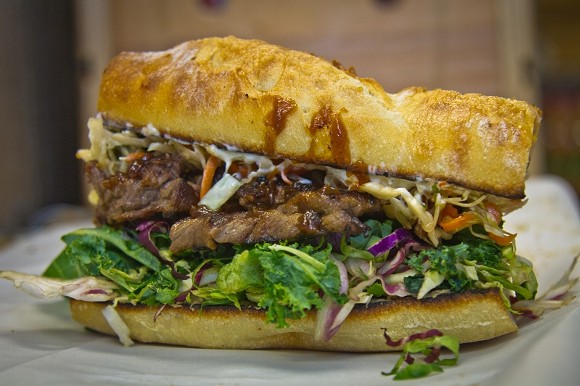 “We’ve always wanted to do an Asian spot, and this was the perfect place to do it,” said Kurtis of the quirky, glass-bricked building at the south end of the island, caddy corner from Tybrisa's beach shops.

“We’ve let the buildings dictate the menus and worked backwards from there,” he continued, explaining that Fish Camp was first conceived as their Asian fusion dream, but it became clear that the charming cabin under the pines would make a better high-end seafood restaurant.

“We didn’t necessarily want a third restaurant, but this fell into our laps.”

Locals may remember a greasy Chinese joint that once served deep fried fare from these same windows, but any kind of Asian food, let alone scratch-made ramen and pillowy pork dumplings, has been absent from Tybee for a long time.

Now the Schumms have finally filled the void with inexpensive, easy-to-eat snacks and entrées. It’s a simple concept with complex flavors: Finger foods include freshly-steamed edamame tossed in Thai chili oil and sea salt ($4), perfectly crispy coconut shrimp ($6 and gluten-free), and tasty barbecued skewers ($6) of all stripes (chicken and pineapple for the kids, octopus and jalapeño for the grown-up palates!)

Traditional dishes require chopsticks (or a fork) but they’re worth it: Kurtis’ version of fried rice may look typical with its cubed carrots and peas, but miso brown butter turns this cardboard box into a savory carnival ($8).

Vegetarians will find plenty to peruse, particularly the cold and crunchy ginger salad ($6 and chock full of baby greens) and the mapo doufo, comprised of seasoned tofu seared and tossed in black bean paste, Szechuan peppercorns, pickled mushrooms and cabbage ($10).

An outrageously delicious standout is the banh mi sandwich, a soft baguette piled with grilled meat, roasted red pepper and slaw and served with a potato skewer in lieu of a side of fries ($10.)

It’s still too dang hot around here to even think about soup, but a sip of the meticulously prepared pho (“ask a hipster how to pronounce it” advises the menu) proves that the Schumms’ easygoing demeanor stops at the kitchen door. While bÒ biên hut is just steps from the bustle of the Tybee Pier, if you close your eyes and take a few bites, you might swear you just stepped off the beach in Nha Trang.

“I think this is really different than anything that’s been done on Tybee,” nodded Kurtis.

“We’ve really put a lot of effort in the recipes.”