At first listen of Hash Redactor’s Drecksound, the Memphis band's first LP that was released in April, one thing is clear—this is a band that doesn't hang on to the traditions of punk. Sure, the record is undeniably influenced by 70s punk like The Stooges and even early 80s post-punk, but it also delves into musical and sonic territory that recalls early garage bands like The Sonics. They also play around with melody and arrangement; all of this comes together to create a record that is lo-fi in the best way, captivating, and layered in dense intensity.

The band has been touring steadily since Drecksound was released, and they’re set for a stop at El Rocko Lounge on Tues., July 30 alongside Valley Gals, Pearl & the Oysters, and Dirtbike. Ahead of the gig, we spoke to the band’s Alec McIntyre about everything from recording to tape to the Memphis DIY community. 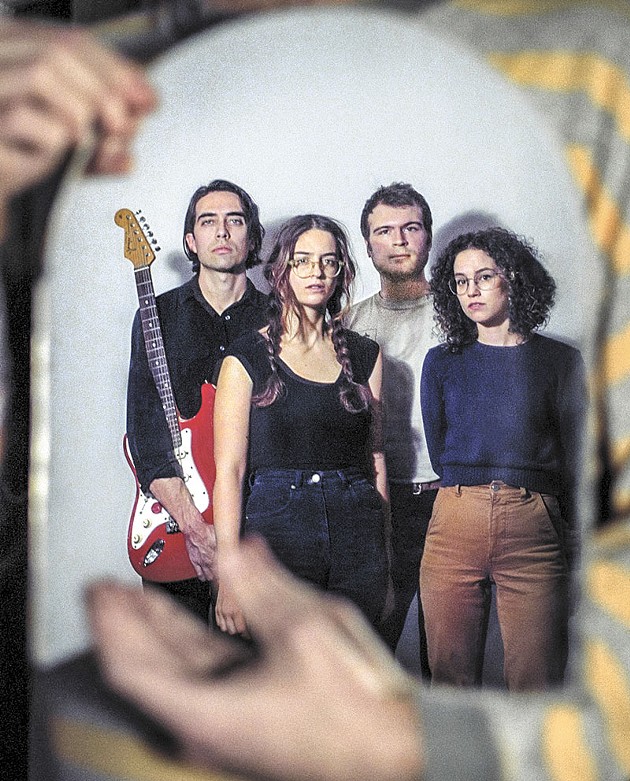 You guys were all in different bands prior to coming together. How did you get together?

McIntyre: This initially started out as kind of just an in town project with me and Meredith [Lones], our bass player. We live together, and it was more of a natural thing. It started as that. We’ve all known each other for probably about 10 years, just being in the Memphis DIY scene. Playing in each other’s bands, playing shows, all of that kind of stuff.

George [Williford] was available, so we asked him to join. And then our initial drummer quit for personal reasons, so Charlotte [Watson] asked to join the band after that. So we’ve been kind of keeping it rolling; writing songs together, but not really with any intention other than to make music for ourselves.

You mentioned the DIY scene in Memphis. What’s that like? Are there a lot of bands in your wheelhouse?

McIntyre: There’s a lot of tumbleweeds in the DIY scene [laughs]. There are people who are still fighting the good fight, but it’s one of those towns where if you go out to a show and see out of town bands coming in that are at all interesting, nine out of 10 people in the crowd are in bands. There’s not a lot of an audience for the kind of stuff that we do. We try to bring our friends through, and bands that we want to see in town, but there isn’t exactly a thriving scene.

There are lots of people who are doing good things, but there are generally just very few people. People leave Memphis, generally, as soon as they get a chance, you know?

It’s funny you say that, because it’s similar in the town where I grew up. The motivation for bands to tour was in part because our hometown didn’t offer much past a certain point. Was that part of the impetus for you guys to start going on the road—to go out and find your people?

McIntyre: Yeah, I suppose so. Touring is nice because you can go find your people for a brief moment and then hide back under a rock. Our people are generally freaks and weirdos [laughs]. Memphis is a good place for us, personally. It’s definitely not suited for everybody.

It’s a good home base!

McIntyre: Yeah! And it helps being in the middle of the country. We’re not stuck on one side, so it’s not impossible to get to the west coast. And doing an east coast run like we’re doing this time around is completely manageable.

Do you feel like you guys knew what kind of band you wanted to be stylistically from day one?

McIntyre: It definitely evolved, because we changed members. My initial idea for it was going to be more of a rambling, fried out kind of Meat Puppets thing. We couldn’t play that, so we just kind of wound up finding our common ground. There are certainly influences that we draw on, just to center it. We obviously listen to a lot of English post punk stuff and a lot of American DIY, but I don’t think we’re trying to do any one thing.

McIntyre: We certainly have our heroes. We’re all big Rowland S. Howard fans. I listen to his records way more often than I listen to one particular Birthday Party release, but yeah—it’s all within that continuum.

Tell me about recording the new record to tape.

McIntyre: Well, mainly we did it on tape because that’s the only way that we know how to record [laughs]. We’re all pretty terrible technical luddites! Computers make no fucking sense to me, and that was not a language that I was going to try and become versed in. It was just easier. A friend of ours had a tape machine, and we all figured it out.

Ultimately though, we did have to kind of reply on some digital help. We did have to rely on some digital help. We recorded it all at home, in our practice space. And while that was all fine and good, when the tape starts to disintegrate things get a little scary. So we had to enlist the help of our friend Matt Qualls, who mixed the record, to dump everything down to Pro Tools and basically rescue the audio there.

The reason it sounds good is because he saved our asses! [laughs].

Do you like the challenge of recording to tape and having boundaries on the amount of takes you could do, etc.?

McIntyre: Sure! I mean, it has its ups and downs. We’re not analog snobs—I’d like to think that we wouldn’t have turned this into a prog rock album if we’d done it all in Pro Tools. I think we exercised enough taste on our own. But who knows, we might wind up doing our next record all digitally if it’s more convenient and seems safer. Rather than having the tape machine blow up while we’re trying to finish it.