The Love Cats’ lovesong for The Cure

The Love Cats are a group of local musicians with a shared love for The Cure, one of the most successful bands of the 80s and 90s. The celebrated band, who’s currently experiencing a bit of a renaissance, hasn’t yielded many tribute or cover acts despite their popularity—until now, that is.

The Love Cats are a fairly new venture, but the talented group has garnered some buzz so far for their renderings of classic Cure songs. They’ll be hosting a special Dead Man’s Party at El Rocko Lounge on June 8, featuring prizes, costumes, and a packed lineup of bands. Ahead of the gig, we spoke to vocalist Jacob Tatom and guitarist James Chapman. 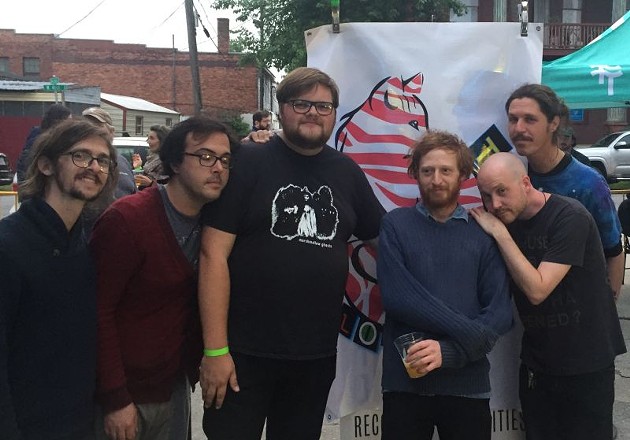 Tell me the story of how this band started.

Tatom: When our other guitarist, Eric, moved here we met him and it was kind of his brainchild.

Chapman: He and I were trying to figure out a way to play music together, but neither of us had really written any songs. We both wanted to do a cover band for a while, and we kind of struck upon The Cure as a band that has a ton of amazing songs and a lot to draw from. They were a band we loved.

Tatom: With very little diminished popularity. I mean, they’re still as relevant as ever.

Chapman: So Eric and I were talking and said, “Who can we get to sing for this thing?” Jacob and I had been singing karaoke together for years, so I said, “Well, probably the best 80s gothy karaoke guy around to be the singer.”

And then it snowballed into having a six-piece band. We recruited the rhythm section from one of our favorite bands here, Hot Plate. It’s been a really good experience of getting a large band together and rehearsing some really great songs.

You also picked a band that pretty much guarantees you’ll get cool gigs no matter what, rather than being a top 40 cover band that plays tequila bars. Was there any strategy to that? That it had to be something you genuinely loved?

Tatom: Yeah, I think that was talked about.

Chapman: We’ve talked about covering other artists at some point, but it would all be in that same vein. We all kind of come from that sound and style. But none of us are too good at planning any business side of things [laughs]. The El Rocko show is really about planning a party for all the weird kids to come to and have a good time.

What was the process like of figuring out what songs you wanted to do?

Tatom: Mostly by going through the hits first, finding which ones we liked, and then finding which ones more people would be familiar with. But also not doing certain obvious ones yet to keep it surprising. But we’ve talked about going back and doing deeper cuts once we’ve done this long enough.

The amazing thing about The Cure is their song structures are very unconventional—long intros, lots of competing lines and parts layered on top of each other. How seriously do you take the recorded arrangements? Do you stay faithful, or do you leave room to shorten or lengthen intros, etc.?

Chapman: It’s been kind of half and half. I will say that at first we thought it was going to be kind of loosey goosey, but I’ve realized lately just how important all of these parts are. It’s really about the cue—when a certain keyboard line comes in, when a little guitar riff happens. We’ve kind of taken it in our own direction, but we do generally keep it pretty faithful to the records.

Tell me about the Dead Man’s Party.

Chapman: It’s a Halloween party in June. We’ve got four bands on the bill—Lambda Celcius from Athens, Basically Nancy and Small Talk from here, and us. We’re going to have raffle prizes and costumes, and Jacob is going to be spinning goth tunes afterwords for a dance party all night.