The Mantras take their cue from anything and everything

Greensboro, North Carolina, band The Mantras are a really eclectic band with lots of different influences. You could call them a jam band, as they stylistically seem to live in the same general world as a band like the Grateful Dead, but—just like the Dead—they’re a lot more diverse than any categorization.

They’ve made a real name for themselves over the past several years around the Southeast, even creating their own festival in their hometown. That festival, Mantrabash, is scheduled for June 7 and 8 this year.

They’re currently on the road, and scheduled to swing through town on Sat., April 20 at Barrelhouse South. Ahead of their show, the band’s Keith Allen told us about their musical beginnings and what it’s like being part of the growing Greensboro scene.

How did this band come together?

A little over 15 years ago, we all somehow ended up in Greensboro, North Carolina. Which, by the way, is a super random town but has developed significantly since we all came together here.

We were basically all friends first who played music and then slowly started to coagulate a group. I think what really united us was our willingness to go as far as possible musically and not limit ourselves - a non-genre specific band. And we all get along and love each other, so that’s why we’re still here at the end of the day.

What would you say are some of your most prominent influences?

I know it’s cliche, but literally everything. You would be pretty hard-pressed to find someone that we don’t listen to or try to incorporate into our music.

Greensboro is a really great little place and it seems like some musical gems pop up out of there from time to time. That part of NC has a really rich musical history. What has your experience been like being a band in a place like Greensboro and part of the greater NC music history?

Greensboro is great! It’s very centrally located, which enables us to get to the rest of the surrounding state as well as up and down Eastern seaboard easily.

The town itself has come a long way with the music scene and just the culture in general. For a while, we toyed with the idea of moving to a bigger town, but we’re here to stay!

What does the writing process look like for you guys typically?

Most of the time one or two of us will bring in an idea and we’ll just kind of knock it around, add things to it and arrange it. All sorts of stuff.

It’s really pretty loose. Sometimes it’s just a riff or jam, sometimes most of the song is actually complete to the point of a full recorded demo.

You guys seem to really thrive in a live setting. What’s your favorite aspect of playing live?

Getting to air out all of life’s stress and just live in that moment.

Do you have a favorite or a standout show that you’ve done? Tell me about one that sticks out in your mind.

At our Festival Mantrabash in 2014, we had Bernie Worrel, keyboardist from P-Funk and Talking Heads, play a whole set with us. It was a “Talking Dead” set, which featured all Talking Heads and Grateful Dead mashups. It was the highlight of my musical life so far. He passed away shortly after but was so nice and a warm soul. 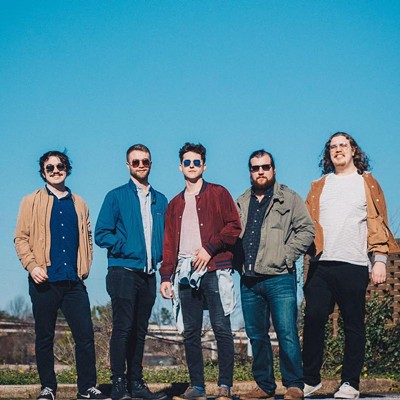