BY ITSELF, the clown art could be a red flag.

But somehow the dozen or so thrift shop paintings of sad, red-nosed hobos peering out from the wall of Jon Taylor’s studio are less creepy than compelling.

In fact, taken in context with the feathered top hat and the pair of red sequined stripper heels piled on the other side of the room, they make perfect sense. The disheveled clowns seem to reflect a sweet vulnerability, one of many facets comprising a colorful, complex fellow.

Voted “Most Crushworthy Savannahian” by Connect Savannah readers last year, Taylor might be objectified as just another blue-eyed, tall drink of water if not for his breadth of artistic disciplines. The SCAD grad can navigate Photoshop layers like a boss while creating air plant sculptures out of vinyl records, and his senescent home in the historic district has engendered an impressive proficiency with power tools.

The 24 year-old also keeps up a dizzying schedule with a bevy of local performance troupes, strutting (or sashaying, depending on the costume) between a cast of characters worthy of its own sit-com (TV-MA). 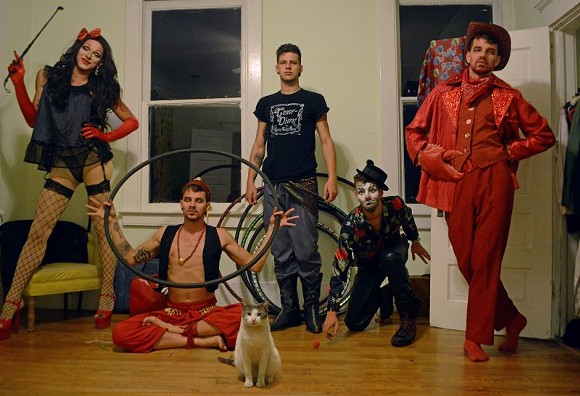 Nightcrawlers might know him as Rachel Fauxrelle, the bimboesque babe who sizzles and shimmies as part of the mind-stimulating drag collective House of Gunt. (The scarlet stripper platforms are hers, obvs.)

The brood also includes the meditative Cosmosis, spinning fire and twirling hoops with the multidisciplinary movement crew the Stardust Pixxies, regulars at the Savannah Bazaar and on the dance floor. (These whimsical flow artists will have their hoops and poi at Oatland Island’s Fairy and Gnome Festival May 7.)

Taylor’s stocked make-up case also contains the goods to transform him into his own clown persona, Kid Friendly, ready with his red nose to entertain at children’s birthday parties.

“He really is kid-friendly,” promises Taylor with an earnest nod.

Then there is Jack N’ Thacox, the smoldering sexpot who is definitely not for kids. (Heaven help you if you view his not-safe Vimeo channel at work.) The man in the thong got his start go-go dancing for tips at Club One, evolving into the first and only male performer with the award-winning Savannah Sweet Tease Burlesque Revue.

It is Jack N’ Thacox’s Sweet Tease performances that have captured international attention (possible due specifically to the golden ass tassels). Last year he did a turn (maybe several, around a pole) at NYC’s Boylesque Festival, which led to an invitation to next month’s London Burlesque Festival, a two-week pageant of glitter and glam that touts itself as the biggest in the world.

Jack will perform several times at the festival, including his piece “Jack the Tripper,” set to the sultry rendition of “St. James Infirmary” by local power soul band Ambrose. This is where the top hat comes in, as well as a bejeweled walking stick and velvet greatcoat—which won’t stay on long.

For Taylor, this tantalizing celebration of the bawdy and tawdry comes down to “character, costume, and charisma,” regardless of gender.

“It’s all burlesque,” he says, shutting down any temptation to relegate Jack N’ Thacox to the “boylesque” subcategory.

He counts local stage sirens Rita D’La’Vane (the flame-haired artist formerly known as Erin Go Braughless) and lovely Rebel Belle of Savannah Sweet Tease as his mentors, as well as House of Gunt’s Influenza Mueller, who has provided make-up tips and essential counsel.

“They’re amazing. To them, this is performance art. They have taught me everything I know,” he says, thrilled that the two troupes will collide for the sexy fairy tale collaboration “Disney Whirled” May 6-7.

It’s a rare animal that can, ahem, straddle the world of burlesque and drag, and Jack N’ Thacox’s undeniable masculinity is a striking contrast to the lip-glossed Rachel. Taylor says the two emerged around the same time, a parallel evolution of performance identities. Their overt sexuality is countered by the playful innocence of Cosmosis and Kid Friendly, and each character comes with his or her own mannerisms, social media feed and, of course, choreography.

Sometimes there is crossover, like when Jack channeled clown face at a 2013 Sweet Tease show and did some inappropriate things with balloon animals.

“And everyone borrows Rachel’s jewelry.”

He speaks of each persona as a separate entity, though he promises this is not a symptom of a permanent schism.

“I know they’re not real. I mean, I’m the one who has to keep track of all this shit,” he laughs, sweeping his arm past the overflowing closet and piles of shimmering bellydance scarves and various hairpieces.

But that doesn’t mean he isn’t driven by their existence—and the urge to entertain. He spends hours upon hours in this second-floor bedroom in the Victorian district, gluing rhinestones and choreographing routines for the flamboyant aggregate he calls “self-sploitation.”

“I have a vision, and I need to make it a reality,” explains the culture chameleon.

It’s a lonely effort, with no one but his cat and his clowns for company. It can also be exhausting, staying centered as he moves from one persona to the other.

Maybe there’s too many of them, he admits as he crosses the sequin-strewn floor to grab a hoop.

“Sometimes I’ll think Rachel needs to retire,” he ruminates as he tosses it in a smooth circle with one hand.

“But I just found an amazing dress, so she will carry on.”