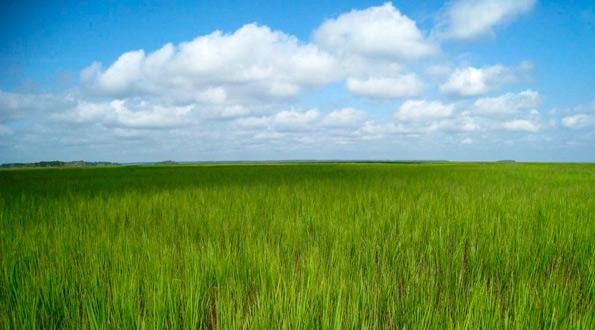 It’s a sight that has arrested many a soul around these parts:

The sun setting on the marsh, the sky impossibly large, the light otherworldly. Wrens flit between their hidden nests in clusters of Spartina grass that form walls along the waterways. Stepping further into the waist–high grass, one can almost hear nature’s slow clock that governs the breathing of the tides.

It is with this great reverence that Charles Seabrook writes about the salt marshes that cushion Savannah and her surrounding islands and stretch up to Cape Hatteras, North Carolina and down to Cape Canaveral, Florida.

A native of John’s Island near Charleston, South Carolina, Seabrook spent 35 years traveling the world and seeing its many wonders as a science reporter for the Atlanta Journal–Constitution. Yet in his new book, The World of the Salt Marsh, he extols his childhood stomping grounds as “the most wondrous, magical place of all.”

“Driving over the bridge to Tybee Island or speeding down I–95, you don’t get to see how much life is living in there just off the highway,” sighed Seabrook in a phone interview last week. “Too many people think of the marsh as this great wasteland.”

Inspired by Sidney Lanier’s famous poem The Marshes of Glynn, Seabrook describes the “cathedral–like canopies” of Spanish moss–draped live oaks, the bounty of mullet and oysters in the sticky mud flats and the twinkle–eyed wisdom of his Gullah neighbors with a lyrical nostalgia. But his tone turns serious when depicting what has happened to the marsh since he was a boy: The developmental destruction. The toxic Superfund sites. The decreasing wildlife.

“I wanted to tell the stories of the marsh, but I knew I needed to bring in the science, too,” he said. “I wrote this for the layperson, so that everyone could understand what a resource this is.”

The World of the Salt Marsh isn’t just a longing for the good ol’ days; it’s a call to action.

As Seabrook carefully spells out, the loss of the marshes poses frightening practical losses for all who live on the coast. The tidal marshes are not only some of the most self–sustaining food sources on the planet; they keep back hurricane surges and provide filtration for water and air.

“If we are to really appreciate this great ecosystem and understand what will be lost if we destroy it, we must also understand its crucial role as a cleanser of precious water, a recycler of nutrients, a protector of the shore when fierce storms blow in from the sea,” he writes.

Seabrook will be in Savannah to discuss and sign copies The World of the Salt Marsh this Saturday, Nov. 17 at The Book Lady. Part of the proceeds from the sale of the book will benefit Center for A Sustainable Coast, an organization that has been working to “improve the responsible use, protection, and conservation of coastal Georgia’s resources” for over 15 years.

The booksigning also kicks off the Salt Marsh Art Show that will also raise funds for CASC and features the work of Betsy Cain, Harry DeLorme, Melinda Borysevicz, Marcus Kenney, Christine Sajecki and many more local artists who have been inspired by the marsh.

“We’re showcasing work that artists do in relationship to the salt marsh, but the work is incredibly varied,” muses Cain, who put out the call to her fellow artists for the show. She adds with a laugh, “It’s completely undercurated.”

Indeed, Borysevicz’s rainy–day island vista juxtaposes with DeLorme’s captivating collage created from pieces of found plastic, yet the majestic theme of the marsh circulates throughout the show.

Cain has hung a painting in the benefit show as well as a large photograph. Taken from the west side of Ossabaw Island facing back towards Skidaway Island, she feels this view of the marsh and sky “really distills it down to the essence.”

Cain has lived on the marsh on the backside of Wilmington Island for 20 years. “I call it living on the edge of the continent,” she says. “We could fall off into the mud at any moment.”

As for Seabrook’s new book, the longtime Savannah artist “swallowed it in one gulp.”

“Everyone who lives here should read it,” suggests Cain. “It gives a deep understanding of where we live.”

While there have been political victories in the fight to save the tidal marshes of the South Atlantic coast such as the Coastal Marshlands Protection Act, pernicious budget cuts continue to strangle their enforcement by state agencies up against the deep pockets of development and industry.

Seabrook remains one of the land’s most vocal lovers and fighters.

The problem is the laws are already there,” he exclaimed on the phone. “There are just so many trying to thwart those laws and no one there to carry them out.”

Yet he remains hopeful that those who live along the coast can and will overcome the evils of unchecked enterprise.

“In many places the ecologist, the poet, the conservationist, the politician and the lawyer have risen up together to save and protect the marsh from destruction,” he reminds us in his book.

“But the battles continue; we must be vigilant.”

Where: The Book Lady, 6 E. Liberty