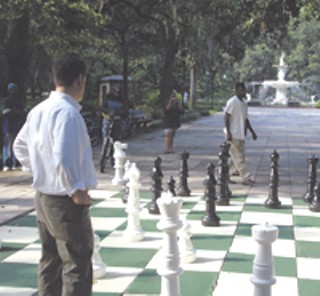 LAST TUESDAY evening in Forsyth Park, Autumn Hennessy sat in silence on a shaded park bench south of the big fountain. With her mother nearby, Autumn sat alone among 40 or so people observing the first night of play on a giant chess board painted in muted green and beige on the park’s concrete walkway.

At the age of “almost 5,” Autumn was far younger than most others watching the inaugural series of chess matches. Out for her regular early evening stroll with her mother Suz and infant sister Esmee, Autumn observed the goings-on like an old pro.

“I like the green and white, and the chess pieces,” she said. “The black team got four pieces, and the white. They’ve got the same amount.”

As of last week, giant outdoor chess is new to Savannah, but not to Autumn. “You saw them in Portugal, remember Autumn?” prompted her mother, recalling a vacation last year, prior to the family’s move to Savannah from their home in England.

“I don’t remember that.” She paused.

“Okay, I do,” she said, then lost interest in the game to pat the head of Lexi the dog, out on a walk with her owner, publisher Frederic Beil.

Like the Hennessy’s and Beil, Inoussa Kouama stumbled by chance onto the newly painted board game. A native of Burkina Faso, Kouama was on his way to catch a bus back to his southside home, after meeting with local community leaders in hopes of launching a Pan-African Festival in Savannah later this year.

“I think it’s cool, seeing people play games instead of doing something else,” he said. “I watched my dad play since I was a kid. My dad is a politician. Politicians like to play chess.”

The chess board has been in the works for several months, starting as an idea in the head of Chris Miller, the guy with the pony tail and the paradoxical “gee whiz/can-do” attitude. To garner enthusiasm for the chess board, Miller used the same “do it yourself and work with the system” approach that pulled together local support for his past projects — The Creative Coast Initiative (now The Creative Coast Alliance) and lectures by urban visionaries Richard Florida, James Kunstler, and Charles Landry.

After securing permission from the city’s Park and Tree Department, Miller took a live oak tree leaf to a paint store to create a matching green concrete stain for the dark colored chess board squares. “The beige is the trim color from buildings at Park and Tree,” said Miller. “Department director Dave White was very enthusiastic about the idea, and helpful in shepherding it through” the approval process.

For several weekends last month, Miller painted the board onto the concrete himself, with help from a few Forsyth Park regulars he met along the way. Preliminary help also came in the form of another Miller—Willie Miller, a downtown fixture and whiz at chess, who helped test out the two-to-three feet tall pieces on Gaston Street earlier this summer. Miller played two matches Tuesday, winning the first and losing the second.

“You know they do this in Europe all the time,” he said. “I like the whole ordeal, it’s comfortable, relaxing, it’s a peaceful, thinking game.”

After watching several matches, Chris Miller stepped up to the board, taking on opponent K.C. Drummer, familiar to many downtowners for making flowers out of palmetto fronds. “You have a lot of spectators coming by which I’ve never seen before,” said Drummer. “It’s very promotable.”

“It’s not going to change the world, eliminate poverty, or improve the schools. But all it takes is one kid to see something new that he hasn’t seen before and have it change his life in some small measure,” said Miller.

“Chess teaches kids strategy, delayed gratification, how to lose gracefully. It’s a metaphor for success in life. Of all the things I’ve done, this is the one I’m the most proud of.”

Hours for the Forsyth Park chess games are Saturdays and Sundays, noon-5 p.m.