The Gospel of the Muralcle on 34th Street

IN THE BEGINNING, there was a bare brick wall.

Then, the Voice of Creation—speaking through a bunch of local folk who like to paint stuff—said, “Let there be art!”

So the local painter folk sought blessings from the Powers That Be and made art on the wall where there had once been nothing.

Soon a majestic abstract marshscape swept across the concrete bricks, followed by a meadow of portraits blooming with a colorful cross section of city denizens.

Later, a gorgeous sea goddess rose from the cinderblock to preside over the empty lot at Habersham and 34th Streets in hues of teal and purple.

The artists—along with the neighbors and the bureaucrats—saw that it was GOOD.

Sadly, as of last Thursday, it is GONE. 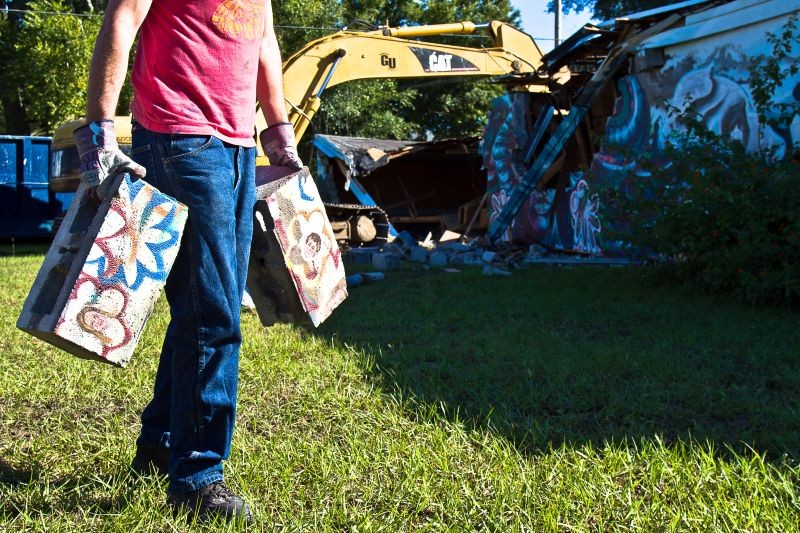 Jon Waits/@jwaits
Artist Matt Hebermehl hauls off the remnants of the mural on Habersham and 34th streets.

Baptized “The Muralcle at 34th Street” in February 2012 when it became the first legal public art mural in the history of the City of Savannah, the wall was sacrificed to the bulldozers of progress as the long- vacant edifice it adorned was demolished.

Locally-owned Enright Properties acquired the foreclosed-upon property from the bank last year, and the half-acre lot will soon house a mix of apartments and retail space on what for a couple of years served as sacred ground.

No amount of supplication could amount to a divine intervention. In a few deafening cracks, the beloved kaleidoscopic vista was leveled in a cloud of dust and asbestos.

Jon Waits/@jwaits
The bulldozer takes down the wall

“We would have liked to save the mural, but the building itself just isn’t salvageable,” contractor Joe Duckworth lamented apologetically as the Caterpillar’s mighty claw tore through Adolfo Alvarado’s oceanic deity to reveal a garage of rotted wood. “It just couldn’t be helped.”

For those who worship at public art’s grand altar, the demolition felt like desecration. A small but devoted crowd came to the vacant lot to bear witness to the mural’s crumble, many of whom had been there for the first swathes of paint. Some had sat in the summer sun for a chance to be immortalized within the latex layers.

Like pilgrims at Lourdes, we were somber but serene, hauling off the best bits of concrete as if handling holy relics.

“I brought my students out here just a few weeks ago to teach them about abstraction and design,” mourned SCAD professor Heather Szatmary as she schlepped pieces of Katherine Sandoz’s Turtle Island landscape. “They’re going to be heartbroken.”

Something of an artistic zealot myself, I waited solemnly for the piece of concrete to fall on which Troy Wandel painted my likeness in back in June 2012, hoping to lay it to rest in my garden among the precious plaques of my children’s handprints.

When the brick threatened to dissolve under the claw’s rough scrape, Richard Marlowe of Groundworks Unlimited stepped off the ‘dozer to kindly chisel it away by hand. I think he recognized my righteous fealty, good man.

I might have broken out the hairshirt if the reluctant priest of this particular parish hadn’t reminded everyone that there was really no need to be so damn fanatical.

Even as he conceived it back in 2011, artist/activist Matt Hebermehl had known that the wall might have to come down.

The property’s neglect was what made it prime art space in the first place, and the eventual transfer of ownership would mean its inevitable declension.

“This was the test case,” shrugged Hebermehl as he maneuvered a wheelbarrow piled with blocks to the edge of the lot. “It was the petri dish where we found out what was possible. But a lot has happened since.”

Preach it, brother: In the two and a half years since he and SeeSAW cohort James “Dr. Z” Zdaniewski put on suits and ties and convinced City Hall to adopt a mural policy under the MPC’s Site and Monument Commission, Savannah has seen several notable public art projects. Walls in Midtown, on MLK Blvd. and at the West Broad Y have hosted color and concept.

SeeSAW’s “Before I Die” crowdsourced blackboards weren’t without controversy, but it is our city’s mural that now graces Candy Chang’s hardcover book out of dozens of others that participated in the project.

And since my kvetchy sermon last month about the dearth of public art around here, new rumors abound that something splashy could be brewing near Victory Drive and Drayton.

We can also be consoled that another mural might be resurrected from the rubble like Lazarus from the crypt. Enright Properties’ Jeremy Graves has enthusiastically endorsed the idea of public art on the new complex, ideally on the side of the corner café planned for the site.

“I’d love to incorporate another mural once the project is finished,” said Graves on the phone last week. “There’s going to be a whole wall of masonry that would be perfect.”

It’s difficult to predict how new development will shape a neighborhood, and we can only pray that the Powers give the same thoughtful consideration to high-density housing as they do to mural proposals.

(Which reminds me: There is still a spot available on the Site and Monument Commission, along with a whole host of other city board openings, including the MPC. If you have the spiritual strength to face the devil in the details of this city’s future, go to savannah.gov to apply.)

In the meantime, the faithful must remember that just because the mural is gone doesn’t mean the miracle wasn’t real.

The gospel of public art is now a sanctioned reality in Savannah—an egalitarian way to create conversations that can become the foundation of a community that values art and artists. Every wall is a chance for communion, but there’s no need to express one’s creative piety with blasphemous scrawls. We can venerate the Muralcle at 34th as a sacrificial lamb that makes way for a new testament.

“It just means we need to make more,” grinned another ever-upbeat evangelist of the cause, ArtRise’s Clinton Edminster, as he carried off another brick.

I can’t think of a better benediction.