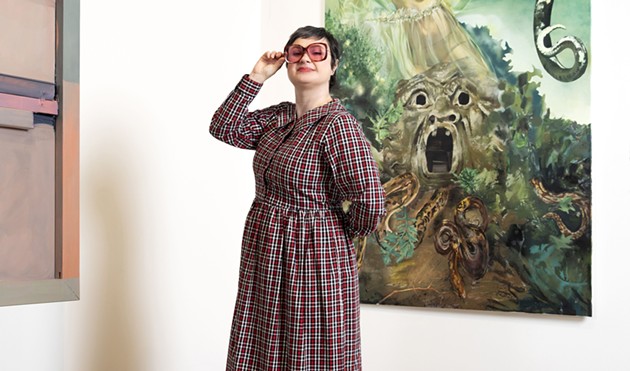 Photo courtesy of SCAD
Polish artist Paulina Olowska at her new "Mainly for Women" exhibition on view at the SCAD Museum of Art.
Growing up alternating between two worlds at opposite ends of the Cold War – her native Poland and the U.S.A. – Paulina Olowska was immersed in the artificial aesthetic constructs of both societies, and they equally influence her oft-irreverent artworks that intentionally subvert patriarchal conventions to assert the autonomy of womanhood. In the new Mainly for Women exhibition now on view at the SCAD Museum of Art through July 11, several of Olowska’s most striking paintings are on display alongside works by a younger generation of Polish women who primarily only experienced traces of the Soviet influence that once dominated every aspect of life in their country, especially regarding creative expression. In organizing this exhibit, Olowska aimed to provide an international showcase for these women while carrying on discourse in her longtime quest toward achieving gender parity in art and society. “I love a sense of a dialogue in art,” Olowska said while visiting Savannah in early January, just before the exhibit’s premiere. “You can say that I’m a painter, but within my paintings I negotiate or collaborate with other artists.” Born in Gdańsk on Poland’s Baltic coast to a family of artists in 1976, Olowska spent her earliest years in a nation firmly under Kremlin control and awash in communist propaganda. At this time, photorealism was the prevailing genre in painting across the Eastern Bloc, partly because the Soviet authorities were hard-pressed to interpret subversive messages in artworks that meticulously mirrored real-life scenery.
click to enlarge 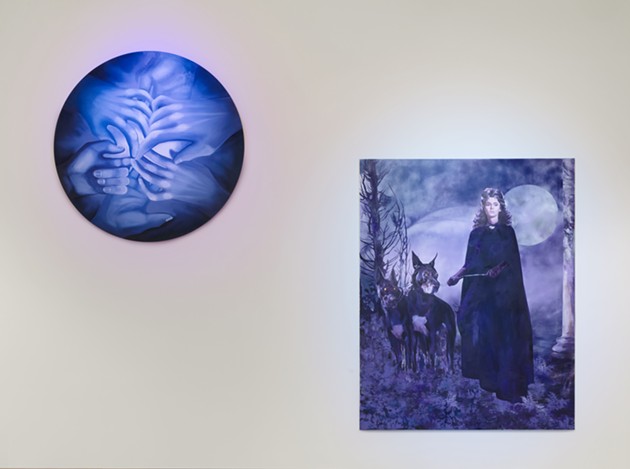 Photo courtesy of SCAD
The new "Mainly for Women" exhibit features artworks by Paulina Olowska and other women Polish artists.
During her early childhood, Olowska’s father joined Poland’s Solidarity movement founded in 1980 at the Lenin Shipyard in Gdańsk, using civil resistance against the Soviet system to advance workers’ rights and social change. This led to his fleeing to the U.S.A. as a political refugee with his young daughter in the mid-’80s, and here she experienced a complete contrast of aesthetic surroundings shaped largely by pop art and corporate advertisements. Olowska went on to study at the School of the Art Institute of Chicago, the Fine Arts Academy in Gdańsk, and Amsterdam’s Rijksakademie, cementing her unique blend of international influences. Her works have been exhibited at the Venice Biennale, New York’s Museum of Modern Art, and London’s Tate Modern, establishing her as a leading Polish artist who strives to use her platform to advance women’s rights with works that evoke an enigmatically nostalgic atmosphere of cross-cultural aesthetics. Some of Olowska’s paintings on view in Mainly for Women playfully combine visions of East meeting West, exploring female archetypes through a lens of appropriation and homage.
click to enlarge Photo courtesy of SCAD
In Olowska's work labeled “MONOLOGUE” a young woman stands with a voguish pose reminiscent of a Versace magazine advertisement.
In her work labeled “MONOLOGUE” a young woman stands with a voguish pose reminiscent of a Versace magazine advertisement, but her visage bears a stark expression of determination commonly seen in Soviet-era photorealism propaganda, while her farmland setting and held pail of water reflect anything but the glamorous life associated with high-fashion imagery. For Olowska, this painting is a quintessential product of her varied perspectives coming together to skew popular culture bestowed upon different societies by patriarchal forces, causing the viewer to question the subjugation of womanhood in all nations and political systems. “How do you negotiate modernism? How do you negotiate socialist art?” Olowska asks when explaining her creative perspective and the process of finding its role in all worlds. “You learn how to work with material, but how do you work as an artist with the idea of life?” The exhibition’s title is also a play on male control over even the most intimate aspects of womanhood. Mainly for Women was the title of a 1960s “guide to love making” by Robert Chartham, which provides a biological play-by-play for how women should approach intercourse with a primary concern of avoiding the infliction of harm to their male partners’ sexual self-respect. “Now we can laugh at it, but it was reality,” Olowska said of the book, a copy of which is included in the exhibit amid a melted puddle of dark goo on one corner of the floor.
click to enlarge Photo courtesy of SCAD
A copy of the book "Mainly for Women" is included in the exhibit amid a melted puddle of dark goo on one corner of the floor.
In the service of highlighting gender iniquities, the varied works in the Mainly for Women exhibit sometimes touch on the grotesque to portray multiple representations of women’s perspectives on society, enhanced by the artists that Olowska invited to exhibit alongside her – Karolina Jabłonska, Dominika Olszowy, Agata Słowak, and Natalia Załuska. The group show features pagan motifs and takes on a séance-like quality not unlike a coven’s display of powerful autonomy. “The house Olowska is building in her work is not a place of imaginary returns, but a site for gathering sister spirits,” wrote author Jan Verwoert of Olowska’s lifework. In Mainly for Women, Olowska is warmly welcoming her fellow female Polish artists and Savannah art lovers into this revealing and thought-provoking house. “I wanted to touch on the idea of narration and sharing a story,” Olowska said. “I’m very proud to see this younger generation of artists.” Mainly for Women is on view at the SCAD Museum of Art (601 Turner Blvd., Savannah) through July 11; visit scad.edu/calendar/exhibitions for more details.