Hear songs from their 2020 album ‘Peel’ live at Barrelhouse South 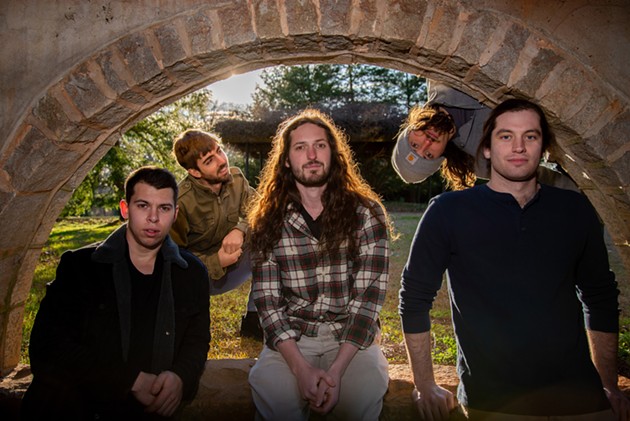 Photo courtesy of The Orange Constant
The Orange Constant, playing at Barrelhouse South in Savannah on Saturday, Jan. 23.
With stages remaining silent due to the ongoing COVID-19 pandemic, catching any sort of live music is like kneeling at the altar of a mutual enthusiasm for normality. However, to classify The Orange Constant as “any sort of live music” is an injustice to this regional group that has become one of the best live-performance bands in the Southeast. Read that again: the best. So, when they return to Savannah and plug in at Barrelhouse South on Saturday, Jan. 23, it would absolutely be a missed opportunity to sit out this show. “Savannah is one of the few places we can actually play right now, and the band has been playing at Barrelhouse for longer than I’ve been in it,” said keys player Chris Freiberg, who joined the band in 2016. The five-piece ensemble, which began in Statesboro and later relocated to Athens, started in 2012 with guitarists Andrew Brantley and Nickalous Benson. Over time they were joined by Freiberg, bassist Tyler Walker, and drummer Sam Groveman. Together they play an intriguing combination of Southern rock, funk, and prog that inspires ambient qualities of vintage and experimental sounds. The atmosphere of their live shows can often feel like a late-night jam session, depending on the receptivity of such auditory revelations by the audience, which Frieberg contends is very deliberate. While improvised fills have allowed the band to don the jam-band crown, their most recent time in the studio was spent playing technically precise and artfully designed instrumentals that are now the signature of what has evolved into The Orange Constant sound.

“Savannah is one of the few places we can actually play right now, and the band has been playing at Barrelhouse for longer than I’ve been in it.”

The troupe released their third studio album, Peel, this past May, returning to the producer of their first album, Time to Go, Grammy-nominated legend John Keane. Keane, who has worked with globally successful bands such as R.E.M. and Widespread Panic, played a big role in the influence of the album’s mechanics of full-bodied, repetitive riffs and fine-spun harmonies. “Our last album [Point of Reference], we worked with producer Drew Vandenberg, and he had a lot of influence in our sound,” recalled Freiberg. “He had this indie, experimental style and played a lot with tone. With Keane, it was more from a polished and technical approach. It was less about the natural take and more about precision.” There’s a natural evolution from Time to Go to Peel, but considerable differences in tone and texture can be heard between the band’s second and third album, which has three years between them. “You can hear the difference projected in both albums,” Freiberg adds. While the new album has received commentary that described the band’s nine new tunes as being contextually darker and heavier, many will contend that the music remains upbeat and lighthearted in nature. This alone posed some challenges amid a COVID-stricken release that could feel tangibly disconnected. “That was part of the problem when the pandemic hit,” explained Freiberg. “But we didn’t have the vision to put out a politically current album." Peel was pushed back a few times from being released, but when it finally took flight, it landed just right. Synth sounds of the ’90s, a familiar and codependent sound of psychedelic-tones-meet-funk-rock rhythms, and, surprisingly, tinges of contemporary blues all take listeners on a blissful journey that is more than welcome during an uncertain and dreary time. A time, in fact, that the band is weathering rather well, considering. “We know other bands in our scene who might not come back from this,” said Freiberg. Thankfully though, for music lovers, it looks like The Orange Constant will remain a constant fix for quite some time to come. The Orange Constant concert: Saturday, Jan. 23, doors open at 9 p.m.; Barrelhouse South, 125 W. Congress St., Savannah – visit theorangeconstant.com to learn more.