The Platters come to town for a night of musical nostalgia

THE PLATTERS have numerous hits under their belt, having been one of the most successful vocal groups of the early days of rock and roll.

Since forming in 1952, the group has garnered considerable, consistent acclaim and continues on to this day with a lineup of new voices. Those new members carry on the legacy of the group cemented by the late Herb Reed, whose company still maintains ownership of The Platters’ name.

These days, the group is touring with the hits but also planning new music in 2019 - including an upcoming single release.

Lance Bernard Bryant, an accomplished singer who has been with The Platters for three years, is one of four vocalists involved in the current version of the group. That group, alongside The Drifters and Cornell Gunter Coasters, will be in town for several performances at the Savannah Theatre on Jan. 18 and 19.

Ahead of the shows, we talked to Bryant about the group’s legacy and its future.

Tell me about your career. What led you to joining The Platters?

LBB: I’ve been singing professionally since I left college in 2002. Before that, music was a part of my life growing up. My grandmother was very active in her church community and taught each of us how to sing. She was always very proud of me for being the one to carry on with music. I went on to study at SUNY Fredonia, and received my Bachelor’s Degree in vocal performance there.

I spent some time singing with a cappella groups on cruises, and during that time I’d moved to Las Vegas. I was connected to the music program at The Venetian, where classically trained performers sing Italian art songs and opera. While I was there I got connected to Cirque du Soleil through a production that I was doing, and that took me to China where I was a resident artist in their show for a little under a year.

At the close of that show, I moved to New York and a friend of mine told me about an audition for a vocal group. I had no idea what I was getting involved with. I showed up to the audition and sang, and that group ended up being The Platters. 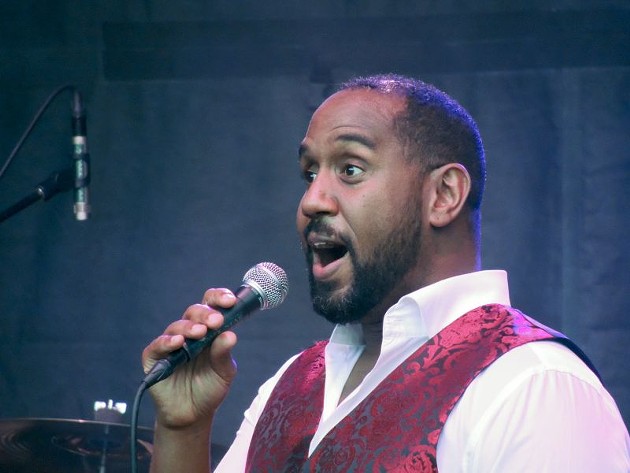 Prior to that, were you a fan growing up? What was your relationship like with the group and its music and history?

LBB: To be honest, I was very familiar with the hits. Most people know “The Great Pretender” and “Smoke Gets In Your Eyes.” But I didn’t know much of the back catalog and didn’t know a great deal about the backstory and history of the group. But once I joined, immediately the first thing is you’ve got to know the history.

You start diving into all the songs.

LBB: Right! There’s just so much beautiful music that the group has done over the years. It’s really an amazing story, when you learn the history.

You’ve done a lot of shows since then - what’s one moment or show that stands out in your mind over the last few years of being in this group?

LBB: Oh wow! I almost want to answer two [laughs]. One is for personal reasons, and it’s a performance that we had in Sarasota. That was the first time that some of my father’s family members ever got to watch me perform. It was amazing to be able to do so with this group that’s such an important part of music history.

The most memorable performance overall, as far as being a member, was when we performed at Mohegan Sun. I don’t remember the year, but that was really the first time that I’d been in an arena show with the group. To see that large of a crowd and that many people so engaged in the music and showing so much love for the Platters’ music was very overwhelming.

Tell me about the show coming up with the Drifters and the Coasters.

LBB: This isn’t the first time that this group of artists have been together to perform this particular show. It’s been a lot of fun. We recently spent about three weeks with the same trio touring the midwest, and we had a blast. We joke around backstage and watch from the wings to support each other. It’s a wonderful environment, and it’s great music.

If you could narrow it down to two songs, what would be your top two favorite songs to do in a typical Platters set?

LBB: There’s just something magical about “Smoke Gets In Your Eyes” that takes people places, and I love to see that and feel that energy. The second song that I love that we perform is a brand new song from the Platters called “It’s My Time.” Knowing the history of the group, and being a part of that continuation forward, it’s another one of those moments where I get overwhelmed in the emotion of it.

It’s nice to see people get connected to the music in a live setting, and to share in that together in a big public space. There’s so much peace and positivity in the air in those two moments.